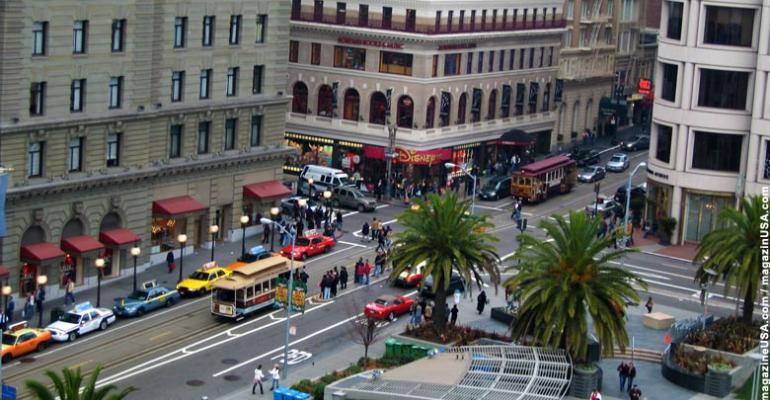 Rents have been sliding and retailers consolidating, but investor interest in one of San Francisco's most iconic shopping districts remains on solid footing.

Macy's (NYSE: M) latest $250 million deal to sell its I. Magnin building in Union Square caps off a string of recent transactions expected to transform the downtown retail hub. A Silicon Valley-based affiliate of Sand Hill Property Co. snapped up the 250,000-square-foot site at 233 Geary St. for about $1,000 per square foot and plans to invest even more capital in upgrades and improvements.

Over the past few years, retailers and investors have cashed in on rising Union Square values. More than $833 million in deals have closed since 2016 as investors eye the tumultuous retail market as a chance to reposition their new purchases.

More than 155,000 people visit Union Square daily, and those visitors translate into tax revenue for the city. Union Square merchants generate more than 13 percent of the city's total sales tax proceeds, according to a report from the Office of Economic and Workforce Development.

"This is one of the most important markets in the world," said CBRE Senior Vice President Laura Sagues of the city's appeal among retail tenants and investors. "It's driven by tech, tourism and an extraordinary amount of venture capital money that's flowing just into San Francisco. That isn't going anywhere, it's structural."

Flip through the slideshow for some of the highest-priced deals for Union Square's retail buildings over the past three years.