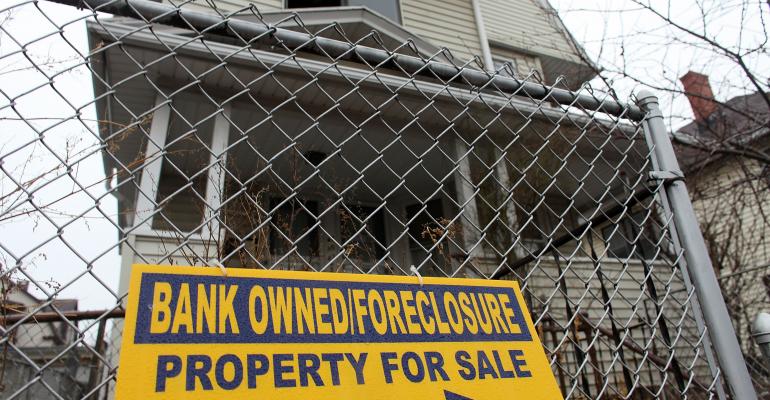 Apollo's Push Into a Lending Business That Others Call Predatory

(Bloomberg)—Eight years after subprime mortgages all but disappeared, U.S. buyers with bad credit can still own homes. If they come up with a nominal down payment and stay current on their monthly bills, they’ll get title to the property -- after as long as 30 years. If they miss one payment, their contracts say they could lose all their money and get tossed out.

The deals often end badly for low-income buyers. Some are financed by Apollo Global Management.

While Apollo’s stake in the business is small compared to the $170 billion it manages, most other high-profile investment companies have steered clear of what Apollo calls “seller-financed” transactions. Some investment firms are wary of how involvement could damage their reputations, and they’re unwilling to put faith in the existing group of local operators, according to people at six companies with direct knowledge of their dealings.

“It’s so predatory in nature,” said Tim Herriage, chief executive officer of 2020 REI Group in Dallas and former managing director at Blackstone Group LP’s B2R Finance. Herriage knows this niche of the housing market well: As a partner in a Texas real estate firm, he used the strategy until 2006. “It doesn’t pass the sniff test for me anymore. You’re telling someone, ‘You have all the responsibilities of a homeowner but none of the rights.’”

Housing contracts and other lightly regulated transactions are proliferating in the new financial system that’s emerged since the 2008 crisis. As the biggest banks retreated from mortgage lending, and the market for riskier borrowers dried up, firms such as Apollo -- so-called shadow banks -- have filled the void. Whether the process is called a land sale, contract-for-deed, bond-for-title or something else, the idea is the same: While it gives some low-income Americans a path, though long and winding, to homeownership, it can also be a way for investors to profit from borrowers who don’t qualify for mortgages.

Charles Zehren, an Apollo spokesman, declined to comment on the home-selling strategy. On a November conference call with analysts, Michael Commaroto, CEO of Apollo Residential Mortgage Inc., said that he didn’t expect the firm’s investment to grow until “we get really comfortable with financing.”

“We continue to explore ways to finance these assets in order to enhance the overall return on equity for this program,” Commaroto said.

Documents show Apollo’s partner is Baton Rouge, Louisiana-based Home Servicing, whose agreements give buyers few of the privileges they’d have in either a mortgage or a rental contract. George Caballero, Home Servicing’s corporate counsel, declined to comment.

In a rental, the landlord is obligated to do repairs, pay taxes and maintain insurance. In Home Servicing contracts, the buyer is responsible.

While the Home Servicing contracts vary by state, dozens reviewed by Bloomberg show the buyer doesn’t own the home or claim to the deed until the full purchase price is paid off, as many as 30 years later. In many cases, if the buyer fails to keep up to date on insurance or is more than 30 days late with a payment, the buyer forfeits all money and interest in the property.

“There are fewer consumer protections that apply to these transactions than to mortgage loans in most states,” said Sarah Bolling Mancini, an Atlanta-based attorney with the National Consumer Law Center. “Generally, it’s easier to take a property back quickly if the borrower defaults on payments.”

The laws governing the contracts vary by state, and since they aren’t mortgages or rental agreements, they fall through the cracks of most federal regulations.

KKR & Co., run by Henry Kravis and George Roberts, is the main other prominent private equity firm that invests in the business, with an investment of as much as $40 million in New York-based Battery Point Financial. KKR’s Kristi Huller declined to comment.

“The liquidity and reputation risk has scared people off over time, but I think that can change,” said Jeremy Healey, who founded Battery Point in 2013.

Battery Point’s approach is different from Home Servicing’s. Battery Point said it’s working to report monthly payments to credit agencies so buyers may be able to get mortgages if they improve their financial profiles. If the company sells a home following a default, it pledges to only take the remaining amount of money it was owed and refunds the delinquent owner any extra, according to the company.

Home Servicing has acquired more than 400 houses, mostly in Southeastern U.S. cities such as Memphis, Tennessee; Columbia South Carolina; and Baton Rouge, paying about $4,500 to $100,000 each, according to property records and data from RealtyTrac.

Home Servicing buys the properties, then markets them for sale. In many cases it assigns the seller’s interest back to an Apollo-owned trust, documents show.

Marie Simpson, a 63-year-old Columbia resident, was introduced to Home Servicing by signs near the home she’d been renting for the past 19 years. “Buy, Don’t Rent,” they read.

“The reason we went this route is because I didn’t think our credit was up to par,” said Simpson, who works for the state’s probation and parole department.

She and her husband agreed in June to pay $106,900 for a three-bedroom house, almost double what Home Servicing paid for it less than a year earlier, according to public records.

The biggest draw was the down payment of $2,000, she said. The couple will own the house after 30 years of making monthly payments of about $762, according to their contract. The interest rate came to 7.9 percent. For prime mortgages, the rate has been under 4 percent since the beginning of the year, according to Freddie Mac.

Simpson said she doesn’t know what options she and her husband would have if they wanted to move before the 30 years were up, and whether they’d be able to hold on to any equity they’d accrue by making monthly payments. She needs to go back and finish reading the paperwork, she said.

Simpson’s contract, like others in South Carolina, says the agreement can’t be recorded in official records of the clerk of court in any county.

About 3.5 million U.S. households had housing contracts in 2009, according to the Census Bureau. The agency stopped asking Americans specifically about land contracts in the years since.

A 2012 study on people with the agreements in Maverick County, Texas, showed that 45 percent of them were canceled within a 23-year period, an indication that many residents lost money on the deals. Fewer than 20 percent of the people with contracts ever became full owners of the properties, according to the study by University of Texas at Austin.

While these types of agreements can sometimes benefit buyers with no other avenues to homeownership, they have a “predatory history,” particularly in minority communities, said Sarah Edelman, director of housing policy at the Center for American Progress in Washington.

“In my experience, about 50 percent of people default or move out in the first year,” said Herriage, who’s now buying, flipping and renting homes and lending money to real estate investors. “When you look at neighborhoods where this is prominent, most are well below the median home price for that metro area and the person obligating themselves to payments is almost always going to be below the poverty line.”

Since the housing crisis, homeownership continues to be a significant source of wealth. It’s linked with increases of as much as $10,000 in net wealth for each year a home is owned, according to a 2013 report by Harvard University’s Joint Center for Housing Studies. By contrast, renters generally experience fewer wealth gains.

Home Servicing advertises the properties on the website Buydontrent.com. Below each house, a caption reads: “Don’t waste money on rent. Easy owner financing available! You may be able to own a home even with bad credit.”

The same properties listed on the real estate website Zillow.com are “available on a rent-to-own basis,” a process that involves leasing with a legal option to buy, different from the bond-for-title agreements used by Home Servicing. Home Servicing also uses the term “owner financing” on its ads. When Apollo executives talk to investors, they call it “seller financing.”

While Simpson was moving into her new home, she said she discovered the air conditioner was broken and there was no hot water. Even though the agreement was for the home “as is,” Home Servicing sent a repairman, she said.

“There are still things that need to be done, but it takes time,” Simpson said. “We knew what we were getting into.”