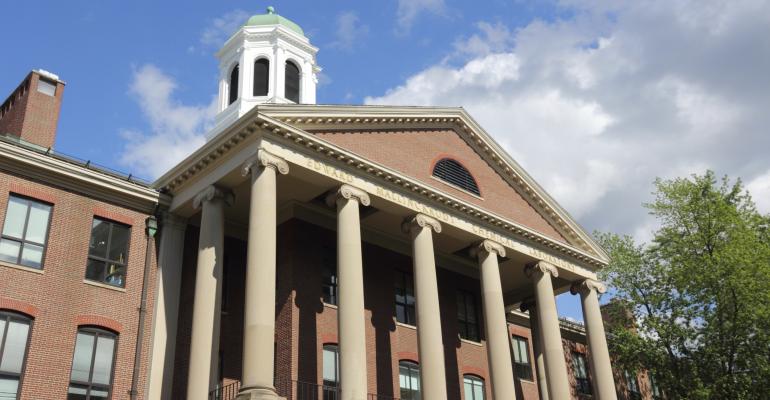 Bain is forming a real estate division to manage the portfolio and hire the Harvard team, according to a statement Friday announcing the agreement.

The deal, effective Feb. 1, represents a significant expansion for the Boston-based private equity firm and a step forward for the university as it overhauls Harvard Management Co., which manages the $37.1 billion endowment. The portfolio consists of direct investments in more than 350 properties.

Bain is forming a real estate division to manage the portfolio and hire the Harvard team, according to a statement Friday announcing the agreement. The unit will be led by Dan Cummings, who started the group at Harvard in 2010 and expanded the portfolio by taking direct stakes in property in addition to investing in the sector through outside fund managers.

Adding a real estate unit rounds out the lineup of investment offerings at Bain, which has steadily expanded since its founding by Mitt Romney and others in 1984. The firm currently manages $85 billion across private equity, credit, public equity, venture capital, impact investments and life sciences.

The expansion also follows similar moves by peers including Blackstone Group LP, KKR & Co. and TPG. Blackstone, the biggest of the alternative-asset managers, has derived half of its pretax profit this year from its real estate business.

Under Bain, the real estate group will have enough capital to continue supporting existing holdings but may seek to raise outside money after developing a business plan, said Lavine.

Harvard Management is committing to invest with the group in the future, a person familiar with the matter said, asking not to be identified because the details are private. A spokesman for Harvard declined to comment on the scale of the commitment.

The existing portfolio of direct real estate investments is mostly focused on the U.S. and will likely continue to be, Cummings said in an interview. The team invests around large themes, such as aging populations, life sciences, millennial lifestyles and urbanization, he said. The group is comfortable taking development risk and often invests additional money in properties after its initial investment, he added.

The Harvard team considered becoming independent a year ago and also had discussions with multiple investment firms and asset managers, according to Cummings. He started conversations with Bain managing partners Lavine and John Connaughton about six months ago.

Lavine said that to consider a strategic addition such as this, a group has to approach investing in a similar way to Bain and do deals that the firm’s partners would participate in with their own money. Bain was attracted to the way Cummings’s team takes a thematic approach to dealmaking, Lavine said, rather than simply betting on factors such as interest rate movements or demand for commercial real estate in major cities.

“If you took out the words ‘real estate,’ what they are doing sounds a lot like the way we describe our other businesses at Bain,” Lavine said of the incoming group.

The property portfolio has been among the best performing in Harvard’s endowment. The direct real estate strategy gained 20.2 percent in fiscal 2016 while the total real estate portfolio returned 13.8 percent that year, according to an annual report. The university didn’t break out performance for individual asset classes in the most recent fiscal year.

Harvard, the world’s richest school, is spinning out the team and its portfolio because new management is overhauling how the endowment is organized, downsizing staff while seeking to revitalize mediocre returns. Harvard Management had stood out from other endowments by employing teams making direct investments in areas such as real estate and natural resources as opposed to picking outside fund managers.

The balance of Harvard’s real estate investments is made through external fund managers and these will remain under the university’s direct control. Harvard sold more than $1 billion of such fund stakes this year as it cut holdings in the asset class.

“While we are sad to see Dan and his colleagues depart HMC, we are delighted that we will continue to be partners with them,” N.P. ‘Narv’ Narvekar, Harvard Management’s chief executive officer who joined last year from Columbia University’s endowment, said in the statement.

Harvard will pay management and performance fees to Bain to oversee the real estate assets, the person familiar with the matter said, without specifying the amount.