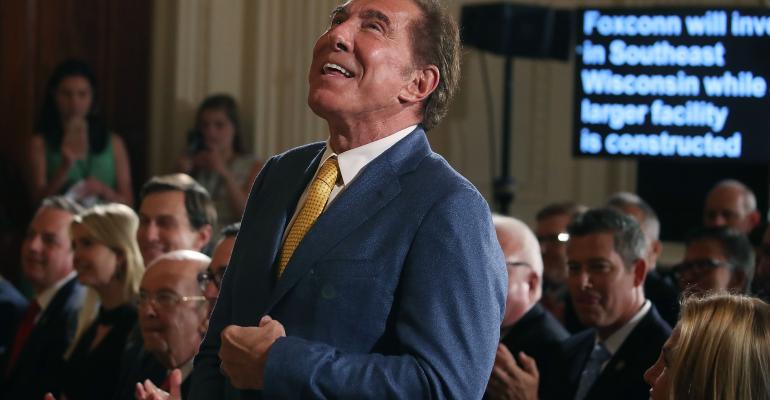 Barrack, the founder of the real estate investment firm Colony NorthStar Inc., is one of the only prominent business or political leaders to support the founder of Wynn Resorts Ltd.

(Bloomberg)—Billionaire Tom Barrack defended his friend Steve Wynn, who has been accused of sexual harassment, saying the casino mogul is a “first-class human being” stuck in an ongoing battle with his ex-wife.

Barrack, the founder of the real estate investment firm Colony NorthStar Inc., is one of the only prominent business or political leaders to support the founder of Wynn Resorts Ltd. since the allegations were published on Jan. 26.

“He is caught in this tsunami of what we’re all dealing with, and part of it has some personal, tangential pieces to his divorce, I’m sure,” Barrack said in an interview Wednesday on Bloomberg TV. “This is a guy who runs one of the best female-oriented operations in the world -- 40 percent of his executive force are women, two of his past presidents are women.”

Shares of Wynn Resorts have lost more than 15 percent of their value since the Wall Street Journal ran a story saying that the company’s founder and chief executive officer pressured employees for sex for years and paid $7.5 million to settle claims by another woman who alleged she was forced to have intercourse. The claims are being investigated by casino regulators in Nevada, Massachusetts and Macau. Wynn said the idea that he assaulted anyone is “preposterous.”

Barrack was an adviser to Donald Trump during his presidential campaign. Wynn, another Trump supporter, served as finance chairman of the Republican National Committee until Jan. 27, when he stepped down following the allegations.

“He had to do the right thing and resign,” Barrack said of Wynn. “I can tell you as being a personal friend, he is a first-class human gentleman and I’ve never seen a taint of any of this.”