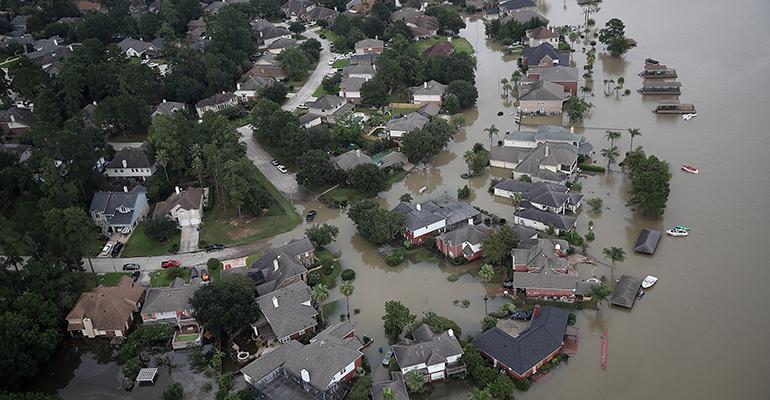 For the next few decades, climate change probably won’t send coastal real estate prices crashing, but it does create a tail risk for buyers.

(Bloomberg Opinion)—A friend of mine who is a bit of a climate-change skeptic once challenged me with this question: If climate change is such a pressing danger, why haven’t coastal real estate prices crashed?

It’s a fair question. If financial markets are even close to efficient, and if everyone knows climate change is about to flood the coasts, then it stands to reason that buyers would be shunning any real estate in the path of rising sea levels. Prices should retreat, at least somewhere.

Now, one quick and easy rebuttal is that housing markets aren’t very efficient (remember 2008?). Since it’s very difficult to short-sell coastal real estate, the price should be set not by the average investor, but by the most optimistic. And all it would take would be a few investors who didn’t believe in climate change -- or at least, who haven’t started thinking seriously about its implications -- to keep prices well above their rational level.

But this explanation, although true in general, doesn’t explain why there haven’t yet been at least a few well-publicized stories about coastal real estate prices crashing in specific areas. By now, the fact of climate change has been well-documented. Charts showing rising temperatures abound:

Similarly, it's widely accepted that rising temperatures are projected to raise sea levels. How much, exactly, is a difficult question. Forecasts have generally predicted a rise of 1.7 to 3.2 feet by 2100, though some recent models say the increase will be significantly larger unless carbon emissions are substantially curbed. Zillow, a real estate website, estimates that a half-million homes in Miami could be underwater by century’s end, and has issued warnings for a large number of locations.

The turn of the century, though, is a long way off. Most markets don’t depend very much on things that are projected to happen many decades in the future -- the Internal Revenue Service counts the useful life of a rental property as only 27.5 years, and the longest-dated U.S. Treasury bonds are only 30 years. Even in the worst-case scenario, sea level rise will be moderate by 2050 -- perhaps 1 or 2 feet along most U.S. east coast locations. And there’s a good chance it will be much less.

A rise of that magnitude doesn’t sound like a lot. But it would inundate a number of low-lying coastal areas. The National Oceanic and Atmospheric Administration’s sea level rise viewer app lets you play around with the data and look at maps. Even a moderately bad climate-change scenario could swamp some pieces of coastal real estate within a few decades.

But sea level rise isn’t a gradual, steady thing. The ocean is not a still bowl of water, but a roiling mass tossed around by winds and tides. Long before coastal areas are permanently underwater, they’ll experience increased risk of catastrophic flooding. Hurricane Harvey, which last year flooded much of the city of Houston and became the second most expensive natural disaster in U.S. history (behind another wind-induced coastal flood, 2005’s Hurricane Katrina), is probably a harbinger of more frequent storm-driven disasters.

So for the next few decades, climate change probably won’t send coastal real estate prices crashing, but it does create a tail risk for buyers. Increased probability of coastal flooding makes waterfront real estate a bit like a junk bond -- something that will probably go up in value, but has a small to moderate chance of going to zero. Junk bonds generally don’t have a value of zero, but the risk of devastation definitely does depress their selling price.

Recent research confirms that the climate threat is already showing up in prices. Economists Asaf Bernstein, Matthew Gustafson and Ryan Lewis have a recent paper showing that houses exposed to sea-level rise of between 0 and 6 feet have been selling at a 7 percent discount relative to houses a similar distance from the beach that aren’t exposed. The time period they look at is 2007-2016 -- before the damage from Harvey. They also confirm that the discount is higher in locations where people report more worry about climate change.

Another recent study, by environmental researchers Jesse Keenan Thomas Hill and Anurag Gumber, shows something similar. Focusing on Miami-Dade County, they show that higher-elevation locations have risen in price faster than similar locations at low elevations. That’s consistent with the theory that wealthy buyers pay a premium to escape flooding risk. High-elevation areas could also have other benefits, of course, such as increased safety from crime -- but with crime down dramatically in Miami, this is a less convincing explanation of the increased elevation premium.

In fact, the price differences these economists find may be understating people’s worries about climate change, because of flood insurance. The U.S. government insures many coastal properties against floods, mostly in Texas and Florida. The National Flood Insurance Program charges below-market premiums to many of the riskiest houses, effectively subsidizing owners of the properties most vulnerable to coastal flooding.

So evidence shows that landlords, homeowners and real estate investors are now taking climate change seriously. Polls still find a big partisan gap in concern about climate change, with 67 percent of Republicans claiming that they worry only a little or not at all. But in financial markets, the reality of the phenomenon is starting to be felt.

To contact the author of this story: Noah Smith at [email protected]