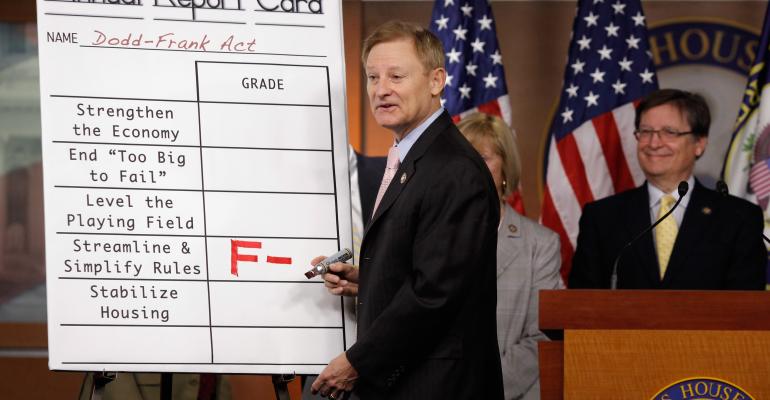 (Bloomberg)—It has taken seven years to put in place the regulatory strictures imposed on Wall Street after the financial crisis. They won’t be removed fast or easily.

President Donald Trump’s Friday directive that set in motion a scaling back of the Dodd-Frank Act was more pageantry than policy, said lawyers and former government officials who worked on the 2010 law. While the expectation for quick action sent bank stocks higher Friday, numerous road-blocks remain before lenders get relief.

Chief among the hurdles is that Trump doesn’t have any of his appointees running the agencies that oversee financial rules. Congress, too, will have to pass new legislation for many Dodd-Frank regulations to be eased. And the president’s decision to put two former Goldman Sachs Group Inc. partners in charge of the effort -- less than a decade after the bank’s traders helped bring the economy to the edge of collapse -- galvanized opposition from Democrats.

Trump’s order is “more of a signal to the marketplace than real action,” said Richard Hunt, who runs the Consumer Bankers Association, a group that represents retail banks. “This is the second inning of a nine-inning regulatory re-balancing.”

Regardless of the timing, Trump’s action demanding that regulators produce a study on financial rules within 120 days starts the process of getting rid of safeguards the Obama administration enacted after the 2008 meltdown. Regulations the new administration plans to target include a ban on proprietary trading, a requirement that risky financial companies be subject to tough Federal Reserve oversight, and rules for taking down failed banks. The Consumer Financial Protection Bureau may also be on the chopping block.

A separate measure Trump signed, which may delay a controversial Labor Department rule requiring brokers who manage retirement accounts to put their customer’s interest first, is likely to have more teeth and move more quickly, lawyers said. That directive was embraced by much of the industry, which has long said the regulation will drive up their costs and make it harder to provide financial advice to their clients.

Trump has promised to get rid of burdensome regulations on business, though few thought he would embrace easing rules on Wall Street as much as he has. On the campaign trail, he billed himself as an economic populist and often took shots at bankers. Trump’s “Argument for America,” a two-minute advertisement that ran days before the election, featured Goldman Chief Executive Officer Lloyd Blankfein in an segment about corporate chieftains pocketing the wealth of American workers.

Now, ex-Goldman executives populate the top echelons of the Trump administration and two of them, National Economic Council Director Gary Cohn and Treasury Secretary nominee Steven Mnuchin, are slated to be the point men on the Dodd-Frank rollback.

On Friday, Trump vented that the law had made it difficult for his business friends to get loans, and boasted to a group of executives gathered at the White House that he was getting feedback on how to fix it from an ideal adviser: JPMorgan Chase & Co. Chief Executive Officer Jamie Dimon.

Democrats seized on the comments.

Trump made his announcement “literally standing alongside big bank and hedge fund CEOs,” said Democratic Senator Elizabeth Warren of Massachusetts. She’s expected to be among those leading the fight to prevent an overhaul of Dodd-Frank in the Senate, where passing a law requires 60 votes to overcome a filibuster. Republicans hold just 52 seats.

For more on bankers’ hopes for Trump reforms click here.

Senator Bernie Sanders of Vermont, the independent who vied for the Democratic presidential nomination in 2016, said on CNN on Sunday that Trump was a “fraud” who’s working for Wall Street: “He appoints all these billionaires. His major financial adviser comes from Goldman Sachs. And now he is going to dismantle legislation that protects consumers,” Sanders said.

Getting Congress to repeal Dodd-Frank, or pieces of it, would be the cleanest way to eliminate its requirements, because Trump can’t wipe laws off the books on his own.

For example, the consumer agency, which has drawn complaints from banks for enforcement overreach, will continue to operate absent new legislation. Even modifying it by replacing its director with a five-member board or requiring its budget to be approved by lawmakers -- reforms suggested by Republicans and the industry -- would take an act of Congress.

But Trump officials argued that many of the regulatory changes they’re seeking could be done at the various agencies that wrote the rules implementing Dodd-Frank.

Trump nominees aren’t yet in control of the main agencies that oversee the financial industry, including the Treasury Department. Mnuchin, who’s awaiting a full Senate vote, is the head of the federal council of regulators, which Trump charged with reviewing Dodd-Frank.

Other agencies that are being staffed by acting chairmen, or are still being run by Barack Obama appointees, include the Securities and Exchange Commission, the Federal Deposit Insurance Corp., the Commodity Futures Trading Commission and the Office of the Comptroller of the Currency. The Federal Reserve, which oversees the biggest banks, has two vacancies on its Board of Governors, including the one responsible for bank rules.

Another issue that could impede changing rules is the byzantine process for approving regulations -- one reason that Dodd-Frank took years to implement. Rules must be written, offered for public comment, often over several months, and deliberated internally before there is a final vote to approve them.

In addition, some of the most onerous and unpopular regulations have been put together by multiple agencies. In the case of the Volcker Rule, which prohibits banks from making market bets with their own capital, it took years of negotiations to get the five regulators involved to agree. To revise Volcker, each agency would need to sign off on changes.

“The time frame for this, it’s going to take a while,” said Michael Barr, who helped write Dodd-Frank while a Treasury Department official in the Obama administration.