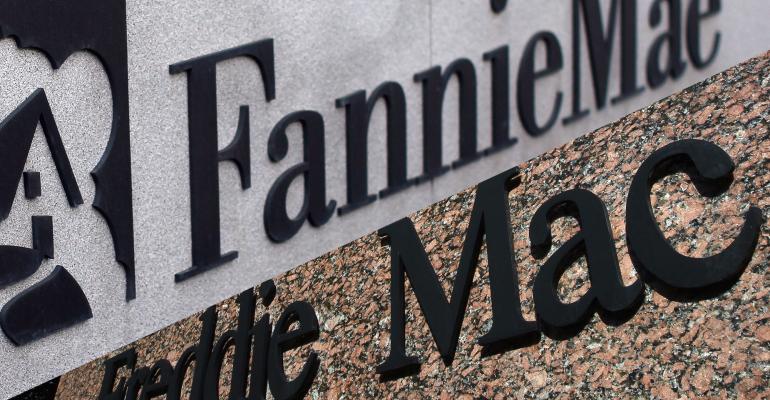 Fannie-Freddie May Be Released Without Congress, Calabria Says

FHFA Director Mark Calabria says the agencies can be privatized even without Congress legislation.

(Bloomberg)—Fannie Mae and Freddie Mac’s new overseer said the mortgage giants can be freed from government control even if Congress doesn’t pass a housing-finance overhaul, while signaling that lawmakers will get “more than sufficient time” to come up with a plan of their own.

The comments by Federal Housing Finance Agency Director Mark Calabria in a Tuesday interview are a clear sign that regulators and President Donald Trump’s administration aren’t counting on a legislative solution after more than a decade of failures to address the biggest piece of unfinished business from the 2008 financial crisis.

Lawmakers will get “at least an entire Congress” to act before the companies are freed, said Calabria, who took over at FHFA last month. That would put the target date beyond the 2020 presidential election.

Calabria’s comments reflect the determination of Trump and his appointed regulators to end the federal conservatorships of Fannie and Freddie, which have been in place since they were seized by regulators and bailed out by taxpayers more than a decade ago. Figuring out what to do with the companies, which dominate the nation’s mortgage market, has been labeled a top priority by officials including Treasury Secretary Steven Mnuchin.

Fannie and Freddie don’t issue mortgages. Instead, they buy loans from lenders and package the debt into bonds that are sold to investors with guarantees of interest and principal. The process makes housing more affordable, while keeping the mortgage market humming.

If released without Congressional action, Fannie and Freddie would lack an explicit federal guarantee for the trillions of dollars of mortgage securities they issue, as such a backstop requires lawmakers revamping their charters.

Right now, investors consider Fannie and Freddie securities to be as safe as Treasuries, partly because as long as the companies remain in conservatorship, most bondholders assume the government would make good on any losses.

“I think with a combination of more offset, more off-laying of the credit risk, more capital, we could get to a point where the creditors should feel pretty comfortable that there’s a lot of people in line ahead of them,” he said.

While there is much that Calabria can pursue on his own, some items, like a government guarantee of Fannie and Freddie bonds and the chartering of new guarantors, must be done by lawmakers. Calabria, for his part, said he would like Congress to allow him to charter new competition for the two companies.

In March, the Trump administration released an outline for housing-finance reform that directed both Treasury and the Department of Housing and Urban Development to draw up reform plans. Treasury and HUD are expected to complete their reports in the next few months, and Calabria said he will negotiate with Treasury about the terms of reform after that happens.

His plan to get Fannie and Freddie out of conservatorship won’t be time-dependent, but will require a post-conservatorship supervision team to be in place and for the companies to hit certain capital goals.

“It’s insolvency, lack of capital that triggered the conservatorship,” he said. “It’s going to have to be solvency, sufficient capital that primarily triggers the exit.”

To be released, Fannie and Freddie would need to boost their capital levels, which currently stand far below what they would need to survive another housing crisis.

Since 2012, all of their profits have been sent to Treasury in a so-called net worth sweep that Calabria has said he has no immediate plans to end. He said he’s open to building capital quickly through initial public offerings for the companies, but isn’t certain that could generate all the capital they’d need.

“Even if it was the largest IPO in history it’s not clear that that could do that in one fell sweep,” he said. Eventually, capital ratios at Fannie-Freddie would need to “look like any other large financial institution,” he said.

Even given sufficient time, housing-finance legislation may not have enough support to pass a divided Congress. Multiple efforts to reform the system have failed in the years since the crisis, leaving the uncertain status of the mortgage giants the largest piece of unfinished business from that era.

Many of the moderate lawmakers who helped push housing reform in previous Congresses have left office, further dimming prospects for success. Senate Banking Committee Chairman Mike Crapo said last week that components of housing reform may need to be done through executive or regulatory action.

“I think you’re going to see some good progress this year. It may or may not be entirely legislative,” Crapo said at an at Independent Community Bankers of America event.

On top of reforming housing finance, Calabria also must deal with lawsuits from Fannie and Freddie shareholders, including hedge-fund managers who stand to reap a windfall if the firms are released. He brushed off concerns about the legality of Treasury’s net-worth sweep, which is the focus of legal challenges.

“I think that if we can get them out of conservatorship and then we can set a path, I think a lot of those issues will go away,” he said.