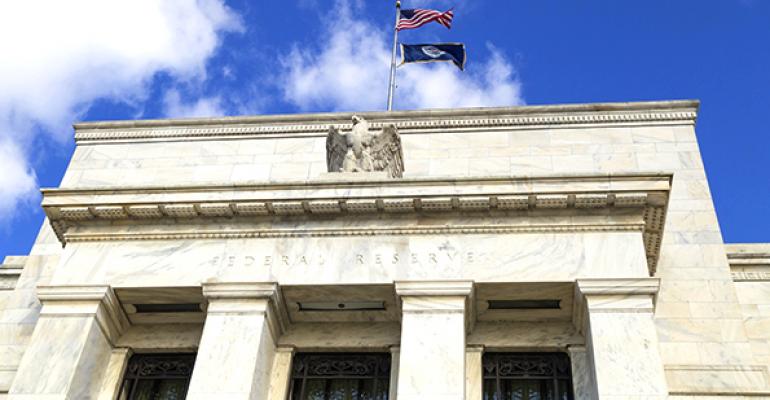 The Federal Open Market Committee indicated that even though it’s stepping up the pace of interest-rate hikes, economic growth should continue apace.

(Bloomberg)—Federal Reserve officials raised interest rates for the second time this year and upgraded their forecast to four total increases in 2018, as unemployment falls and inflation overshoots their target faster than previously projected.

The so-called “dot plot” released Wednesday showed eight Fed policy makers expected four or more quarter-point rate increases for the full year, compared with seven officials during the previous forecast round in March. The number viewing three or fewer hikes as appropriate fell to seven from eight. The median estimate implied three increases in 2019 to put the rate above the level where officials see policy neither stimulating nor restraining the economy.

The Federal Open Market Committee indicated that even though it’s stepping up the pace of interest-rate hikes, economic growth should continue apace. “The committee expects that further gradual increases in the target range for the federal funds rate will be consistent with sustained expansion of economic activity, strong labor market conditions, and inflation near the committee’s symmetric 2 percent objective over the medium term,” according to its statement following a meeting in Washington.

The statement omitted previous language saying that the main rate would remain “for some time” below longer-run levels. Other changes included referring to “further gradual increases” instead of “adjustments.” Officials also said that “indicators of longer-term inflation expectations are little changed.” Previously, the statement made separate references to survey-based and market-based measures of such expectations.

The S&P 500 Index of U.S. stocks fell after the Fed decision, while benchmark 10-year yields were up to 2.98 percent from Tuesday’s 2.96 percent. The Bloomberg dollar spot index, which tracks the performance of a basket of 10 global currencies against the greenback, climbed 0.1 percent on the day.

While the course of interest-rate hikes remains gradual, the slightly more aggressive pace shows officials see more urgency to tighten policy, as unemployment already fell in May to the level they had forecast for year-end. U.S. growth is also getting a boost from $1.5 trillion in tax cuts and a $300 billion increase in federal spending, with inflation at the central bank’s 2 percent target for two months.

“Economic activity has been rising at a solid rate,” the FOMC said in its statement. “Recent data suggest that growth of household spending has picked up, while business fixed investment has continued to grow strongly.”

Wednesday’s decision -- the sixth quarter-point increase in 18 months, raising the benchmark federal funds target rate to a range of 1.75 percent to 2 percent -- was a unanimous 8-0.

Chairman Jerome Powell is scheduled to hold a press conference at 2:30 p.m., his second since taking the helm from Janet Yellen in February. Powell has repeatedly played down the dot plot as a guide to future interest rates, though investors continue to focus on it.

Updating their quarterly forecasts, officials projected the policy rate at 3.1 percent at the end of 2019, according to their median estimate -- compared with 2.9 percent seen in March -- and 3.4 percent in 2020, unchanged from the prior forecast.

Officials lowered their jobless-rate estimates after unemployment fell to 3.8 percent as of May, matching April 2000 as the lowest reading since 1969. U.S. payrolls expanded by more than 1 million workers in the first five months of 2018, reaching the milestone faster than in the previous two years.

On inflation, policy makers forecast a slight overshoot of their target starting in 2018 at 2.1 percent, and running through 2019 and 2020, compared with a 2020 overshoot in March’s projections. The Fed’s preferred price gauge -- the Commerce Department’s personal consumption expenditures index -- rose 2 percent from a year earlier in March and April, after spending most of the past six years below it.

The core PCE index, which excludes food and energy and is seen by officials as a better gauge of underlying price pressures, is forecast to reach 2 percent this year and 2.1 percent in 2019 and 2020. The index rose 1.8 percent in April from a year earlier.

U.S. central bankers again emphasized on Wednesday that the goal is “symmetric,” and they said in minutes of the May meeting that “a temporary period of inflation modestly above 2 percent” would help anchor long-run inflation expectations around the target.

The median estimate for economic growth this year rose to 2.8 percent from 2.7 percent in March, with projections unchanged for 2.4 percent in 2019 and 2 percent in 2020. The committee’s forecast for the long-run sustainable growth rate of the economy held at 1.8 percent, suggesting policy makers are skeptical of the effect of tax cuts on the economy’s capacity for growth.

Fed raised interest on excess reserves rate -- known as IOER -- by 20 basis points to 1.95 percent, effective Thursday Action “is intended to foster trading in the federal funds market at rates well within the FOMC’s target range,” Fed said May minutes had flagged possibility of such a move as a “small technical adjustment” in implementing monetary policy