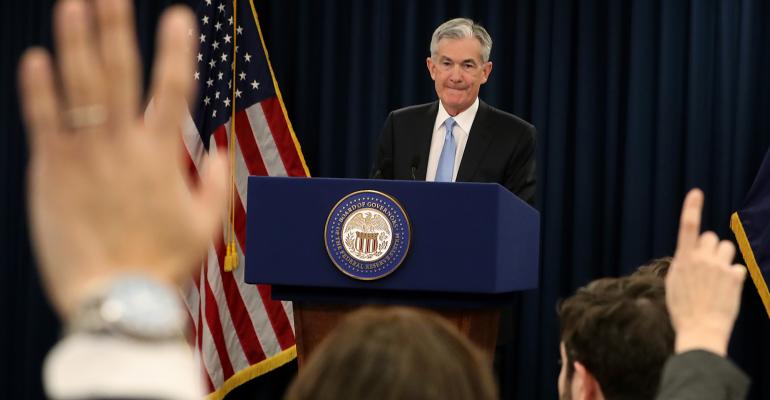 The Federal Reserve plans no interest rate hikes this year.

(Bloomberg)—Federal Reserve officials scaled back their projected interest-rate increases this year to zero and said they would end the drawdown of central bank bond holdings in September, sending benchmark Treasury yields to the lowest level in more than a year and bolstering market bets on a rate cut in 2019.

The median rate projection of Fed officials compared with two hikes in the December forecasts, which spooked investors at the time. In its statement following a two-day meeting in Washington, the Federal Open Market Committee repeated January language that it will be “patient” amid “global economic and financial developments and muted inflation pressures.”

“Patient means that we see no need to rush to judgment,” Fed Chairman Jerome Powell said in a press conference after Wednesday’s decision. “It may be some time before the outlook for jobs and inflation calls clearly for a change in policy.”

The Fed’s signal that it will keep interest rates on hold for the full year reflects concerns that economic growth is slowing, lower energy prices are weighing on inflation and risks from abroad are dimming the outlook. The projections go further than the one-hike forecast analysts had expected in a Bloomberg survey.

“This was definitely a dovish outcome and even a bit of a surprise,” said Ben Emons, managing director of global macro strategy at Medley Global Advisors in New York.

Reaction in markets confirmed the dovish interpretation. Stocks reversed losses, the dollar turned lower and Treasuries rallied, with the 10-year Treasury yield dropping to the lowest in more than a year. Traders lifted the odds of the Fed cutting rates to around 48 percent.

In a separate statement Wednesday, the Fed said it would start slowing the shrinking of its balance sheet in May -- dropping the cap on monthly redemptions of Treasury securities from the current $30 billion to $15 billion -- and halt the drawdown altogether at the end of September. After that, the Fed will likely hold the size of the portfolio “roughly constant for a time,” which will allow reserve balances to gradually decline.

Beginning in October, the Fed will roll its maturing holdings of mortgage-backed securities into Treasuries, using a cap of $20 billion per month. The initial investment in new Treasury maturities will “roughly match the maturity composition of Treasury securities outstanding,” the Fed said. The central bank is still deliberating the longer-run composition of its portfolio and said “limited sales of agency MBS might be warranted in the longer run.”

The 10-0 decision held the target range of the federal funds rate steady at 2.25 percent to 2.5 percent.

While the central bank is very close to its twin goals of low and stable inflation and full employment, Powell and his colleagues must contend with risks from abroad, including slowing growth in Europe and China and possible spillovers from Britain’s exit from the European Union.

Stocks have rebounded since the Fed made a dovish pivot in January, replacing a reference to further gradual rate increases with a pledge for patience. Wednesday marked policy makers’ first opportunity since December to lay out in quarterly forecasts the extent to which their projections for hikes have changed.

Economic growth “has slowed from its solid rate in the fourth quarter,” the FOMC said in its statement. “Job gains have been solid, on average, in recent months” despite “little changed” payrolls in February. “Overall inflation has declined,” though excluding food and energy it “remains near 2 percent,” the central bank said.

Policy makers also lowered economic-growth projections for this year and next, giving a 2.1 percent median estimate for 2019, a full percentage point below last year’s pace.

The less upbeat assessment in the statement compared with January’s language saying growth was solid, consumer spending was strong and business investment had moderated.

The projections showed 11 of 17 officials saw no hikes this year, while four expected one rate increase and two people projected two hikes. Policy makers expect to lift rates once in 2020, to 2.6 percent by the end of that year, and hold them steady in 2021.

That compares with a December projection for a 3.1 percent rate in 2020 and 2021, with borrowing costs converging to 2.75 percent in the longer run, according to the median path. That long-run estimate was unchanged in Wednesday’s forecasts.

The Fed formally adopted its 2 percent inflation goal in 2012, and price gains have mostly come in on the low side since then.

Policy makers slightly lowered their expectations for inflation relative to their last set of economic projections. After 1.8 percent headline inflation in 2019, they see price gains of 2 percent on both the main and core indexes for the next two years, eliminating the overshoot they had previously projected.

Officials see unemployment at 3.7 percent by year-end, higher than their previous estimate of 3.5 percent. At the same time, they lowered their long-run jobless rate projection to 4.3 percent, suggesting the labor market is running less hot than they previously thought.