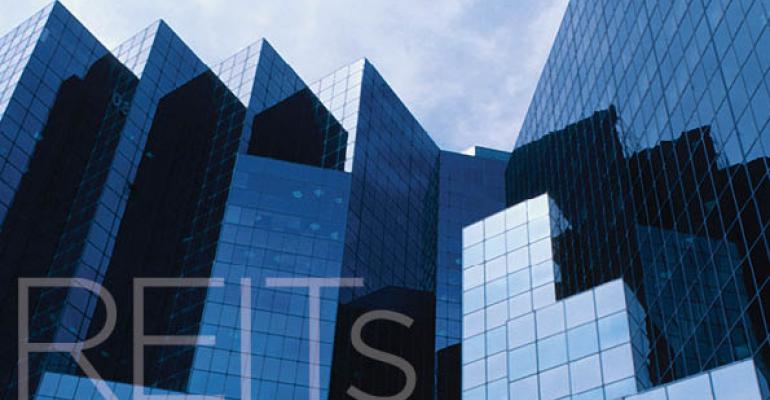 U.S. REITs have had a tough run on Wall Street in the past year. Year-to-date returns for the sector are at a scant 0.15 percent through early October, according to the National Association of Real Estate Investment Trusts (NAREIT). Piling on top of that, Fitch Ratings recently released research showing that while REIT credit profiles remain strong, they have marginally deteriorated during the last six months. Although the weak performance and weakening credit indicate some hiccups in the sector, REIT analysts are by no means sounding alarm bells.

“We don’t view this as a tectonic shift in REIT credit profiles, but instead can be characterized as emerging issues,” says Steven Marks, managing director and head of U.S. REITs at Fitch Ratings.

Specifically, the weaker credit is due to issues primarily related to liquidity, leverage and cost of capital. REITs have seen an increase in development pipelines, which has created a slight uptick in development exposure in regards to the cost to complete new construction projects. The cost to complete development as of June 30th was 2.5 percent of gross undepreciated assets. That is a slight increase over the 2.0 percent last year. However, the 2.5 percent at the end of June is still down from the peak of the last cycle, which was about 3.6 percent, according to Fitch. “So the ratio is up, but it is not anywhere near approaching the max exposures that we saw during the last credit cycle,” says Marks. 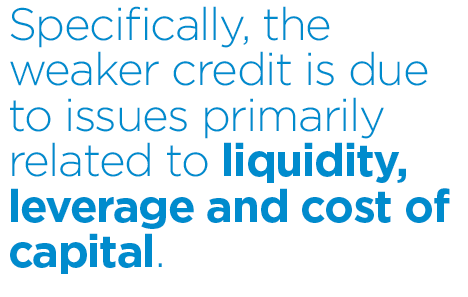 A second metric on the watch list is REITs’ use of their lines of credit—the main source of liquidity for REITs. REITs can’t retain much in the way of capital due to their requirements to pay dividends to shareholders. As an industry, the average percent that REITs had drawn on those lines of credit as of June 30th was 22 percent compared to 14 percent at the end of 2013, according to Fitch. That 22 percent is also comparable to the 20 to 25 percent that REITs had drawn around the peak of the crisis in 2009, adds Marks.

The higher draws on lines of credit are likely due to the fact that equity markets are essentially closed to a big number of REITs given that they are trading at discounts to their net asset values (NAV). “So companies that need to fund development or redevelopment or other growth opportunities have been doing so by accessing their lines of credit as an immediate source of capital,” says Marks.

REIT balance sheets are in a better place than they were at the previous peak in 2007. But that doesn’t mean they are in a great place, adds Cedrik Lachance, managing director at research firm Green Street Advisors. What REITs have done a better job of in this cycle is in “laddering” their debt maturities. “So instead of having sizable near-term bullets to deal with on refinance, on average, REITs tend to have much smoother debt maturity schedules,” he says.

That said, leverage and debt to EBIDTA ratios remain at levels that show that companies have not necessarily learned great lessons from the previous downturn, says Lachance. And the growing development pipelines create a bigger unfunded capital commitment, which proved to be problematic in the last downturn. 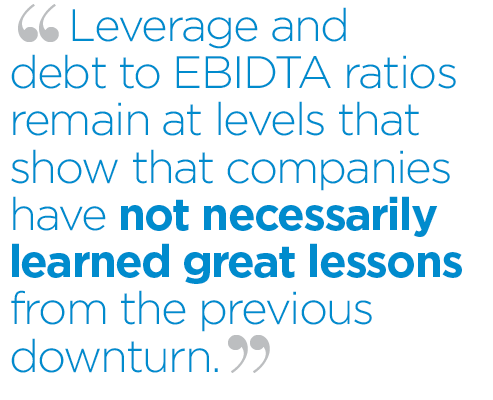 “As people look into the REITs’ future, there is a question mark on how some of these development pipelines will be financed,” says Lachance.

REITs still have tremendous access to capital. However, they have lost some advantages in terms of their cost of debt. Spreads have widened in the unsecured debt market, making it more expensive to issue bonds to raise money. The cost of equity is also more expensive, because REITs are trading at a discount to NAV, on average, by about 10 percent.

“That sends a signal to the REITs to be more cautious in allocating capital to acquisitions or development,” says Lachance. For many REITs, that message has been received. A number of REITs have curtailed acquisition plans or are “recycling” capital in order to finance new activities, meaning selling off assets to acquire or build new assets, he adds.

Despite those emerging credit issues, the underlying real estate fundamentals for most REITs continue to look favorable. One sector that is on the watch list is the healthcare space as leverage is trending higher among the big three REITs—Ventas, Welltower Inc. (formerly Health Care REIT) and HCP, says Marks.

Those three REITs, on average, had leverage of 4.5 to 5.5 times, with leverage now approaching 6 times as measured on a debt/EBITDA basis.  Those REITs have been more reluctant to issue equity to fund transactions due to shrinking premiums to NAV. So they have been funding the majority of their growth with debt, he adds.

Overall, weaker credit in the broader REIT sector is not a dire situation. One aspect to watch going forward will be REIT stock buybacks.

“If we see companies begin to buy back meaningful amounts of stock, that would be more of a red flag for us, particularly if they increase leverage to do so,” says Marks. Given REITs’ inability to retain meaningful amounts of capital, they have limited options to fund buybacks. Companies can use cash from dispositions or draw on their lines of credit, the latter of which would result in a weakening credit profile, he adds.