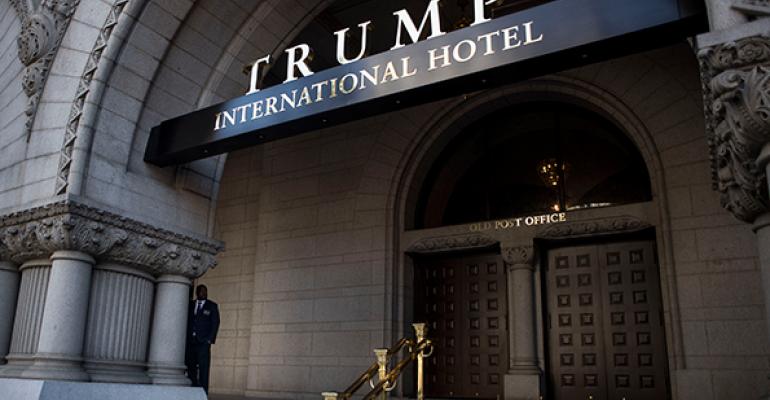 GSA officials knew Trump’s ultimate ownership of the hotel -- which sits on federal property -- potentially violated a provision of the lease with the government, the GSA inspector general concluded in a report. It also may have violated two clauses in the Constitution prohibiting “emoluments” to the president from foreign governments and also from federal or state government agencies. Emoluments are payments or presents.

The watchdog doesn’t recommend canceling Trump’s lease. The agency doesn’t appear poised to do so, either. In its response to the inspector general, the GSA points to Justice Department filings in pending litigation against Trump over his alleged violation of the emoluments clauses that argue the lease does not violate the Constitution.

Agency officials “improperly ignored” the issues, a violation of their obligation "to uphold and enforce the Constitution," the inspector general said in a report. The ground lease for the building also prohibits any federal elected official from sharing in the lease or gaining “any benefit that may arise therefrom,” according to the report.

In late 2016, senior agency attorneys agreed that Trump’s ownership of the hotel as president may have violated the Constitution, but they decided to “punt,” one of them told the inspector general, according to the report.

The Trump International Hotel in Washington has become one of the president’s most successful property projects, generating revenues from foreign governments that rent space for events and favor-seekers eager to be seen in the president’s hotel on Pennsylvania Avenue, just blocks from the White House.

Trump owns the hotel through his trust, which holds all of his business interests, and ultimately profits from it. The hotel has become a magnet for high-powered Republicans in Washington, from lobbyists to lawmakers, who rent rooms and spend money at the hotel’s restaurants.

For the same reasons, the hotel has attracted controversy, especially from Democrats and good-government groups, who argue that Trump is profiting from the presidency. They say that makes him susceptible to corrupt interests who would court favor by enriching the president’s family business, the Trump Organization. The attorneys general of Maryland and Washington have sued Trump alleging he’s violating the Constitution.

"The Trump Hotel is a glaring physical symbol of the Trump Administration’s refusal to play by the same rules as everyone else," said Representative Elijah Cummings, a Maryland Democrat and chairman of the House Oversight Committee. Another Democratic member of the committee, Gerry Connolly of Virginia, urged his colleagues to investigate Trump’s hotel.

The GSA’s in-house auditor recommended that the agency conduct a formal legal review of the Constitution’s emoluments clauses and revise the contract governing the lease. The agency agreed with the recommendation.

Representative Mike Quigley, an Illinois Democrat and the chairman of congressional panel that oversees GSA, said he plans to “demand an explanation for GSA’s irresponsible behavior.”

The Citizens for Responsibility and Ethics in Washington, which is also involved in legal action over the hotel’s lease, said in a statement that “the Inspector General’s report vindicates our conclusions, agreeing with our definition of emoluments.”