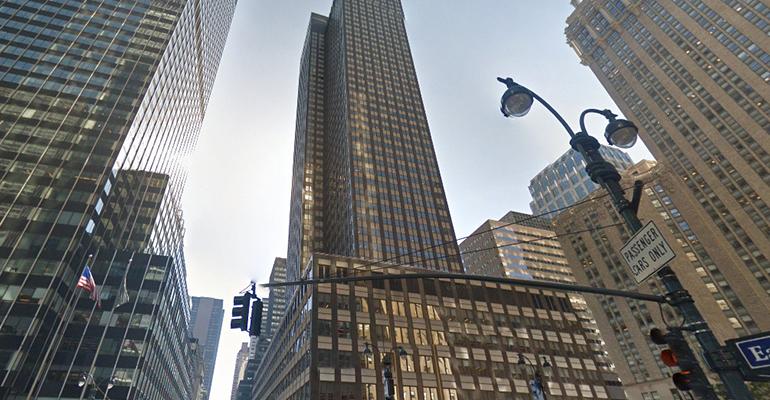 Among the properties on the block is 245 Park Ave., according to a marketing document seen by Bloomberg.

(Bloomberg)—HNA Group Co. is marketing commercial properties in New York, Chicago, San Francisco and Minneapolis valued at a total of $4 billion as the indebted Chinese conglomerate seeks to stave off a liquidity crunch.

Among the properties on the block is 245 Park Ave., according to a marketing document seen by Bloomberg. HNA bought that skyscraper less than a year ago for $2.21 billion, one of the highest prices ever paid for a New York office building. The company also is looking to sell 850 Third Ave. in Manhattan and 123 Mission St. in San Francisco, according to the document. The properties are being marketed by an affiliate of brokerage HFF.

HNA’s massive debt load is driving the company to sell assets around the world. The once little-known airline operator become a symbol for China’s huge appetite for overseas properties, spending tens of billions of dollars to buy trophy buildings and stakes in Hilton Worldwide Holdings Inc. and Deutsche Bank AG. Now HNA is shifting gears as China clamps down on what it refers to as “irrational” investments.

Chief Executive Officer Adam Tan said in November that HNA was looking to sell assets to conform with Chinese government policies. Last month, it agreed to sell a Sydney office building to Blackstone Group LP for A$205 million ($165 million), Bloomberg reported. In Hong Kong, the company is inviting outside investors to buy into two land plots it purchased for $1.8 billion just over a year ago.

The U.S. marketing document lists six office properties that are 94.1 percent leased, and one New York hotel -- the 165-room Cassa -- with a total value of $4 billion.

The purchase of the 1.7 million-square-foot (158,000-square-meters) tower at 245 Park, with tenants including JPMorgan Chase & Co., was viewed as a high-water mark for a real estate boom that saw prices for marquee office buildings in big cities double over a seven-year span. A wave of overseas buyers helped propel prices higher in Manhattan. As those foreign investors have pulled back, the market has slowed.

HNA owns more than $14 billion in real estate properties globally, according to estimates by Real Capital Analytics Inc. The conglomerate had amassed $190 billion of assets as of June. It had 185.2 billion yuan ($29.3 billion) of short-term debt as of the end of June -- more than its cash and earnings can cover.