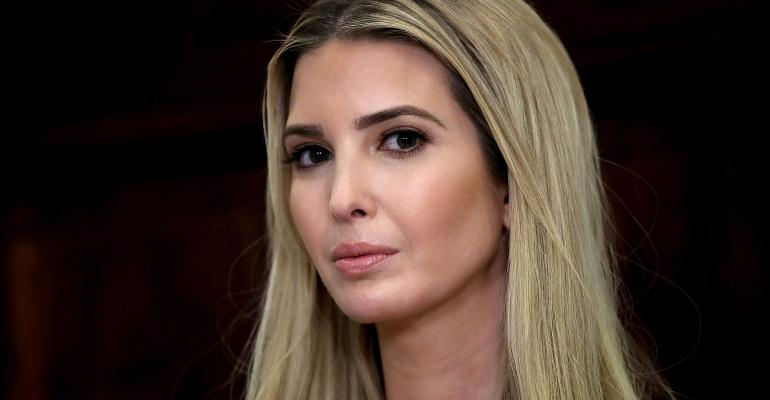 Together, Ivanka Trump and her husband Jared Kushner earned at least $82 million in outside income while working as unpaid senior advisers to her father.

(Bloomberg)—Ivanka Trump made $3.9 million from her investment in her father’s hotel in Washington last year, according to a disclosure released by the White House on Tuesday.

She was also paid $2 million in severance by her family’s real estate company, the Trump Organization. Together, Ivanka Trump and her husband Jared Kushner earned at least $82 million in outside income while working as unpaid senior advisers to her father, President Donald Trump.

Kushner reported at least $27 million and as much as $135 million in outstanding liabilities. Federal rules require top officials to report income, assets and liabilities in broad ranges. He reported more than $5 million in capital gains from the sale of a shopping mall in the Bronx.

The financial disclosure forms showed that trusts benefiting Kushner, Trump or their children made eight purchases of at least $9.8 million in real estate, including properties in New Jersey and New York City. The transactions occurred between March and September 2017.

Kushner reported divesting more than 125 assets, and listed several others as being in process of divestment. He also said in his filing that he would continue to recuse himself from matters involving broker-dealer, real estate and online financial services related to his holdings in Quadro Partners, which owns Cadre.com, an online platform for investing in real estate.

The Trumps and Kushner retained their ownership in their private businesses upon entering the White House, a decision that critics say has left them open to conflicts of interest and influence by foreign countries.

The White House released financial disclosure forms for other officials, including National Security Adviser John Bolton, who reported $2.2 million in income in the year and three months before he joined the administration.

The biggest chunk of that was the $569,423 he made as a commentator on Fox News. The American Enterprise Institute, a think tank, paid Bolton $240,000 in salary, and Deutsche Bank paid him $72,000 for a speech. That did not include the amount paid to the agent who had arranged for Bolton’s appearance.

Bolton also made $115,000 for a pair of appearances at the Yalta European Strategy, or YES, conference, sponsored by the Victor Pinchuk Foundation, in September 2017 and February 2018. Pinchuk is a Ukrainian oligarch and Special Counsel Robert Mueller is examining a $150,000 payment that his foundation made to Donald Trump’s foundation for Trump to appear via video at a conference in September 2015, according to a report in the New York Times.

Bolton was of counsel in the Washington office of the law firm Kirkland & Ellis LLP, but he did not list any income from the firm.

Bolton also reported at least $11.2 million in assets, most of which were held in what ethics rules call exempted investment funds that don’t have to be divested because they invest in a wide variety of securities.