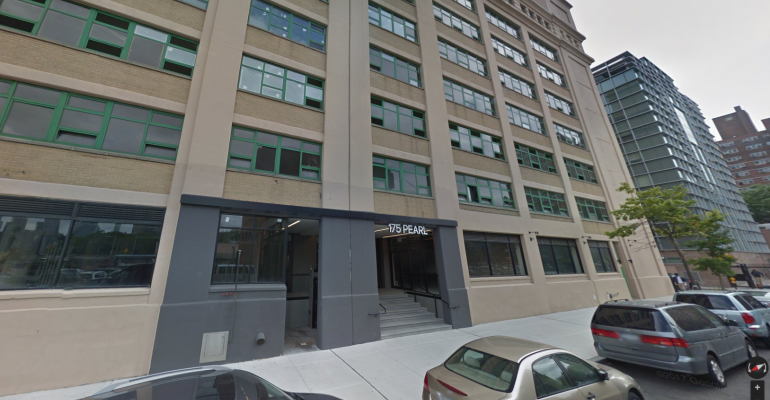 Documents filed in Tokyo show that the buyer was operating on behalf of a subsidiary of Nippon Telegraph & Telephone Corp. , of which the Japanese government owns at least a third.

(Bloomberg)—Two months after Jared Kushner joined the White House as a senior adviser, his family firm sold a stake in a Brooklyn building to a unit of a company whose largest shareholder is the government of Japan.

The buyer of record in the $103-million deal for 175 Pearl St. was Normandy Real Estate Partners, a New Jersey-based investment firm. But documents filed in Tokyo show that it was operating on behalf of a subsidiary of Nippon Telegraph & Telephone Corp. By law, the Japanese government owns at least a third of NTT, in effect a controlling share.

Questions have been raised repeatedly whether Kushner, whose family business has been in search of overseas investors, might pursue a personal agenda while helping run U.S. policy. This is the first known deal with a government-affiliated firm since he entered the White House.

There’s no evidence the NTT company made the investment with a political intent -- it denies that, as do all the others involved -- or that there has been any political gain. However, this is the kind of deal that conflict-of-interest rules seek to limit: not only inappropriate entanglements and their appearance but situations where potential favors might one day be paid back. Officials like Kushner are expected under U.S. law to recuse themselves from government decisions that would have a “direct and predictable effect” on their financial interests.

At the time of the March 31, 2017, deal, Kushner was helping his father-in-law, President Donald Trump, oversee trade policy. Since then, his security clearance has been curtailed and his portfolio narrowed. The Washington Post recently cited U.S. intelligence reports that officials in at least four countries have discussed ways to manipulate Kushner because of his family business. Japan was not among them. A spokesman for Kushner’s lawyer called the Post article inaccurate. Special Counsel Robert Mueller has been looking into whether Kushner brought his family’s search for foreign investors into policy deliberations.

The Brooklyn transaction represented a premium of more than 60 percent on a price-per-square-foot basis over what Kushner Cos. and its partners paid four years earlier, according to data compiled by Bloomberg. The deal enabled the Kushner group to take larger ownership stakes in nearby buildings in Brooklyn’s chic Dumbo neighborhood that have signed tenants such as Etsy Inc. and WeWork Cos.

Kushner Cos. is now a co-owner with the NTT unit. The Japanese firm owns 23 percent of the building through limited liability companies plus more through a Normandy-controlled investment fund, a person familiar with the arrangement said. A day after the companies bought 175 Pearl St., the NTT company purchased a stake in Normandy itself. Kushner Cos. maintains a non-controlling share of less than five percent.

Meanwhile, the property, connected to one of the Kushner-owned buildings by a pedestrian walkway, remains vacant. A person familiar with the building said talks with potential tenants are underway and final improvements are being made. A spokesman for the subsidiary, NTT Urban Development, said the company knew the deal involved Kushner Cos. The subsidiary describes itself as the real estate arm of NTT. It primarily operates in Japan and had only seven U.S. properties as of September 2016. Its purchase of 175 Pearl was the only one it made in New York City last year, the Tokyo documents, filed in February, show.

Normandy had previously done separate deals with both Kushner Cos. and NTT Urban Development. But it wasn’t until February 2017 that it approached NTT to do the deal with Kushner, the NTT unit’s spokesman said.

All involved deny any political component to the deal or involvement by Jared Kushner. A spokesman for Abbe Lowell, Kushner’s lawyer, said Kushner has had no role in the company since joining the White House 14 months ago and followed ethics advice on recusals and separating from his business. A Kushner Cos. spokeswoman said it only engaged with Normandy and wasn’t aware of a relationship with NTT. Kushner Cos. and Normandy said Jared Kushner played no part in the deal.

The NTT Urban Development spokesman said Normandy negotiated on its behalf, and the amount invested in the property was smaller than NTT’s other U.S. properties. A spokesman for the prime minister’s office in Japan said, “We are not aware of such a transaction.”

Yoshinori Ogawa, a senior strategist at Okasan Securities in Tokyo, said he doubts that the government influences NTT investments and added that subsidiaries of NTT make their own business policy.

Kushner divested some of his assets to family members to avoid conflicts with his White House role. He held onto others. His disclosure documents don’t note that his share of the company that sold 175 Pearl was divested as the filings do with many others.

Trump’s victory was a source of acute concern in Japan. He ran a protectionist,  Japan-bashing campaign, vowed to drop a Pacific trade deal, accused Tokyo of manipulating its currency, threatened to remove U.S. troops from the country and even suggested Japan might have to develop its own nuclear weapons. When Trump won, Prime Minister Shinzo Abe skipped a planned Peru visit and flew to New York to be the first head of state to personally congratulate the president-elect in a Trump Tower meeting that included Ivanka Trump and Jared Kushner, who was still running Kushner Cos. at the time.

Trump warmed to Abe and, after taking office, White House officials asked Finance Minister Taro Aso to join Abe on his next visit for trade talks with Vice President Mike Pence. The Japanese leaders extended their push in a February 2017 trip to the White House, where Aso and Pence talked about economic cooperation. Afterward, Abe joined Kushner and other members of the Trump family aboard Air Force One for a flight to Mar-a-Lago, the Florida resort owned by the president.

NTT Urban Development and Normandy bought the Brooklyn property six weeks later from the Kushner group, which included Invesco Ltd. Atlanta-based Invesco had a majority stake in the property, which was operated by Kushner and Aby Rosen’s RFR Holding LLC.

Japan’s charm offensive hasn’t yielded much thus far. After Trump backed out of the Trans-Pacific Partnership, trade talks came to an impasse until he announced steel and aluminum tariffs last week, a move that sunk shares of Japanese companies.