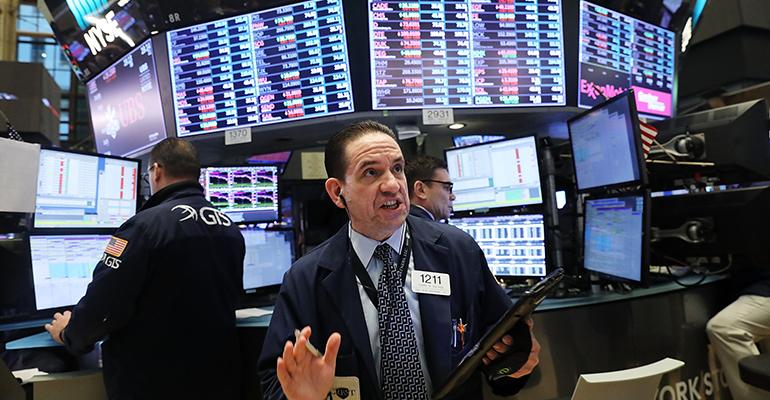 The selling is a reminder of how potent financial conditions can be to economic growth.

(Bloomberg)—Federal Reserve Chairman Jerome Powell was met with a surging bout of market volatility in his first day in office, as stocks fell and long-term interest rates plunged in response.

The 4.1 percent rout in the S&P 500 index on Monday, the steepest decline since 2011, poses more questions than answers so far for Powell and his team. The sell-off continued into Tuesday in Asia, with stocks plunging for a second day and U.S. stock futures continuing to decline.

“The Dow down 1,000 points -- that gets your attention,” said Roberto Perli, a former Fed economist and partner at Washington-based consultancy Cornerstone Macro LLC. “What they want to know is, is there some fundamental reason why the stock market is reacting like that?” he added. “Is there something wrong with the economy, or is it the undoing of some excesses of the past?”

The selling is a reminder of how potent financial conditions can be to economic growth. Since the global financial crisis, U.S. policy makers have focused on strengthening major banks with more capital and liquidity requirements so they could withstand periods of volatility like this one and continue lending.

Busting bubbles is not something they aim for, yet if recent moves are little more than correcting valuations back to reasonable levels that would most likely be welcomed. Powell’s predecessor Janet Yellen said in a weekend interview with CBS that equity prices were "high."

“The Fed may be mightily relieved to see markets cool off, provided that this does not run too far,” Krishna Guha, the vice-chairman of Evercore ISI and a former New York Fed official, said in a report to clients. “We continue to expect a rate hike in March.”

Still, the decline comes on the back of an incremental but important shift in the outlook for interest rates. A 2.9 percent jump in the year-over-year growth rate in average hourly earnings for January caused investors to reconsider whether the Fed would maintain a pace of three rate hikes this year.

The Federal Open Market Committee itself signaled at its Jan. 30-31 meeting that it expected the economy to warrant “further” gradual increases, which economists interpreted as shutting the door on just two hikes for 2018, while leaving it open for three or four. If the Fed welcomes tighter financial conditions, that could impact consumer confidence as households feel less wealthy, said Michael McDonough, chief economist with Bloomberg Economics.

“It is important to see what happens in the next couple of days,” said McDonough. “Everybody would agree that some sort of correction was in the cards. What is the cause of this and does it continue? That will be the big factor on whether it disrupts the economic cycle.”

The stock plunge is occurring during an upswing in the economy with the unemployment rate at 4.1 percent. If stocks simply rise gradually from here or fall a bit further, it probably won’t mean much for policy makers.

Fed officials are probably asking, “who is going to bear the losses, what are the consequences for the financial sector, and was the run-up in the stock market” leveraged, said Nellie Liang, formerly the chief adviser on financial stability to former Fed chairs Ben Bernanke and Janet Yellen. She is now a senior fellow at the Brookings Institution in Washington.

The resilience of institutions is far more critical for financial stability than a couple of days of volatility, she said. Liang was part of a systemwide effort to assure that the largest banks in the U.S. could withstand big shocks and continue to lend.

In the 2018 “severely adverse” stress test scenario for the largest banks, for example, stocks fall 28 percent for the year ending the first quarter of 2019. Unemployment jumps to 10 percent, and there is a sharp fall in corporate bond and real estate prices. The harsh scenario is aimed at making sure the biggest banks have sufficient capital to absorb such losses and continue lending.

So far, the shock officials want banks to test for is a lot larger than what financial markets have delivered in 2018. For Powell, today’s move is a reminder to watch closely for any broad economic fallout but not panic.

“Our financial system is now far stronger and more resilient than it was before the financial crisis that began about a decade ago,” he said earlier Monday in the opening minutes of his tenure. “We intend to keep it that way.”