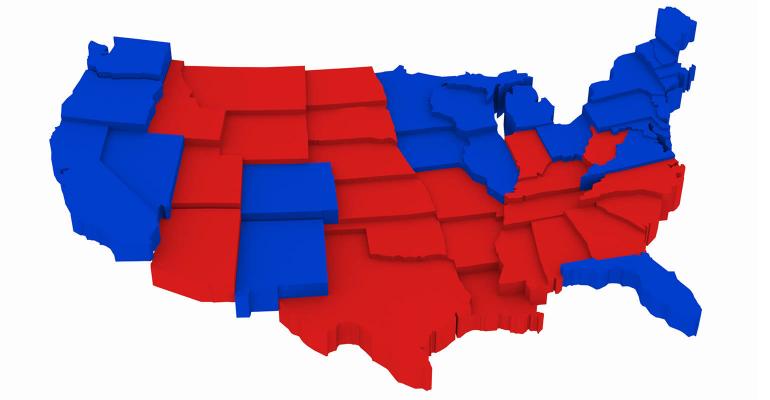 GOP leaders say they want to complete the bill in 2017 to prevent election-year politics from getting in the way.

(Bloomberg)—Republican lawmakers in red and blue states are expressing unease over the limited details about middle-class relief in the tax framework their leaders released last month, which has raised difficult questions about how to prevent some middle-income Americans from paying more due to fewer tax breaks.

As one example, the lack of specifics on how much to raise the child tax credit by has led to "frustration" among GOP lawmakers, said Representative Chris Collins, a New York Republican and ally of President Donald Trump. The early concern previews the political arguments that will surround tax legislation as Congress focuses in on it.

Collins said more specifics about GOP plans to increase the child tax credit would make the benefit for middle-income families clearer. Instead, Republican lawmakers are fending off attacks that some middle-income families would be hurt because the plan calls for eliminating dependent exemptions and the state and local tax deduction.

Trump has repeated similar lines -- that the middle class will be the plan’s main beneficiaries. But the rhetoric so far doesn’t match up with the few details released on Sept. 27 -- and some recent analyses by Washington policy groups have used specifics from earlier GOP tax proposals in combination with the latest framework to find that some middle-income taxpayers might pay more.

“Of course I want to see more about the middle-class tax relief,” said Senator John Kennedy, a Louisiana Republican. “How you fill in the details is going to be left up to Congress. Congress may not even follow the outline.”

The uneasiness comes as the House and Senate move to kick off the tax debate with a budget maneuver that would allow them to pass a bill without Democratic support. GOP leaders say they want to complete the bill in 2017 to prevent election-year politics from getting in the way. But divisions linger in the party over core questions such as how much a tax cut can add to the deficit and how to find revenue offsets so changes to the tax code can be permanent.

The plan sets out three tax brackets for individuals -- 12 percent, 25 percent and 35 percent -- down from the existing seven rates, which top out at 39.6 percent. But it doesn’t specify the income ranges for the new rates, and congressional tax-writing committees will be given flexibility to add a fourth bracket for the highest earners.

The framework also calls for a near-doubling in the standard deduction for households, a “significant,” yet unspecified increase in the child tax credit and the elimination of personal exemptions for dependents.

A study by the nonpartisan Urban-Brookings Tax Policy Center found that most middle-income families would enjoy after-tax gains under the GOP framework, but that taxes would go up for almost 30 percent of people making $50,000 to $150,000. House tax-writing Ways and Means Chairman Kevin Brady blasted that study as “a work of fiction that Stephen King would’ve been proud of.” Trump’s chief economist Kevin Hassett said it used “imagined numbers” to fill in the blanks. The study said it used brackets outlined in the House GOP tax blueprint released in 2016.

Asked about the White House’s position that the tax plan is aimed at helping the middle class, Senate Democratic Leader Chuck Schumer was blunt: “I’ve never heard such a fraudulent statement.”

Kennedy said he, along with his fellow senators, are anxious to see the real numbers that will be used for the income brackets.

Those details are still being worked out and will be set by House and Senate tax-writing committees, White House Budget Director Mick Mulvaney said during a Fox News interview that aired Sunday. “We’ve not released the details,” he said. “Why? Not because they’re hidden. We don’t have them in a vault someplace. We simply haven’t settled on them yet.”

Kyle Pomerleau, a federal tax expert with the Tax Foundation, said Republicans have two key options to mitigate possible tax hikes for middle-income earners. The first is to raise the income threshold subject to the lowest tax rate to make sure it applies as broadly as possible. The second is to boost the size of the child tax credit, which is currently $1,000 per child under 17. He said a $500 increase may be a starting point, but that may rise in the Senate, where Florida’s Marco Rubio and Utah’s Mike Lee have proposed a $1,000 boost.

That could ease some of the concerns about tax increases on the middle class, Pomerleau said. Leaving those kinds of questions unanswered in the framework was “a double-edged sword” for congressional leaders, he said: On one hand it helped stir fears about a middle-class tax hike, but on the other hand, it provided “leeway to the committees to negotiate.”

House members in high-tax states -- such as Collins and New Jersey’s Leonard Lance -- want to offer further tax relief by preserving the $1.3 trillion state and local tax deduction, saying it would hit middle-income people they represent. Others want to eliminate that tax break, as the framework suggests, to help pay for rate cuts. Not all Republicans agree.

“It may be an important consideration for folks in high-tax states, but I’m not sure how y’all want me to sell to the South Carolinian that he or she should subsidize the taxes for folks in New York or California,” said Senator Tim Scott, a South Carolina Republican who sits on the tax-writing Finance Committee.

Amid the uncertainty for the middle class, the framework includes hundreds of billions in tax cuts that would directly benefit top earners and the wealthy, such as slashing the pass-through rate to 25 percent, repealing the Alternative Minimum Tax and ending the estate tax.

Pomerleau argued that the top rate would likely have to be higher than 39.6 percent to offset the pass-through cut -- currently, pass-through businesses are taxed at individual income rates as high as 39.6 percent. Other options to balance out benefits for top earners would be raising rates for capital gains and investment income, he said. The framework was silent on the treatment of capital gains and investment income. Both moves would likely encounter stiff opposition within the GOP.

The Senate Budget Committee on Thursday approved the vehicle for tax legislation, sending it to the full Senate for a vote this month. Republicans on the panel joined Democrats in trying to give more of a middle-class emphasis to the tax plan by including certain amendments. One calls on the Congressional Budget Office and Joint Committee on Taxation -- Capitol Hill’s official scorekeepers -- to provide estimates of how the tax legislation would affect people with different income levels.

CBO, the nonpartisan scorekeeper, proved to be a formidable referee for Republicans during the Obamacare repeal debate, finding that their health-care legislation would have caused millions to lose their coverage. It gave Democrats a powerful cudgel that helped scuttle the effort, even though many Republican lawmakers tried to discredit the budget office’s findings.

Brady has stopped short of guaranteeing that no middle-class American would see a tax hike, but insisted that a tax bill would make things better for them.

“I guarantee you we are going to improve the lives of every American, driving down taxes and increasing their wages,” he told reporters last week.

Trump continues to sell his plan as a massive tax break.