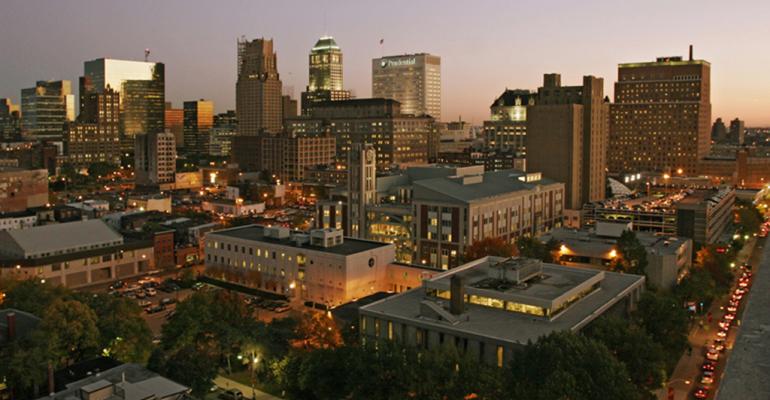 In Shadow of Manhattan, a Long-Neglected City Is Having a Moment

(Bloomberg)—For years, downtown Newark’s Military Park, barren and surrounded by vacant buildings, was a symbol of the despair that set in after the 1967 riots. Now it’s at the center of hope that a long-sought recovery for New Jersey’s biggest city may finally be taking hold.

Across from the park’s northern edge, the old Hahne & Co. department store debuted last month as a $174 million redevelopment with 160 apartments and a Rutgers University arts program and jazz museum currently displaying such artifacts as Miles Davis’s trumpet and a gown worn by Ella Fitzgerald. There will also be offices, a restaurant by celebrity chef Marcus Samuelsson and a Whole Foods supermarket that’s set to open March 1, bringing life to a building that had sat empty since 1987.

A reputation for crime and poverty has kept Newark, just 10 miles (16 kilometers) west of Manhattan, mostly on the sidelines of the urban revival that’s transformed swaths of blight into trendy neighborhoods across the U.S. A surge of construction, with the Hahne’s project at its heart, is a sign the city’s luck may be about to change. Developers and their backers -- Prudential Financial Inc. and Goldman Sachs Group Inc. among them -- are aiming to build the critical mass needed for Newark to improve its image and fill new towers with residents who prize affordability and easy access to mass transit.

The city is “probably the beneficiary of an overheated New York market, where there’s money looking to land,” said Jeff Kolodkin, a New Jersey-based managing director at brokerage Newmark Grubb Knight Frank. With a multitude of companies investing in Newark, “even if a project or two doesn’t go as well as everyone would hope, all of them are not going to go bad.”

About 2,000 residential units were approved for construction last year, adding to the 2,000 that have been built since 2014, according to the city Department of Economic and Housing Development. In that period, about $1.7 billion has been invested in residential, commercial and industrial projects.

Newark’s comeback has been predicted before -- in the late 1990s with the opening of the New Jersey Performing Arts Center and a minor-league baseball stadium, and again almost a decade later with the Prudential Center hockey arena -- but the hoped-for revival never fully blossomed.

“Folks have been probably overlooking Newark for a long period of time,” Mayor Ras Baraka said in a phone interview. “It just needed us to be really focused on it, market it, to push hard around development.”

Prudential, founded and based in Newark, is backing multiple projects, including a 22-story rental property rising near the arts center, to be called One Theater Square, and a conversion of the old New Jersey Bell office tower into apartments.

The insurer provided two-thirds of the $30 million of equity for the Hahne’s project, with the rest coming from L+M Development Partners Inc., a New York-based real estate firm, and Goldman Sachs. Citigroup Inc. and Morgan Stanley made loans. The developers received city tax abatements in return for reserving 40 percent of the apartments for low- and moderate-income renters, and hiring Newark residents to help reconstruct the circa-1900 property.

“That’s why we feel like the proposition is so reasonable,” said Jonathan Cortell, vice president of development for L+M. “We’re asking the metro New York area to re-embrace Newark, in part because it’s stupid-expensive to rent in New York.”

Military Park, 6 acres (2.4 hectares) that date back to the city’s founding in 1666, has itself gotten a makeover. The once-desolate commons now features fresh plantings, a carousel, a hamburger restaurant, weekly midday yoga classes and a schedule of arts and culture programs. The design was conceived by Biederman Redevelopment Ventures, the firm responsible for a similar overhaul of Manhattan’s Bryant Park.

“In Newark, everyone fled from public space, people were afraid of being assaulted,” said Dan Biederman, the firm’s president. “It was so deserted, I’m not sure there was that much crime.”

Revival efforts got a jump start under Cory Booker, mayor from 2006 to 2013, who convinced Wall Street titans such as Bill Ackman, Leon Cooperman and Julian Robertson that the city was worth saving. Booker, now a U.S. senator, drew in more than $250 million in pledges, including $100 million for schools from Facebook Inc. Chief Executive Officer Mark Zuckerberg.

Newark remains a long way from a full-fledged cultural and real estate renaissance. A study of government data released in December by WalletHub, a web-based credit-counseling service, ranked Newark the 14th neediest among the 150 largest U.S. cities, and fourth-worst for health and safety. About 30 percent of the mostly black and Hispanic population live in poverty, according to a 2015 Census Bureau survey.

“You’re talking about 40 or 50 years of neglect, and you can’t turn that around overnight,” said Hersh, who noted that about a half-dozen of his students are working on projects in Newark, which wouldn’t have happened in the past. “But you’re beginning to see a bit of an upturn.”

Previous attempts at reviving Newark after the July 1967 riots -- six days of uprisings and police brutality that killed 26 people -- were geared toward commuters and people visiting for a sports event or performance, said Mark Krasovic, interim director of Rutgers-Newark’s Clement A. Price Institute. One early effort revolved around the Gateway Center, a group of skyscrapers with garages and walkways connected to Newark’s Penn Station rail hub, so workers heading home to the suburbs never had to set foot above ground and contribute to the street life.

In a lot of people’s minds, the riots made Newark “a place they were afraid to go to, that became marked by violence,” Krasovic said. “That’s a trope that still isn’t quite dead, although I don’t think it holds as strong a grip on the city as it used to.”

Violent crime fell about 21 percent in the three years through 2016, according to a Rutgers University analysis of data from the FBI and Newark Police Department. There were 2,764 violent crimes last year, compared with 3,516 in 2013.

“Though the world focuses on it,” crime in Newark “is moving downward and not upward,” Baraka said. “We’re not just trying to develop a downtown that is safe. We’re also trying to spread that into neighborhoods and the community at the same time.”

For Prudential, investment in its home city has totaled $907 million since 2010, including $500 million on its headquarters tower. The insurer has bankrolled 1,028 new dwellings in that time, including a 206-unit development downtown called Teachers Village.

At Theater Square, Prudential and Fifth Third Bancorp are backing developer Dranoff Properties. Rents will range from $1,250 to $4,500 a month, and 24 of the 245 units are to be designated affordable. Prudential is also providing debt for the New Jersey Bell tower conversion, teaming again with L+M, which last year bought the property for $16.5 million. Plans call for maintaining the art-deco facade of the landmarked sandstone skyscraper, built in 1929 by Ralph Walker. While Prudential has stuck with Newark since its founding in 1875, now is an especially good time to invest in the city, said Ommeed Sathe, the company’s vice president for impact investments at the insurer. Backing from equity partners such as L+M is “a huge sign of confidence, crucial to bringing in other capital providers,” and helps ensure that “a project is going to be done with the utmost quality, on time and on budget,” Sathe said.

Newark’s base of office tenants has expanded in recent years to include electronics maker Panasonic Corp., audio-book seller Audible.com and telecommunications company IDT Corp., all of whose names adorn the tops of the downtown buildings they occupy.

The revival is starting to show up in rising property prices, with a two-building office complex selling in September for $174.5 million, up almost 20 percent from when it last sold a decade earlier, data from Real Capital Analytics Inc. show.

Mayor Baraka said Newark is intent on not becoming “another Brooklyn,” and allowing longtime residents to be displaced by affluent gentrifiers. He backs an “inclusionary” zoning proposal now working its way through the city council that requires 20 percent of multifamily projects to be affordable.

Joseph Della Fave, director of the civic group Ironbound Community Corp., said he believes Newark can avoid the mistakes other cities have made in their push to revitalize. He was born and raised in Hoboken, just across the Hudson from Manhattan, and witnessed the start of its transformation into a bedroom for the wealthy while on the city council in the ’80s.

“I don’t consider that a good model -- people were forcibly displaced,” he said. In Newark, “I think the mayor and the council members believe in justice and equity.”