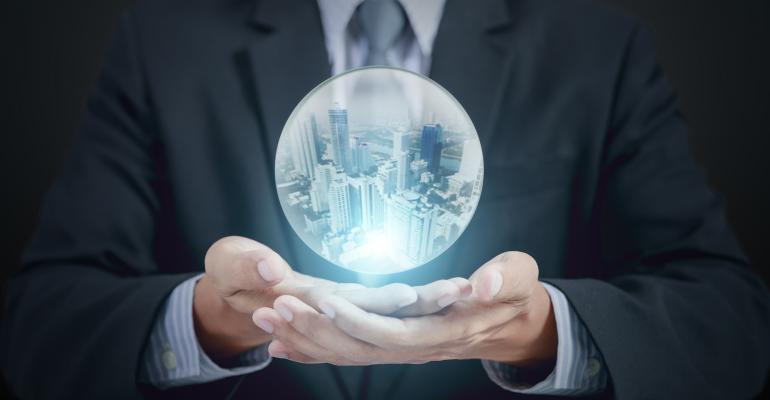 As U.S. economic growth begins to moderate following a long period of expansion, commercial real estate should continue to hold its own. This was one overarching theme in the Urban Land Institute’s (ULI) Real Estate Economic Forecast, a semi-annual survey of economists and analysts on the state of the real estate industry, which was released Wednesday during a webinar presentation.

Still, even though the industry should still see positive returns and overall price growth, that growth will likely slow from the levels seen in recent years as the economy will begin to lose steam.

Here are some highlights from the report and the presentation.

2. Total annual returns—and pricing—will also fall. The Real Capital Analytics CPPI saw 7.7 percent growth in 2017, and ULI survey respondents expect to see this growth fall to 6.0 percent in 2018 and continue to drop one percentage point in both 2019 and 2020. The 17-year average for the index is 4.4 percent in annual increases. The CPPI tracked by Green Street Advisors, a real estate research firm, has remained at roughly the same level for the past couple of years. The firm has previously said it expects commercial property prices to remain stable for the next six to 12 months. NCREIF total annual returns are expected to drop to 6.5 percent this year from 7.0 percent in 2017 and to continue sliding over the next two years.

3. Cap rates will rise. The NCREIF cap rate is expected to stay at 5.0 percent this year, then rise to 5.1 percent next year and 5.3 percent in 2010, as the 10-year Treasury rate is projected to rise, according to ULI’s forecast. Green Street has also already seen cap rates rise in most sectors.

4. Industrial returns will be strong, but lower than they have been. The popular industrial sector saw 13.1 percent total annual returns, according to NCREIF, almost three percentage points above the 10.4 percent 20-year average. For 2018 and beyond, returns will still be positive, but not as strong, according to ULI. This year returns are expected to come in at 11.4 percent, followed by 9.0 percent in 2019 and 7.2 percent in 2020.

5. Apartment, retail and office investors can expect a somewhat similar range of returns. The ULI forecast projects that these three sectors will see NCREIF total annual returns in the 4.0 to 6.0 range, with retail at the lower end of the range and the apartment sector at the higher end. All three segments will see returns slide this year and the two years after. “I was shocked, honestly, that there was very little difference between apartment, office, retail,” says Melissa Reagan, managing director and head of Americas real estate research at TH Real Estate, who was one of the panelists featured during the webinar.

6. The economy will keep expanding for the next three years. The analysts and economists surveyed forecast continued economic expansion in 2018 and 2019, but the growth is expected to slow in 2020. GDP is expected to grow 3.0 percent in 2018, then drop to growth of 2.5 percent the following year and to 1.7 percent in 2020. Unemployment is anticipated to stay in the 3.8 percent to 4.0 percent range for these three years. One wild card in the future of the economy are trade disputes, which could cause inflation to soar, says Tim Wang, managing director and head of investment research at Clarion Partners, who was also a panelist. But for the next two years, growth should be strong thanks to tax reform and increases in government spending, he notes. “The question is, what’s going beyond that? Our firm’s view is slower for longer. So, we’re pretty much in the camp that this cycle could last a lot longer than people had anticipated,” he said. “The question is, can we continue to grow without overheating?”