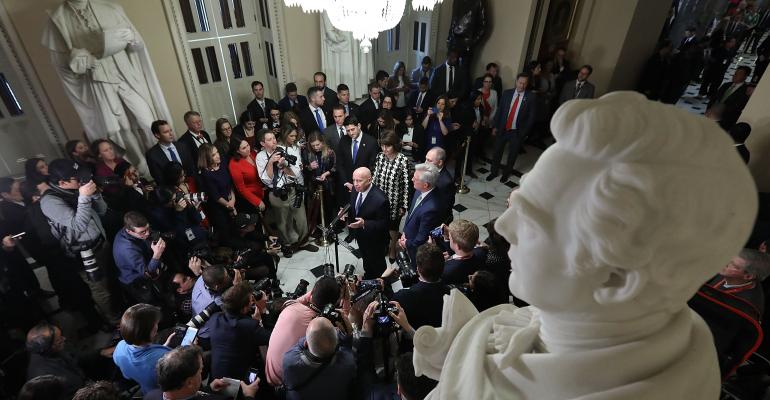 The Tax Bill Is a Clear Boon to the CRE Industry. Will It Prove Too Much of a Good Thing?

In a first major legislative victory for the Republican Party since President Trump took office, the House and Senate have passed the Tax Cuts and Jobs Act. The $1.5 trillion bill marks the first major overhaul of the U.S. tax code since 1986 and is expected to be a great boon for commercial property owners. Industry analysts predict the new tax code will strengthen demand in the multifamily sector and spur corporations to put more money into real estate assets and new development, in addition to preserving or improving most of the existing tax breaks for real estate investors.

There is some anxiety, however, that the tax rules might prove to be too much of a good thing for an industry whose major downfalls tend to be over-borrowing and over-building.

As of the third quarter of 2017, commercial/multifamily debt outstanding totaled $3.1 trillion, an increase of 1.5 percent from the quarter before, according to the Mortgage Bankers Association (MBA), an industry trade group. Third quarter also marked an uptick in the amount of CMBS debt outstanding, bringing to an end a trend that started at the height of the financial crisis in 2008.

According to a white paper produced by research firm Reis Inc., commercial property owners “are easily the biggest beneficiaries of this tax bill.” The 1031 exchange provision remains in place. Commercial property landlords will still be entitled to a full mortgage interest deduction, in addition to benefitting from the reduced corporate tax rate of 21 percent. The tax bill reduces the depreciation period for multifamily and commercial properties to 25 years. Previously, the depreciation period for multifamily properties was 27.5 years and for commercial properties 39 years. Pass-through entities such as LLCs and partnerships, commonly used in the commercial real estate industry, will benefit from a lower tax rate. Partners in such entities will now be taxed at their individual tax rate less 20 percent deduction for business expenses.

The reduction in the depreciation period is a point of concern for Jim Costello, senior vice president with research firm Real Capital Analytics (RCA). He notes that a similar measure enacted as part of the 1981 tax reform package led to over-building and an eventual real estate bust. “In this world of low yields and high prices, investors may take on more risks to generate their needed returns, so does development come on strong again?” Costello asks.

When it comes to the bill’s impact on the larger economy and the hope that it will spur greater economic growth and the creation of new jobs, the reasoning “does not hold water,” according Costello. “The only way to generate stronger growth is through productivity improvements and that comes from investment in infrastructure, plant and equipment. Corporations already are swimming in cash and are not investing,” he says.

There is also the question of the bill’s cost—it is expected to add $1 trillion to the U.S. government’s debt load. This, in turn, will force the government to issue more Treasury securities to finance the debt, Reis researchers argue. “If interest rates rise as a result, higher borrowing costs will hurt the housing market even more, as well as the overall economy, possibly slowing growth.”

Reis predicts the new tax plan will likely be a net positive for the multifamily sector by discouraging home ownership. Under the current tax plan, many home owners take advantage of the mortgage interest deduction to make the cost of owning a home pencil out for them. The new plan will, in many cases, make it more financially viable for tax filers to take advantage of the increased standard deduction rather than relying on itemized deductions like mortgage interest. In addition, while the new tax framework will continue to allow for mortgage interest deductions, it eliminates the deduction for home equity loans.

Like Costello, Reis researchers argue the new tax bill may spur a construction boom, as it will allow businesses to immediately expense multiple types of asset purchases, including real estate. This may be particularly true in the growing e-commerce sector, where companies might now be able to take advantage of the new expensing rules to build more of their own warehouses. The concern is that more construction may also occur in office and retail sectors, which are already suffering from a supply/demand imbalance in certain markets.

As has been widely reported, the new $10,000 cap on the deductions for state and local taxes (SALT) will likely put a higher tax burden on residents of high-tax states, including New York and California. However, given that many cities in these states serve as major employment, culture and education hubs, Reis researchers do not expect the tax bill to create a mass exodus from places like New York and San Francisco. Rather, residents might be more likely to move from urban to suburban areas. “The net outflow of people will hurt multifamily and commercial real estate properties in high-tax cities that cannot deliver on desirable amenities,” Reis researchers write.

In addition, the cap on state and local tax deductions may create a setback for the larger economy, in Costello’s view. He notes that the U.S. economy is “a series of local economies.”

“The elimination of the SALT deduction will increase the tax burden on those local economies that are the most productive and contribute the most to economic output,” he says. “With pressure on local taxing authorities, it will add new difficulties for these productive parts of the U.S. economy as they try to invest in the infrastructure that they need to stay competitive.”

Among the metros likely to suffer most from the cap on SALT deductions, based on the percentage of households that itemize their taxes, are suburban Virginia, suburban Maryland, Long Island, N.Y., Westchester County, N.Y., Fairfield County, Conn., Baltimore, Central New Jersey, San Jose, Calif. and San Francisco, according to Reis.