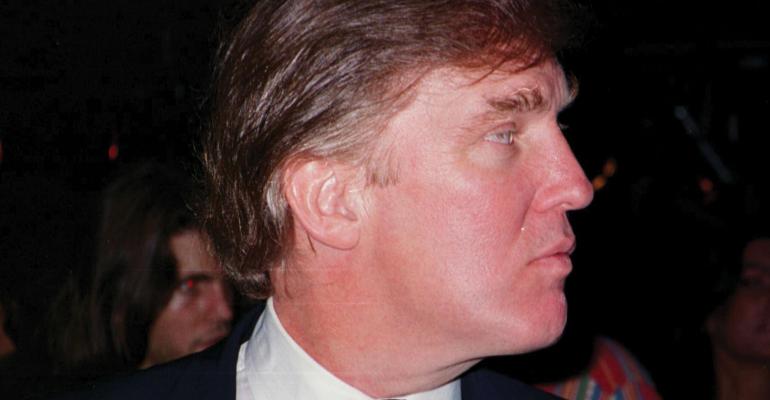 Trump Companies Were in the Red; He's Reaped the Rewards Since

It’s likely that as Trump’s businesses failed, their losses flowed to Trump’s own returns and were used to offset income made elsewhere.

(Bloomberg)—Real-estate developer Donald Trump in 1992 lived in a New York luxury apartment, traveled by limousine and had personal bodyguards. That year, he also reported a negative $750 million adjusted gross income to the IRS.

How the future president could live so large while reporting such huge losses has been a question since the New York Times revealed a decade of Trump’s tax information last week. While the president claims there were paper losses that could be chalked up to real-estate activities, four tax experts said that for the president to have claimed such a giant negative income, his businesses must have bled money for years.

Real-estate developers enjoy some of the best advantages in the tax code. But the magnitude of Trump’s losses can’t be explained by that alone, the tax experts said.

To have achieved a billion dollars in losses, Trump would have had to lose actual money. And the fact that he continued to live in high style even after such failures means he would have had to either lose someone else’s money or get cash injections from another source.

Based on tax transcripts it obtained, the New York Times showed that Trump reported a negative adjusted-gross income for each of the years between 1985 and 1994 and that his core businesses lost about $1.17 billion over that period. Several Trump casinos and other properties declared bankruptcy in the early 1990s.

Charles Harder, a lawyer for Trump, did not respond to a request for comment.

The president on Twitter last week said the losses were due to “massive write offs and depreciation which would, if one was actively building, show losses and tax losses in almost all cases.”

Trump, like most developers, likely owns dozens of so-called pass-through entities such as partnerships or LLCs. Those companies don’t pay income tax at the corporate level. Instead, the income flows through to their owners’ personal tax returns. That means when the businesses post losses, the owners can count it against their other income, even if it has nothing to do with the business.

Real-estate developers get huge deductions of paper losses that help reduce their tax bills, and the losses are magnified by the leverage they typically take on most purchases.

The main such deduction stems from the Internal Revenue Service’s determination of the useful life of a building. A typical commercial property, according to the IRS, can last 39 years. In return, the IRS allows the building’s owner to take a loss of 1/39th of the building every year. So for a building that costs $10 million -- not including the land underneath it --the developer could take a loss of more than $256,000 every year and count that against his or her other income, even if it has nothing to do with the building.

The more debt a developer has, the stronger the effect, said Gary DuBoff, a principal in the tax and accounting department for MBAF, an accounting firm in New York. Even if the developer only invested a fraction of his own money in the property and borrowed the rest, he still gets to take depreciation on the entire $10 million purchase. The interest expenses on his mortgage are also deductible.

Add it all up and real-estate developers get one of the best suites of tax deductions available to any business owner, said tax attorney Jonathan Blattmachr. “If I had my life to live over again, I would have gone into real estate,” Blattmachr said.

Yet even those deductions aren’t enough to explain Trump’s losses, according to Blattmachr and three other tax attorneys. The losses in the Trump core businesses in the decade through 1994, would have required Trump and his companies to own billions of dollars more in real estate than he did.

“I am skeptical of the claim that his losses were largely attributable to depreciation expenses,” said James Repetti, a tax-law professor at Boston College Law School. Repetti said hotel chains whose expenses might be comparable to those of casinos that Trump owned at the time show it was unlikely he could have depreciation expenses anywhere close to what he claimed in losses.

It’s much more likely that the failure of Trump’s companies in the 1980s and 1990s generated hundreds of millions in losses, said Steven Rosenthal, a senior fellow at the Urban-Brookings Tax Policy Center. As the businesses failed, their losses flowed through to Trump’s own returns, and he used them to offset any income he made elsewhere.

Trump also appears to have tried to stretch the tax code to magnify those benefits even more, Rosenthal said.

Usually, when a company’s debt is forgiven or restructured, it has to count the reduction in debt as income, which lowers the loss the company can take for tax purposes. Bankruptcy court documents revealed in 2016 that Trump used an unusual method that let him avoid counting the forgiveness as income by trading the debt for shares of other partnerships. That, in effect, let him use his creditors’ losses to his own benefit, Rosenthal said.

“Was Trump worse off after a decade of red? Not really because it was other people’s money,” Rosenthal said.