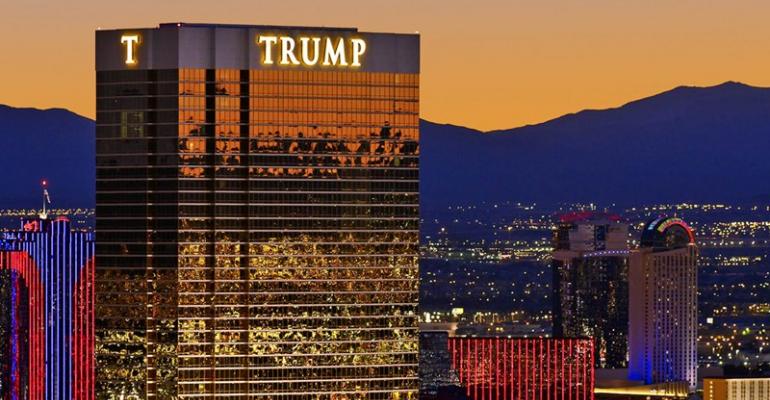 Trump Hotels, Amid Calls to Divest, Instead Plans Expansion

(Bloomberg)—Only days after Donald Trump took the oath of office, the head of his hotel-management company outlined hopes for an ambitious expansion across the U.S., raising new questions about potential conflicts between his business and the presidency.

“There are 26 major metropolitan areas in the U.S., and we’re in five,” Danziger said after a panel discussion Tuesday at the Americas Lodging Investment Summit in Los Angeles. “I don’t see any reason that we couldn’t be in all of them eventually.”

Meanwhile, new membership fees at Trump’s Mar-A-Lago club have doubled to $200,000, Bernd Lembcke, its managing director, said in a Wednesday e-mail, first reported by CNBC. The Palm Beach, Florida resort, which Trump has called “The Winter White House,” was the location of the president’s New Year’s Eve celebration with family and supporters. He tweeted a photo of himself writing his inaugural speech at the resort last week.

Most ethics experts, including the agency that monitors such matters in the federal government, have said Trump should divest his holdings entirely. The expansion -- which has the potential to benefit from Trump’s actions and profile as president -- could spark further controversy. Democratic lawmakers have also called on Trump to divest his businesses to avoid conflicts of interest, and he has refused to do so.

Even if his business activities are considered legal, they certainly heighten the perceived conflict, according to Wendy Patrick, who teaches business ethics at San Diego State University.

“Although he is now officially the leader of the free world, Donald Trump remains both a businessman and a brand,” Patrick said in an e-mail. “The fact that the hotel chain that bears his name is seeking to expand within the United States raises questions of both law and ethics.”

Instead of divesting, Trump has turned over management of his company, the Trump Organization, to his two elder sons and pledged no new foreign deals during his term. He has financial ties to $3.6 billion of assets in about 20 countries and more than $600 million of debt. Jennifer Rodstrom, a spokeswoman for Trump Hotels, didn’t immediately respond to a call and e-mail seeking comment.

Trump Organization officials will ask a Washington attorney and a veteran executive in President Trump’s businesses to help ensure separation between the White House and the family business, according to a person familiar with the matter. Bobby R. Burchfield will become the business’s chief compliance counsel and George A. Sorial will be its chief compliance officer, the person said.

Having Trump hotels in 26 cities would triple the current total. Trump’s company manages eight namesake hotels in the U.S., some of which the Trump family owns. Danziger, who joined Trump Hotels in August 2015, said that Trump Hotels is considering opening luxury properties in Dallas, Seattle, Denver and San Francisco, where he started his career in 1971 as a bellman at a Fairmont hotel.

New Trump-branded luxury hotels would be only in major cities, while the company’s new lower-priced Scion-branded properties would operate in smaller cities, Danziger said during the panel discussion. The first Scion hotel will open this year, he said.

Shortly before the Nov. 8 election, Danziger told media in Hong Kong that the company, as part of an international expansion, had plans for hotels in China -- a country Trump has repeatedly criticized over trade deals and U.S. job losses. “That’s pretty much off,” Danziger said during the panel discussion, drawing laughter from the audience.

Danziger declined to say where the first Scion hotel will be located. Planned Scion hotels range in size from 72 rooms to 800, he said.

“Both brands and any others we create will have a domestic emphasis for the next four or eight years,” he said, also drawing laughter.

Trump’s hotel business consists mainly of branding and management contracts, and the expansion may involve converting existing properties. His Washington property has become the focus of controversy because of concern that foreign-government patronage could violate the constitutional ban on emoluments, and because no elected official is allowed to benefit from the lease on the building, which is rented from the federal government.

Besides the four-month-old Washington hotel, there are two properties in New York, one in Chicago, one in Las Vegas, and the Trump National Doral golf resort in Miami. A new luxury hotel in Vancouver is set to have its grand opening next month.