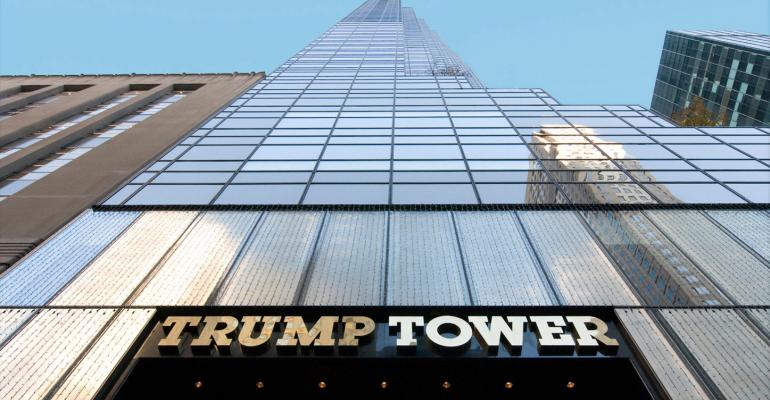 The change, which would allow real estate businesses to take advantage of a new tax break for "pass-through” businesses, combined elements of House and Senate legislation.

(Bloomberg)—Lawmakers scrambling to lock up Republican support for the tax reform bill added a complicated provision late in the process -- one that would provide a multimillion-dollar windfall to real estate investors such as President Donald Trump.

The change, which would allow real estate businesses to take advantage of a new tax break that’s planned for partnerships, limited liability companies and other so-called “pass-through” businesses, combined elements of House and Senate legislation in a new way. Its beneficiaries are clear, tax experts say, and they include a president who’s said that the tax legislation wouldn’t help him financially.

“This last-minute provision will significantly benefit the ultra-wealthy real estate investor, including the president and lawmakers on both sides of the aisle, resulting in a timely tax-reduction gift for the holidays,” said Harvey Bezozi, a certified public accountant and the founder of YourFinancialWizard.com. “Ordinary people who invest in rental real estate will also benefit.”

James Repetti, a tax law professor at Boston College Law School, said: “This is a windfall for real estate developers like Trump.”

The revision might also bring tax benefits to several members of Congress, according to financial disclosures they’ve filed that reflect ownership of pass-through firms with real estate holdings. One such lawmaker, Republican Senator Bob Corker of Tennessee, who’d voted against an earlier version of the legislation, said on Friday that he would support the revised legislation.

Corker said in an interview on Saturday that his change of heart had nothing to do with the added benefit for real estate investors. On Sunday he wrote to Senate Finance Committee Chairman Orrin Hatch seeking an explanation for how the provision came to be included in the final bill after being asked about it by a reporter.

“The suggestion was that it was airdropped into the conference without prior consideration by either the House or the Senate,” Corker said, adding that he’d been informed over the weekend that a similar provision had been in the House version.

Last month, during a speech in St. Charles, Missouri, Trump took pains to tell his audience that the tax-overhaul bill would hurt him personally. “This is going to cost me a fortune, this thing,” he said. “Believe me.”

“The president’s goal in tax reform was to create a bill that gives middle-income families a big tax cut and stimulates economic growth so they can continue to feel that relief for years to come,” Walters said in an emailed statement.

It’s impossible to gauge precise effects on Trump, who has departed from roughly 40 years of tradition for presidential candidates by refusing to release his tax returns, saying they’re under audit. Nonetheless, his financial disclosures show he’s used an array of pass-through businesses, including in his real estate ventures.

Trump’s building at 1290 Avenue of the Americas had $77.7 million of net operating income on $137.9 million of revenue in 2016, the lender filings show. Trump owns 30 percent of it. He has a similar arrangement with the building’s majority owner, Vornado Realty Trust, for an office complex in San Francisco.

Kushner’s family owns Kushner Cos., which could also benefit from the revision. Through various LLCs and partnerships, the family collects tens of millions in rent from apartment complexes and office properties in New York, New Jersey and Maryland.

The last-minute change to the tax bill -- which combined a capital-investment approach that the House favored with the Senate’s tax-cut mechanism -- would, in effect, free up a 20 percent deduction on pass-through business income that would have been off-limits to many real estate firms under the Senate bill. The change would still leave some investment partnerships out: those that have few employees and invest in tangible property like land or artwork, said Michael Kosnitzky, a tax partner at Pillsbury Winthrop Shaw Pittman LLP.

The distinction centers on whether tangible property held by a business is “depreciable” -- meaning it can be reflected as declining in value over time under accounting rules -- even though it may rise in market value. Depreciable property includes apartment buildings, housing complexes, office towers and shopping centers.

Deciding how to tax pass-through entities, which form the backbone of American business, has been one of the most contentious debates among Republican tax writers in their rush to rewrite the tax code and notch a major policy win by the end of this year. Such businesses, which also include sole proprietorships and “S corporations,” don’t pay taxes themselves, but pass their income to their owners, who then pay tax at their individual rates.

Because their tax bill would slash the tax rate for “C corporations” -- a business type that includes major, publicly traded companies like Exxon Mobil and General Electric Co. -- to 21 percent from 35 percent, the Republican tax writers have been under pressure to deliver comparable tax relief to pass-through businesses.

The bill seeks to do that by setting up a 20 percent deduction on pass-through business income -- and making it available to both local pizza shop owners and major, nationwide businesses, all while setting up guardrails to prevent owners from mischaracterizing high-taxed wage income as lower-taxed business income.

The deduction is broadly available to owners of pass-through entities up to an income threshold of $207,500 for singles and $415,000 for couples. After that, limits begin to kick in that would prevent various kinds of “service” providers -- including doctors, lawyers, investment advisers and brokers, and professional athletes -- from receiving its benefit at higher income amounts.

The Senate approved legislation on Dec. 2 that included a way for owners of large firms with lots of employees to avoid certain income limitations on the deduction: They’d be allowed to deduct half of their share of the W-2 employee wages their companies paid out annually.

That approach would have left out real estate firms, which typically have relatively few employees but large capital investments. For them, the compromise bill offers an additional method: deduct 25 percent of wages paid, plus 2.5 percent of the purchase price -- or “unadjusted basis” of their tangible, depreciable property.

But no matter the method, owners would be limited to no more than an overall 20 percent deduction.

Offering the 20 percent deduction to businesses that don’t tend to employ many people is “in a sense contrary to the Administration’s job creation policy initiatives,” said Pillsbury Winthrop’s Kosnitzky.

But “many capital-intensive industries are indirect job creators -- putting contractors, subcontractors, tradesmen and other to work,” said Ryan McCormick, senior vice president and counsel at the Real Estate Roundtable, a trade group.

Details of how lawmakers decided on their final approach are sketchy. On Sunday, Senate Majority Whip John Cornyn suggested the change was made as part of a process to “cobble together the votes we needed to get this bill passed.”

“We were working very hard,” he said during an appearance on ABC’s “This Week.” “It was a very intense process.”

The International Business Times, which first reported on the revision’s potential effects on various elected officials, noted that it could benefit several members of Congress who have real estate investments via pass-through businesses. That includes Corker, who was the only Republican senator to vote “no” on earlier Senate legislation. The Senate approved that measure nonetheless on a 51-49 vote, which set the stage for reaching last week’s final compromise with House leaders.

Corker said Friday that he would vote “yes” on the new version -- a reversal that could be meaningful for the bill’s chances. Republicans hold a slim, 52-seat majority in the 100-seat Senate, and Republican Senator John McCain of Arizona, who’s being treated for brain cancer, is not expected to vote this week. Corker’s switch gave GOP leaders an extra measure of certainty.

Corker told Bloomberg News Saturday that he wasn’t aware of the new benefit for real estate investors when he decided on Thursday to back the final bill based on a two-page summary he’d seen. The bill text was released Friday.

Corker filed a financial disclosure earlier this year showing that among other interests, he had ownership in Corker Properties X LP, a partnership that owns a building in Chattanooga, Tennessee, according to local property records. Corker listed income from the property between $1 million and $5 million in 2016. Still, it’s not clear how much benefit he might receive from the bill.

Corker cited concerns about the deficit for his previous opposition, and tax writers have done nothing to alleviate the deficit impact. The Congressional Budget Office estimated late Friday that the revised measure would increase federal deficits by $1.455 trillion over 10 years, a projection that’s slightly higher than for the version Corker opposed previously.

The senator acknowledged that his deficit argument was unsuccessful, but said he had concluded that the bill’s overall effect would stimulate economic growth for both corporations and small businesses.

“All of that seems worth the risk,” Corker said.