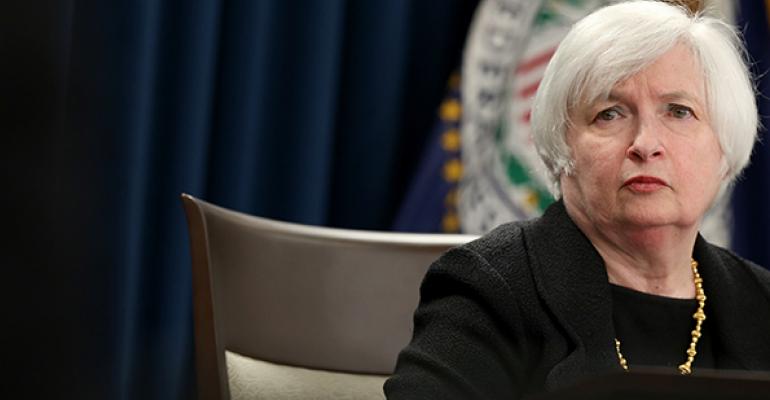 Trump’s Signals on the Fed Are Worthless: Jonathan Bernstein

The unsettling truth is that Trump&rsquo;s decisions on Fed nominations -- among the most important domestic policy moves he&rsquo;ll make as president -- will not follow the usual presidential script.&nbsp;

(Bloomberg View)—With his recent reversal on Janet Yellen and monetary policy in general, smart pundits are spending a lot of energy doping out The New Trump, but as far as I can tell it’s mostly a waste of time. A normal president might settle into a regular pattern. Trump continues to bounce -- seemingly randomly -- between any particular policy and alternatives, including absolute opposites.

So what actually led to Trump’s seeming shift towards potentially keeping Yellen in place as Fed chief and floating a moderate for the open Fed vice-chair in charge of banking regulations? Is it likely that Trump carefully thought through what the Fed does, determined what policies he would like to have going forward, and decided that the current chair is actually pretty good at implementing those policies? Of course not. Nor is it likely his apparent choice of Randal Quarles likely a product of a thorough reconsideration of Dodd-Frank.

What did happen? Maybe something on “Fox and Friends” moved him. Maybe whichever staffer currently in Trump’s good graces did. Maybe Yellen, who apparently has met with Trump, won his support by toasting the unprecedented size of his electoral college victory and inauguration crowd and rapid pace of policy implementation (just to pick a few things Trump constantly brags about despite their not actually being true).

The unsettling truth is that Trump’s decisions on Fed nominations -- among the most important domestic policy moves he’ll make as president -- will not follow the usual presidential script. That’s not only because he himself is ill-informed and erratic; it’s also because he lacks long-time political confidants to ground him and also those who tied to the Republican party.

As Byron York observed, Trump is unusually lacking in supporters who were there from the beginning of his political career. The main exception is Trump’s family, and he’ll always wind up loyal to them over any of the hired help (see also my View colleague Timothy L. O’Brien, who has been invaluable on this theme). What York gets wrong is that recent presidents (unlike those from the 1960s and 1970s) tend to rely mainly on party people, who are not personal loyalists at all. Personal loyalty as the main criterion for White House influence worked poorly for Richard Nixon and Jimmy Carter; attempting to walk down the same path without a quorum of personal loyalists is, well, not likely to have better results.

Indeed, the reason recent presidents -- from Ronald Reagan to Barack Obama -- have been fairly predictable is because they were so thoroughly immersed in their parties. After all, that’s how presidential nomination politics is supposed to work. Parties nominate presidential candidates as part of their competition and cooperation over public policy, and candidates chosen through that process wind up solidly committed to the party’s agenda -- and then find it difficult to betray that agenda even then they have want to.

But almost none of that happened for Republicans in 2016, in part because the party was too dysfunctional to internally negotiate its policy preferences and priorities, and in part because Trump bulldozed the whole process. In the Trump administration, randomness is structural, and is unlikely to go away.

In other words, the best and the brightest can try to figure out the administration’s future monetary policies, or who Trump will pick to fill the other current open seats on the Fed board or whether he’ll keep Yellen next year. They can try to predict the rest of the president’s future policy preferences and priorities while they are at it. But nobody really knows, not least the president himself.

This column does not necessarily reflect the opinion of the editorial board or Bloomberg LP and its owners. Jonathan Bernstein is a Bloomberg View columnist. He taught political science at the University of Texas at San Antonio and DePauw University and wrote A Plain Blog About Politics. To contact the author of this story: Jonathan Bernstein at [email protected] To contact the editor responsible for this story: Mike Nizza at [email protected]. For more columns from Bloomberg View, visit Bloomberg view.