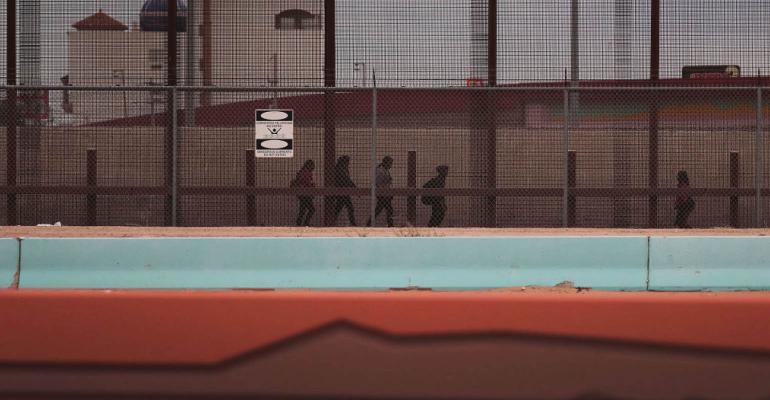 Ranchers and landowners in Texas worry the government will use eminent domain to take away their land to build the wall with Mexico.

(Bloomberg)—Gary Jacobs looks out over the Rio Grande from the deck of the clubhouse at a public golf course in Webb County, Texas. It’s a sunny morning, quiet except for the chirping birds and the thwack of clubs hitting balls.

On this side of the river, a 270-acre plot of land Jacobs and his wife donated to boost the profile of Laredo, a border town about 160 miles (260 kilometers) south of San Antonio. On the other side, Mexico.

Jacobs, like most of Laredo’s 260,000 residents, is talking about President Donald Trump’s border wall, a project that’s engulfing not just the border, but Washington and almost 1 million federal workers who went unpaid during the U.S. government’s partial shutdown.

Texas, a state where Trump defeated Hillary Clinton by 9 percentage points in the 2016 presidential election, illustrates the political complexity of his push. After Trump declared a national emergency Friday to access billions of dollars in funding, some landowners along the U.S.-Mexico line say they see a government land grab in their future.

The logistics of building a barrier are challenging enough. Thousands of creeks called “arroyos” carry rainwater from South Texas thunderstorms to the expansive river, which flows into the Gulf of Mexico. A wall could act as a dam, trapping water on the U.S. side and potentially complicating how Mexicans and Americans share the river for their water supply, says Jacobs.

But his bigger problem with the wall is constitutional.

“The way the eminent domain laws are written, we have no rights,” says Jacobs, who was a former chief executive officer of Laredo National Bank before retiring. “That’s the issue. It’s not what they’re going to build. It’s how they’re taking the land.”

At least one lawsuit is challenging the Trump administration’s emergency declaration, with others likely to follow. The first, brought by the nonprofit group Public Citizen on behalf of private landowners, argues that Trump violated the U.S. constitution’s separation of powers when he invoked the National Emergencies Act.

About two-thirds of Americans oppose Trump’s expansive assertion of presidential authority, according to a CNN poll released Friday.

Property seizure laws set up in the 1800’s leave ranchers and landowners few options. Often, work will already be underway or even finished before a judge rules on whether the money paid to property owners was fair restitution. Apart from the U.S. government claiming eminent domain to build roads, oil and gas companies will use it to lay pipelines through private property. Now, there’s Trump’s wall.

“Philosophically, that’s abhorrent to me,” says Jacobs, 77, who considers himself a Republican though he’s voted for Democrats in the past.

Slap Texans with about 20 cases of eminent domain and Trump’s wall support among the state’s Republicans will take a hit, Mark Jones, a political scientist at Rice University in Houston, said in an interview.

It’s a particularly delicate issue in Laredo. At a Starbucks about two miles off the city’s main highway, a father and son can be heard debating the merits of the wall and the threat illegal immigration poses to residents. Business owners are reluctant to speak publicly about their opinion on Trump’s declaration out of fear of angering regular customers who hold opposing views.

While Jacobs condemns the wall, he makes it clear that he advocates stricter enforcement of immigration laws and supports the local Border Patrol.

It’s a sentiment shared by Mauricio Vidaurri, whose family’s land along the Rio Grande dates back to 1750.

“We welcome Border Patrol to come in and put their sensors, their cameras,” Vidaurri says as he drives his pickup through a gate that leads to one of eight 140-acre plots he shares with his siblings. A few years ago, a house on his sister’s land was damaged by what he thinks was a drug smuggler. Border Patrol came in and installed video cameras and ground sensors, and they haven’t had a problem since.

“The feral hogs are more of a problem,” he says.

Vidaurri works as an inspector for U.S. Customs and Border Protection, so he says he understands the need for strict immigration laws. As a landowner, he says a wall isn’t the right way to go about it.

The wall threatens to cut through earth that literally contains his family’s past. Both his father and grandfather are buried in a family cemetery on the property. In the southeast corner of the lot, an American and U.S. Marine Corps flag wave -- an ode to his father’s service during World War II.

Now, that same government may send a letter any day saying it’s taking the land for a border wall.