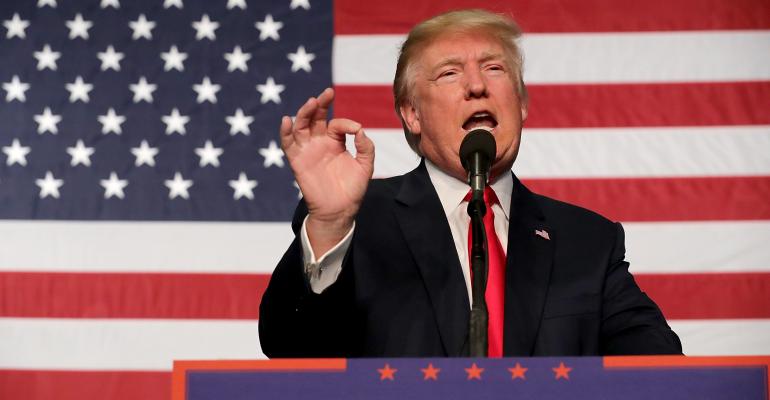 The GOP measure would force companies to include the interest they pay on loans in their taxable income, ending a century-old deduction that&rsquo;s vital to industries including utilities and real estate.&nbsp;

(Bloomberg) -- President Donald Trump’s call for tapping the private sector to help finance $1 trillion in infrastructure improvements faces a little-noticed challenge from his own party -- a House Republican proposal to eliminate the tax break for corporate borrowing.

The GOP measure would force companies to include the interest they pay on loans in their taxable income -- ending a century-old deduction that’s vital to industries including utilities and real estate. If that happens, representatives of those industries warn they’d be saddled with lower profit margins and less likely to seek the loans needed to finance public-works projects.

Lobbying efforts to preserve the current tax treatment of interest are ramping up. The Edison Electric Institute, which represents utilities, is blanketing lawmakers with glossy palm-sized cards and one-page fact sheets that say the interest deduction will encourage private investment in critical energy infrastructure. It’s targeting lawmakers in the House and Senate, and met earlier this month with staffers at the White House National Economic Council, said Eric Grey, a tax expert at the EEI.

“If Congress and the administration are counting on the private sector to help leverage infrastructure but take away the ability of companies to leverage their investment through interest deductibility, then it creates a big problem,” said Matt McDonald, a lobbyist at Hamilton Place Strategies and the treasurer of the BUILD Coalition, which is also trying to preserve the deduction. BUILD met with Shahira Knight, a former executive at Fidelity Investments who’s now working on tax policy at the NEC, and Senate Finance Committee tax staffers on March 21, McDonald said.

Add interest deductibility to the list of policy wrinkles Trump will need to iron out with House Speaker Paul Ryan after the health-care debate that’s currently dominating the House’s agenda. The tax plan that Ryan and other House Republicans support relies on killing the interest deduction to help pay for corporate and income tax cuts. It’s estimated to produce about $1.2 trillion in revenue over a decade, making it the largest revenue generator among provisions in the House GOP tax proposal.

Trump emphasized infrastructure during his campaign and has called for spending as much as $1 trillion on it over the coming years. He hasn’t provided details for the plan, including what kinds of public-works projects would be included or how they’d be paid for -- except to call for “both public and private capital.”

Before the election, U.S. Commerce Secretary Wilbur Ross and Peter Navarro, who heads the White House’s National Trade Council, floated the idea of using a tax credit to spur companies to invest in infrastructure.

A spokeswoman for the White House didn’t respond to emailed requests for comment.

A report released earlier this month by the American Society of Civil Engineers estimated there’s a gap of more than $2 trillion between projected current funding and the $4.59 trillion it would take to improve U.S. infrastructure to a “B” grade by 2025 from it’s current “D+.”

“If the cost of building a bridge increases because the cost of issuing debt has increased, companies are going to look for other, more economic alternatives,” said Henrietta Treyz, a managing partner and director of economic policy at Veda Partners, an investment advisory and policy consulting firm.

The president has said companies should have a choice: either continue to deduct interest expenses or immediately deduct the cost of capital expenses for plants, equipment and buildings, rather than spreading those costs out over several years.

The House GOP plan would allow immediate expensing of businesses’ investments in tangible or intangible assets -- which the plan’s supporters say would mitigate the negative effects of canceling the interest deduction.

The House Republican plan to eliminate the interest deduction promises relief for financial services firms such as banks and insurers -- though it includes no specifics. A spokeswoman for the tax-writing House Ways and Means Committee didn’t respond to emails seeking comment.

For private equity firms, which finance buyouts by saddling companies with debt, the promise of immediately expensing investments doesn’t offer much consolation.

“You’re trading a short-term gain for a long-term increase in the cost of capital, and that doesn’t help asset-light businesses” said Pamela Hendrickson, the chief operating officer of the Riverside Company, a private equity firm.

Rising interest rates might make private sector companies even less inclined to borrow to fund infrastructure projects if the interest deduction ends, said Brai Odion-Esene, a senior director at Hamilton Place Strategies and spokesman for the BUILD Coalition, whose members include the main lobbies for the private equity and real estate industries. The Federal Reserve decided last week to raise its benchmark lending rate.

Eliminating the interest deduction “changes the economics of projects and increases the costs,” said Ryan McCormick, a senior vice president in charge of tax policy at The Real Estate Roundtable, a trade group.

Those who want to preserve the interest deduction could have a harder fight ahead than those battling border adjustments, another revenue generator in the House GOP plan that would tax imports while excluding exports. That measure’s opponents have a somewhat simpler message to consumers -- prices will rise on everything that’s imported from avocados to shoes. Supporters say such effects would be offset over time by a strengthening dollar.

“It’s hard to explain the deduction to people who aren’t accountants,” said Brett Palmer, president of the Small Business Investor Alliance, a trade group for private investors in small companies, which also opposes elimination of interest deductibility. “If it weren’t for so many people riled up over border adjustments, this would be front page news.”