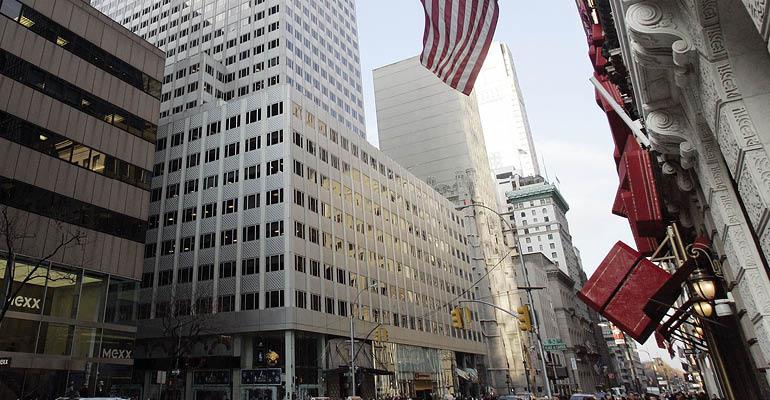 Vornado Has ‘Handshake’ to Sell Stake in NYC Tower to Kushners

The statement, released late Friday, seemed oddly timed and appeared to catch the Kushners off guard.

(Bloomberg)—Vornado Realty Trust says it has an informal agreement to sell its interest in Manhattan’s 666 Fifth Ave. to Kushner Cos., the firm run by the family of presidential son-in-law Jared Kushner.

The statement, released late Friday, seemed oddly timed and appeared to catch the Kushners off guard. It wasn’t clear whether they’d lined up financing for the more than $1 billion required.

In an annual letter to investors, Steven Roth, Vornado’s chairman and chief executive officer, said: “I believe we now have a handshake to sell our interest to our partner at a price which will repay our investment plus a mezzanine-type return,” referring to a type of high-interest loan. The letter was contained in a regulatory filing.

Roth implied the deal was tentative, saying “this situation continues to be fluid -- there can be no assurance that a final agreement will be reached or that a transaction will close.”

Roth’s statement coincides with Passover and the Jewish Sabbath, and the Kushners, who are Orthodox, are unavailable until Saturday evening. Assessing the statement is particularly difficult because, in recent months, Roth and Charles Kushner have increasingly been handling key aspects of the discussions themselves, according to people familiar with the talks.

In the letter, Roth said the loan on the troubled property will be repaid, including the portion held by Vornado. He said Vornado would continue to own the building’s valuable retail spaces.

Many questions remain. There’s only a rough indication of the amount that would be paid and no sense of how such a transaction would be financed. The building has a $1.2 billion mortgage due February 2019. Kushner Cos. executives have searched the globe looking for investors to refinance a redevelopment plan, but potential takers, including China’s Anbang Insurance Group and Qatar’s former prime minister, fell away. No new partners have been announced.

Kushner Cos. has since secured a raft of new financing for other projects, including $200 million from Citigroup Inc. for a New Jersey residential building, and $600 million from JPMorgan Chase and Co. for a Brooklyn development site.

On 666 Fifth Ave., little had spilled into public view until February, but talks have long been contentious because Roth and Kushner have different opinions about the best use of the property and both are hard-nosed negotiators. Some have speculated that the men have been shadow-boxing in the press, with a Kushner offer to buy viewed as an aggressive form of posturing in a situation where his firm has less leverage; and Roth’s increasingly public statements about exiting the property seen as an attempt to force the Kushners to produce a financing plan.

Talks have become more frantic as the mortgage deadline approaches. Kushner purchased the building for a record-setting $1.8 billion immediately before the financial crisis and found itself facing steep debt payments. In 2011, Vornado was brought in as part of refinancing negotiations and was made a 49.5 percent owner of the property for $80 million and the assumption of half the debt.

For years, many have believed that Vornado, which operates Manhattan office properties and also owns much of the retail space at the foot of 666 Fifth, was interested in owning all the building. For that reason, when the company indicated in February it would be willing to sell its stake, some thought this was little more than a feint.

“We wonder if this isn’t just a negotiating tactic,” Alexander Goldfarb, senior analyst at Sandler O’Neill & Partners, wrote in a note in February. Vornado “has the financial sponsorship to get the debt holders to restructure.”