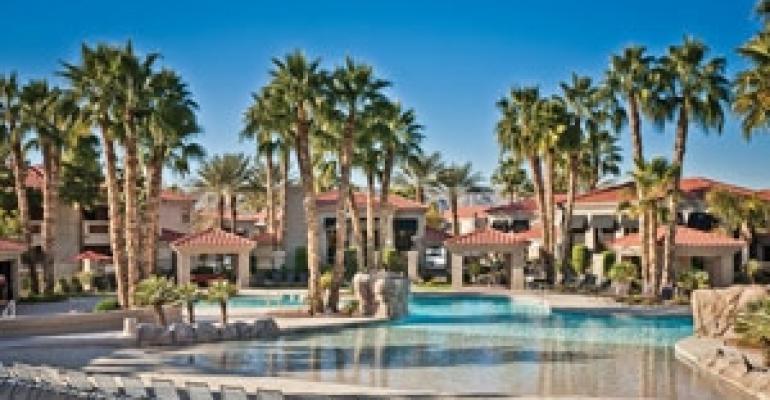 Close your eyes and think of Phoenix. If the image that comes to mind is street after street of empty, foreclosed homes, that’s understandable. Phoenix has been a starring city in the national housing crash and foreclosure crisis.

But Apartment Investment and Management Company (Aimco), based in Denver, Colo., sees something different. “Phoenix has been and continues to be a core market,” says Aimco’s Executive Vice President of Transactions John Bezzant. He points to strong job growth and strengthening occupancy rates for apartments. “We anticipate being in Phoenix for the long term.”

San Melia has great amenities, including a heated swimming pool with a sand beach and cabanas barbecue areas, a pair of sand volleyball courts and two spas. The apartments include nine-foot ceilings and balconies. “It’s just got very good bones,” Bezzant says of the property. “It fits very well into our class-B+ strategy.”

The property is also a short walk to shopping and amenities—unusual in a sprawling city like Phoenix. The apartments are next door to the Ahwatukee Foothills Towne Center, which includes a Sam’s Club grocery store, a Barnes & Noble Bookstore, banks, restaurants and many other shops. In fact, the rear wall of the shopping center is just a few feet from the property line.

The area is relatively wealthy—the average household income within three miles of San Melia is over $100,000 a year. San Melia is also less than a quarter mile from a freeway entrance and just three miles from the factory now under construction by computer chip maker Intel in Chandler, Ariz. “You can get to the airport in 15 minutes and to Intel in 10 [minutes],” says Bezzant.

The housing crash made Phoenix famous for its foreclosed homes. Foreclosures are still a problem there—actions, including notices of default, scheduled auctions or bank seizure, hit roughly one-in-300 housing units in Phoenix in April, according to data firm RealtyTrac. That frightens away some investors. “Phoenix is certainly not getting the level of attention that Manhattan or Seattle is getting,” says Bezzant.

Aimco back to bid

The San Melia Apartments is one of dozens of apartment properties that have traded hands in Phoenix since the beginning of the year at prices averaging roughly $60,000 per apartment. Average capitalization rates, which represent the operating income from a property as a percentage of the sales price, were 5.2 percent in the first quarter, down 120 basis points from the year before, according to data firm Real Capital Analytics.

Those sales include Scottsdale Gateway I & II in Tempe, Ariz., which Aimco sold in May for about $67,000 per apartment, according to data from Real Capital. Over the last two years, Aimco has sold eight properties totaling more than 600 apartments in and around Phoenix. According to Bezzant, the real estate investment trust is selling older, less valuable properties to focus instead on properties that earn 100 percent to 120 percent of the average market rent, like San Melia. In Phoenix, the average effective rent worked out to $701 a month in the first quarter, up from $689 the year before, according to Reis.

“This is a continuation of AIMCO’s strategy,” says Bezzant. “We started buying last year. We will be buying selectively over the foreseeable future.”