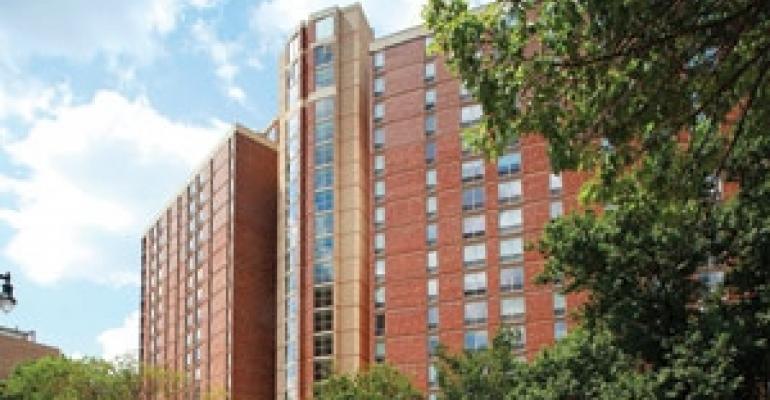 The Georgian, a pair of linked 16-story towers rising over downtown Silver Spring, Md., sold in a bankruptcy sale announced August 14. The property had been in receivership for nearly three years and bankruptcy for one year.

Pantzer Properties Inc., an investment company based in New York City, paid $168 million for the 891 apartments, plus 25,000 sq. ft. of retail space and 594 underground parking spaces.

“The Pantzer Team stepped into a very difficult transaction,” says William Roohan, vice chairman of CBRE, which helped negotiate the deal. “It was in bankruptcy with significant complications.” The biggest difficulty was probably the amount of debt on the propert —a total of about $215 million. That means lenders had to take a loss of almost $50 million.

Built in the late 1960s, The Georgian is described by Pantzer as “class-B+.” But in the last days before the financial collapse, investors spent millions to renovate The Georgian with finishes typical of a new class-A property. Sleek, stainless steel kitchens and a luxurious 24-hour fitness center gleam on The Georgian’s Web site. But despite the redevelopment, the property remains a 1960s apartment complex. “I think it's putting lipstick on a pig,” one resident said recently on Yelp.com, adding complaints of maintenance issues and the occasional cockroach.

“You can over-renovate,” says Grant Montgomery, senior vice president for Alexandria, Va.-based commercial real estate research firm Delta Associates Inc. No matter how much money a developer spends, a property that is a few decades old may never match the rents of a brand-new building, he says.

The former owners of The Georgian, New York City-based Stellar Management, celebrated its $35 million renovation with rooftop pool party in August 2009, including celebrated DJ Seyhan Duru and sushi served off the body of a female model, according to coverage and photos in local media. Montgomery County economic development officials praised the project as a perfect example of redevelopment.

The two towers will now go under the name The Point at Silver Spring, managed by Pantzer’s management affiliate, Panco Management Corporation.

The foreclosure sale is unusual for the metro area. “We are not seeing a lot of foreclosure rental apartment properties,” says Delta’s Montgomery. “Rents grew and that covered over a lot of problems that people had.”

However, rent growth in Silver Spring has been flat over the last year, according to Delta, which anticipates a slower rental market this year. “The frothy part of the market may be now or behind us,” says Montgomery.

Delta Associates cites slow growth in the federal government’s impact on the market or about 1 percent a year.

“We are used to 8 percent,” says Delta CEO Greg Leisch. “It’s certainly not the driving force it used to be. This is a very anemic expansion phase.”

Construction activity is also booming in metro area—developers started construction on a record-breaking 14,827 apartments in 2011, according to Delta. The percentage of vacant apartments at stabilized investment grade properties in the metro area inched up to 3.5 percent in the second quarter, up slightly from the year before, and may climb higher this year.

The cooling rental market may have encouraged The Georgian’s lenders to accept their losses.