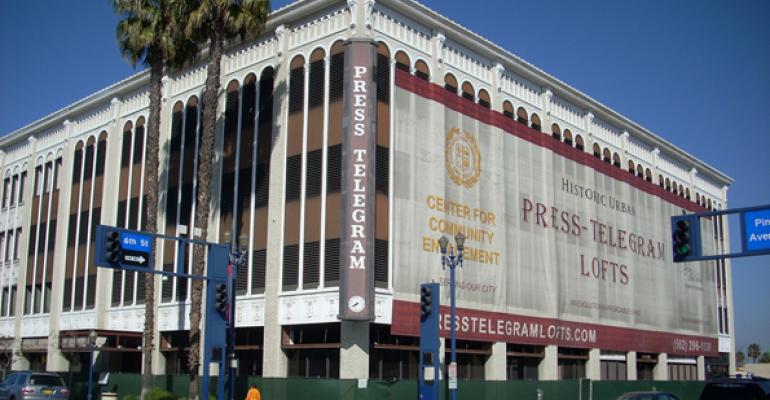 Located at the corner of Sixth Street and Pine Avenue in Long Beach, Calif., the 89,000-sq.-ft. Press-Telegram Building project includes the renovation of the exterior of the building, creation of a new plaza and landscaped pedestrian paseo, and tenant improvements on the interior.  The building’s new tenant, Molina Healthcare, is tentatively set to move into the office space in June 2013.

The project also includes the 119,000-sq.-ft. renovation of the historic Meeker-Baker Building, located in the same block at Seventh Street and Pine Avenue, which is scheduled for completion in fall 2014.

Renovations and improvements for the Meeker-Baker Building will include new construction and restoration of the existing façade of the building, per historic landmark requirements. A creatively landscaped outdoor plaza and pedestrian space will connect the two buildings housed within the city block.

The adaptive reuse project gives new life to the high-quality, but long-vacant buildings, and supports the city’s long-term redevelopment goals by placing approximately 1,000 permanent employees in a dense, walkable urban environment that includes numerous neighborhood shops and restaurants. Further supporting the city plan and to strongly encourage the use of the Metro rail and bicycle commuting, a minimum amount of parking has been planned for the site. Two Metro Blue Line stops are within a few blocks and the site will also feature a bike-share program.

Rockefeller Plaza Tower to Be Redeveloped Into Green Trophy Building

RXR Realty plans to complete a major capital improvement and renovation program at the iconic 75 Rockefeller Plaza, located in Rockefeller Center in the heart of Midtown Manhattan.

The comprehensive program will feature a new, modernized lobby and elevator cabs, and state-of-the-art building systems, along with added amenities including outdoor areas and green space, designed by the award-winning architecture firm Kohn Pedersen Fox Associates.  Construction is planned to commence in July 2014 and completed and ready for occupancy by fall 2015.

“We look forward to working closely with RXR Realty on bringing a newly renovated and rebranded, state-of-the-art, trophy building to Midtown Manhattan,” Mosler said in a statement.  “We’re excited to be involved in this once-in-a-lifetime opportunity and delighted to work with RXR to reintroduce this iconic building to the market.”

“The concept to build a brand new building within an existing shell is unique in its approach as it allows 75 Rockefeller Plaza to be restored with all of the 21st century office attributes while preserving its distinct characteristic as a Rockefeller Center landmark,” Stacom added in a statement.

When completed, the renovated building, with its classic limestone façade and a fully modernized interior, will feature over 620,000 sq. ft. of available office space and be tantamount to the first delivery of new construction in Rockefeller Center since 1947.

Originally named the Esso Building, the 33-story 75 Rockefeller Plaza was constructed in 1947 and stands at the north end of Rockefeller Plaza, bookending a classic corridor that includes 30 Rock, the International Building, the Shopping Concourse and the skating rink, which is home to the annual Christmas Tree lighting.

Consumers who purchase an electric vehicle will find that costs to own the vehicle are competitive with conventional and hybrid vehicles, according to an analysis conducted by the Electric Power Research Institute (EPRI). The study is based on pricing for the automotive products for the 2013 model year and compares the Chevrolet Volt and Nissan Leaf with gasoline-fueled cars that reflect average costs for different makes and models. Nissan lowered the price of the Leaf by about $6,000 in January. The study looks at several factors, including gasoline and power prices, incentives, financing, driving patterns and maintenance.

The cost advantage of plug-in electric vehicles (PEVs) increases as gasoline costs rise and decrease as they fall.  PEVs can still be competitive with lower gasoline costs, but payback will take a longer period. If a buyer finances a vehicle purchase, total monthly expenditures for all options will be within 15 percent of the conventional vehicle purchase, so buyers can reasonably make a purchase decision based on their personal preferences.

According to the report, lifetime costs for the Nissan Leaf are lower than that of the comparison vehicles.  However, the variation in costs is much higher for the Leaf than for the Volt—up to 30 percent of total costs. This variation means that while most drivers will benefit significantly from the Leaf potential buyers need to consider whether their driving needs are suited to the characteristics of a battery electric vehicle.

The study assesses both cash and financed purchases for electric, hybrid and conventional vehicles. The monthly outlay during the loan period is is a key indicator of affordability and may obscure the overall cost-competitiveness of vehicles for the life of the vehicle or the entire time of ownership.

The report also finds that lifetime costs for the Volt are close to the comparison conventional vehicle and comparison hybrid, indicating that increased upfront costs are offset by fuel savings. The variation in costs is relatively low between the best-matched and worst-matched, at about 5 percent. This makes the Volt a low-risk cost option for buyers interested in a PEV.

“Our analysis indicates that capital costs and operating costs are reasonably well balanced at the current time for most vehicle comparisons,” Mark Duvall, director of electric transportation research at EPRI, said in a statement. “Changes in the price of gasoline will affect this balance and will cause significant changes in payback time. Favorable state incentives or equivalent changes in capital costs for vehicles will have a larger impact than fuel prices, and will significantly improve payback time, total ownership cost, and monthly expenditure.”

The EPRI analysis focused on the Leaf and Volt because the two vehicles have been on the market the longest, have generated the greatest sales volume and provide data on real-world performance.