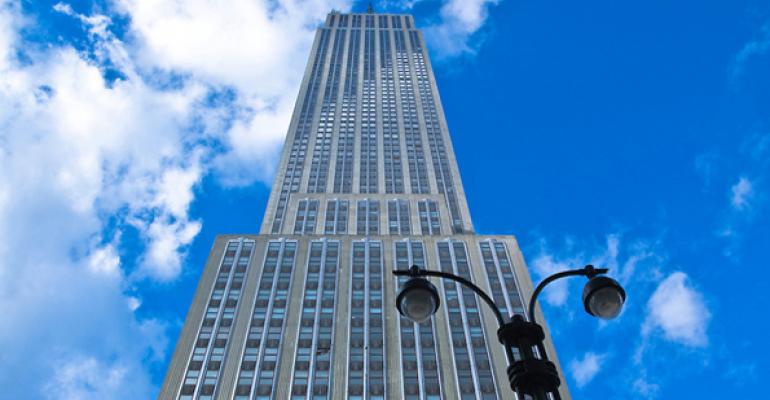 When Will Sustainability Matter to Investors as Much as Location and Quality?

Sustainable buildings result in lower operating costs, not to mention long-term savings as the cost of energy continues to rise. Many real estate scions are building green—think of the Durst Organization’s Bank of America Tower in New York City and One World Trade Center, which is being co-developed by Durst and the Port Authority of New York and New Jersey—as well as retrofitting green—most famously, Malkin Properties’ newly refurbished Empire State Building.

So it isn’t surprising that some investors and real estate firms are starting to focus on amassing green portfolios. But when will sustainability become as standard a criterion as location and quality in U.S. investors’ acquisitions? According to many within the industry, thanks to a growing awareness of green as well as several benchmarking programs, that day is almost here.

Many public pension funds and some private pension funds are interested in being environmentally responsible, says Real Capital Analytics Managing Director Dan Fasulo. But “the only real green buildings are brand new buildings built to the U.S. Green Buildings Council’s (USGBC) Leadership in Energy and Environmental Design (LEED) standards. While these buildings are becoming more common, especially in the major markets, it’s still very uncommon for them to be up for sale.”

For example, Fasulo says, New York’s Bank of America Tower is owned as a 50/50 joint venture between Bank of America and the Durst Organization. “It’s unlikely to come on the market for sale anytime soon,” he says. “The macro is, even if you raised money to buy green buildings, there’s nothing to buy—yet.”

But there are pressures to go green everywhere, which will increase the stock of sustainable buildings.

“Whether it’s economic or there is pressure from shareholders or a perception of green increasing productivity or the like, it seems there is still a consistent push to improve the efficiency of commercial buildings,” says David Pogue, the New York–based global sustainability director for CBRE Group Inc. “In certain markets, say, downtown Boston or Seattle, every high-quality building and virtually any new building is being built to the highest standards.”

Globally speaking, says Meredith Despins, vice president of investment affairs and investor education at NAREIT in Washington, D.C., “The environment social and governance issues are all top of mind [for] many investors.” However, she notes, in the U.S., only a few large public investors like the California State Teachers Retirement Systems are specifically targeting green investments at this point.

“It’s going to be a matter of evolution here in the United States as pension funds become more comfortable with how [sustainability] issues sit within their overall and long-term fiduciary responsibility to their plans and their participants,” Despins says. “That will happen as the green opportunity set matures here and there are more products with established track records for large institutions to look to.”

On a green mission

One investor that’s got a green investment thesis is 5 Stone Green Capital LLC, an organization founded in 2010 in New York City by Doug Lawrence and Lewis Jones, both former JP Morgan managing directors with 34 years of experience between them. The firm is on a mission not only to amass a green multifamily portfolio but to have a positive social impact.

“We have a very simple demographic model,” says Lawrence. “If there are going to be 9 billion people on the planet in 2050, you’ve got to feed them, house them, find them work and they’re going to need more energy.”

5 Stone targets investors who have an interest in green projects and products, including large and small companies, endowments and foundations. “We’ve identified broadly what we call ‘impact investors’—it’s a whole category that we want to tap into,” says Jones.

The firm’s mission is to provide a “triple bottom line” to its investors, says Lawrence. “Our investment thesis provides immediate value creation—by our energy efficiency, sustainable design, lower consumption levels of energy and use of technology, we reduce operating expenses and capital expenditures.”

To that end, 5 Stone identifies opportunities by looking at income density per square mile, sustainability rankings and retail leakage. The firm currently has four projects in production, including a prototype to address homelessness for U.S. veterans based on five drivers: lack of affordable housing, inadequate support services, lack of savings, poor health and joblessness.

The project, to be built in Salem, Va., incorporates green, energy-efficient housing; a therapeutic work environment at an adjacent enclosed, year-round, green-designed hydroponic farm; and social services such as job and financial training.

5 Stone’s proposal for the facility was selected by the U.S. Deptartment of Veterans Affairs out of 299 entries for a $6.8 million award. The project was also named as a 2012 urban design award finalist by Switzerland’s Katerva Institute, dedicated to promoting sustainability concepts.

“We believe that markets will differentiate in terms of valuation between energy-efficient buildings and energy guzzlers. The latter will be penalized, the former category will be rewarded,” says Jones. “So as prudent investors, we believe you are helping inoculate yourself from the risk of technological obsolescence [by investing in green buildings] and regulatory risk.”

But 5 Stone isn’t limiting its marketing to green-leaning organizations. “We hope that investors will believe in addition and subtraction, division and multiplication—we can go right to the bottom line and talk about the immediate impact of the strategy in terms of value creation.”

Jones’s contentions are backed up by a study published in 2011 conducted by the University of San Diego of 147 CBRE Group Inc.–managed office buildings nationwide in 2009 and 2010. The research showed an increased demand for and value of green amenities, LEED-certified buildings and a continually improving Energy Star average score, says CBRE’s Pogue.

The surveyed buildings, located in Boston, Chicago, Dallas, Denver, Houston, San Francisco, Seattle, Southern California and Washington, D.C., had above-market occupancy and rental rates and an average reduction in energy costs of 21 percent. And, reports the study, despite the economic downturn impacting building owners’ commitment to green, CBRE’s sustainable buildings still outperformed those of the general market in 2011.

Bring on the benchmarks

Early on in the USGBC’s LEED rating program, launched in 1998, “investors were seeking so-called green funds,” says Gary Holtzer, global sustainability officer with global real estate firm Hines, “Now it is generally accepted that development will be green and that the best-in-class managers will pursue a sustainable course. The good news is that sustainability is increasingly becoming a baseline, and those that do not pursue this path will suffer a ‘brown discount.’”

Europe’s Global Real Estate Sustainability Benchmark (GRESB) rating system is also pushing investors toward green buildings. The system is used by investors to determine the sustainability of properties they are acquiring. An external group rates the funds for potential investors.

“At the bottom level, you’re being required to demonstrate your energy efficiency in the marketplace and at the top level funds are being evaluated based on a number of characteristics, so building users are seeing the push toward sustainability from both sides,” Pogue says. “Do users care about this? More and more we’re seeing this is true.”

At press time, yet another benchmark, the FTSE NAREIT USGBC Green Real Estate Index, was about to be launched. The product of collaboration between the economic indexing firm FTSE Group, NAREIT and the USGBC, the indices, which so far include 78 publicly traded REITs, will provide investors with a credible set of criteria for identifying an environmentally responsible property using constantly updated data that goes back to 2008. The methodology utilizes both LEED and Energy Star designations. All information is validated by a third party.

“The idea is that investors want a way to invest not just in companies that have great reputations but in companies whose returns are going to reflect the returns of green properties in the real estate situation,” says Brad Case, NAREIT’s senior vice president of research and industry information. “The criteria are at the property level—we’re not identifying certain companies as green companies.”

“It’s not magic, it makes perfect sense,” says Case. “Companies are willing to pay more to be in a green property and are more likely to snap up the space in green properties. In turn, the properties have better operating costs and are worth more because they’re green certified. So investors can participate in that improvement of operating performance by investing in companies that are taking their portfolios through the green certification process.”

The shift toward sustainability began in earnest with the Government Services Administration (GSA) requiring LEED Silver certification for all new construction federal lease properties of more than 10,000 sq. ft. In 2011, the GSA upped its requirements by requiring projects funded prior to 2010 to be LEED Gold certified. With a portfolio of over 361 million sq. ft. of space in 9,600 federally owned and leased facilities, according to the GSA Web site, the GSA has significantly influenced the trend toward LEED.

“The GSA was an important early adopter because, with very long-term occupants toward perpetuity, this was a pretty big demonstration of what LEED can do,” says David Lynn, executive vice president and chief investment strategist with Cole Real Estate Investments. “But I don’t think the demonstration factor is so important anymore. I think everyone has got religion at this point. People thought it wouldn’t catch on in triple net lease buildings, but it’s even catching on there, too. Major investors see LEED as the future going forward.”

Today the drive toward green investment is being driven largely by multinational corporations, says Dan Probst, Jones Lang LaSalle’s chairman of energy and sustainability services and a founding member of its global environmental sustainability board. He says JLL’s large corporate clients—such as Bank of America, Proctor & Gamble, HSBC and Yahoo—“are very progressive on the environmental front; they’ve had strong focus for a long time on improving the buildings that they own and in which they house their employees.”

JLL’s other clients—investor-owners focusing on the office sector—were slower to focus on environmental performance, but are shifting toward green buildings due to tenant demand. JLL has implemented green initiatives for such iconic buildings as the Empire State Building, Chicago’s Union Station and Miami Tower.

“These same companies who have aggressive environmental goals are now pushing what they’ve been doing in their own buildings into their leased portfolios as well, making bigger demands of their investor-owners,” Probst says. That includes adding environmental criteria to their RFIs and RFPs when they’re shopping for space.

If clients are looking to lease space, says Probst, “and they’ve narrowed it down to three to four buildings, location and economics and all the classic real estate criteria are still high on the list, but now sustainability performance and energy performance are on that list—and they weren’t before.”

Five years ago, there were no green buildings in CBRE’s portfolio, notes Pogue. CBRE currently has approximately 260 million sq. ft. of its 300 million-sq.-ft. portfolio of U.S. office space benchmarked to Energy Star. Of those 1,400 buildings, 320 have performance scores qualifying them to as Energy Star–labeled buildings and 180 are in the process of qualifying. CBRE also manages more than 200 U.S. buildings that are LEED Silver or LEED Gold certified; CBRE also has 60 buildings in the process of LEED certification.

“We represent some of the biggest institutional owners and they are supporting sustainability efforts, including getting the LEED EB certification, for a variety of reasons,” Pogue says.