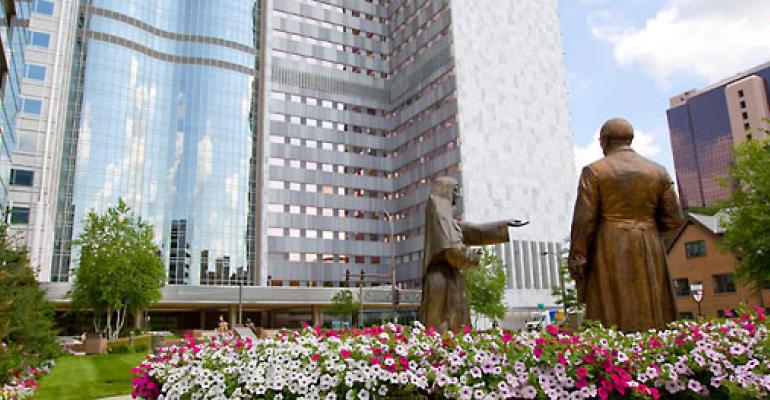 A spokeswoman for Mayo said the clinic was "incredibly pleased" with the level of private investment around the city.

The developer behind a stalled $220 million hotel project in downtown Rochester is laying the blame on Mayo Clinic for throwing that deal into limbo.

Minnesota Public Radio reports on the latest drama from Rochester's Destination Medical Center, in the wake of the apparent demise of an ambitious, two-tower plan that included a luxury hotel and apartments by Bloom Holding. Bloom, a United Arab Emirates developer that had been planning the towers for years, recently missed a key deadline so Destination Medical Center economic development project officials decided to move on. City officials will likely reopen the site for new proposals.

Bloom says that its hand was forced by Mayo Clinic's decision to pair up with Pontiac Land Group, a Singapore developer, to add an upscale hotel on top of the clinic-owned Gonda Building. In a letter, Bloom said it was "blindsided" by that deal, which would "create a considerable competitive disadvantage for our project." Both Bloom and the Mayo/Pontiac partnership would presumably be pursuing the same clientle: Rich people headed to the clinic for treatment.

A spokeswoman for Mayo said the clinic was "incredibly pleased" with the level of private investment around the city.

Rochester has about 5,300 hotel rooms now, with more coming online as the city invests in its multibillion-dollar Destination Medical Center project. A 19-story, 264-room Hilton hotel is also being built nearby,

Bloom may not be out of the picture altogether, though. It says it's still interested in building in Rochester and may try to collaborate with Pontiac on a single luxury hotel.