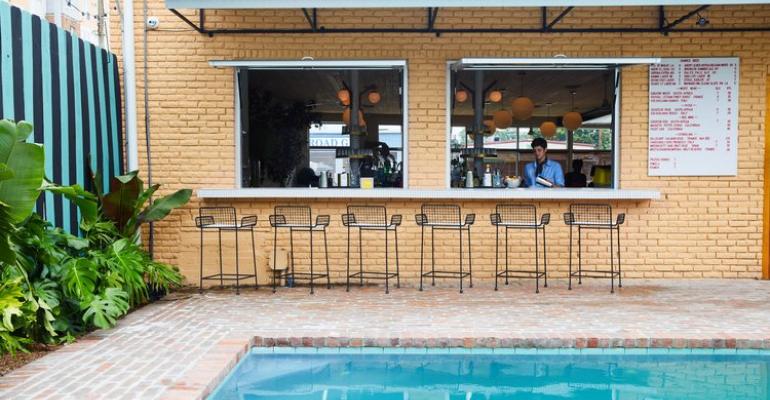 You’d Never Know These Gorgeous Hotels Were Once Ugly Motels

(Bloomberg)—Hotel design is often a process of addition, whether it’s that perfect throw pillow, location-specific coffee table books, or a splash of texture on an accent wall.

Not when you’re gutting a shabby 1930s motel. “Most of our design process was about subtraction,” said Liz Lambert, founder of the Austin-based Bunkhouse Group, which in March unveiled its overhaul of the aged Austin Motel. “[We had to] peel away layers of garden gnomes and tchotchkes that accumulated over time.” Now the derelict inn is a cool-kid magnet—just like its sister hotel, the celebrity-packed Saint Cecilia.

Around the U.S., hoteliers are turning down-at-the-heels motels—a national icon of sorts—into stylish, remarkably upscale hotels. The trend started a decade ago, according to Mike Cahill, founder and chief executive officer of hospitality real estate firm HREC Investment Advisors. But it has spread in the past couple of years, spurred by affordable property prices and a changing definition of luxury that puts more emphasis on character and experiences than thread counts and square footage.

That doesn’t make the business of motels a sudden no-brainer. Small properties like these often operate on tight margins. They don’t benefit from economies of scale in everything from marketing, to accounting, to linens, the way chains and large hotels do. (Marriott CEO Arne Sorenson has said these sorts of cost savings drove the Starwood merger last year.) In booming areas, it can be more cost effective to tear down motels and build something larger from scratch.

Cheap real estate can also translate to costly, time-consuming, and controversial renovations—the buildings are often seen as part of a community’s local legacy. “[Renovating a motel] takes a lot of empathy. It is much easier to develop a hotel in Manhattan,” said Erik Warner, co-founder of Eagle Point Hotel Partners, which this year converted motels in Jackson Hole, Wyo., and Greenport, N.Y. Plus, explained Lambert, “you never know what you are going to find behind the walls. It’s easy to come in and decorate, but much harder when you discover the pipes are bad.”

So why bother? For Lambert and several others, the challenges are worth the reward of creating a noteworthy hotel, contributing to the rebirth of an area, and hopefully profiting as a result. “It’s like the ultimate in recycling,” Cahill said.

They’re a boon for travelers, too, at price points that often dwarf the branded big boxes nearby. Here are the standouts to book on your next great (road) trip.

For years, hotelier Liz Lambert had a crush on the 30s-era Austin Motel, an icon of the city’s restaurant-packed South Congress Avenue—thanks in no small part to its phallic neon sign. Now, after her year-long makeover, the 41-room property marries minimalism with bursts of color and kitsch—lip-shaped telephones, colorful Voutsa wallpaper patterns, and synchronized swimming performances for poolside entertainment. “I think we preserved the spirit of the place,” Lambert said. “And of course, we kept the sign. I mean, that sign may be the No. 1 reason I wanted the hotel all these years.” From $125.

It wasn't the dated decor of the Casa Malibu Inn that prompted Oracle founder Larry Ellison to pay $20 million for it—the motel was built right on coveted Carbon Beach. (It’s also called “Billionaire’s Beach,” thanks to the extravagant homes abutting it.) After a total reinvention, the hotel reopened in June as part of Japanese chef Nobu Matsuhisa’s fast-growing brand, with just 16 individually designed rooms. The style is refined and organic, with teak paneling, concrete fireplaces, handmade teak soaking tubs, and linen-hued upholstery. There is a shared ipe wood deck and an oceanfront lap pool; the interior garden is done in traditional Japanese style. And to compensate for the lack of a restaurant on site, guests can order room service from Nobu’s high-end sushi spot two doors down. From $1,500.

“We had this dream to transform [the Drifter] into a destination,” said co-owner Jayson Seidman, whose once-shabby 1956 motel is set in an unlikely area—an up-and-coming, industrial stretch of Mid-City once known as a hotbed of drugs and prostitution. To make it happen, he and his co-owners turned the parking lot into a tropical garden, removed the dirt that used to fill the swimming pool, and added a lounge and coffee bar. The casual-cool result was launched this summer, with yoga classes in the morning and a buzzy cocktail hour scene. The rooms are simple, with gray walls and upholstery and honey-toned wood headboards. Said Seidman, “We’re playing the high-low game—we are a 1950s motel, but we have Aesop toiletries and really nice linens.” From $175.

The pocket-size Brentwood isn’t in the fancier part of this upstate resort town—best known for hosting the annual Travers Stakes horse race. Instead, it’s among the stables behind the back stretch of the Saratoga Race Course—and that’s part of the appeal.  “In the mornings you can sit there with a coffee and see all the horses walk down the street,” said Jou-Yie Chou, partner at Brooklyn-based Studio Tack, who transformed the run-down motor lodge into an elegant retreat with reclaimed white-oak flooring, high-shine black wainscoting, vintage oil paintings, and an intimate Carrara marble-topped lobby bar. “We wanted it to be handsome,” Chou said, “not kitsch or cute.” From $139.

It was supposed to be a lipstick renovation. But after new owners took over the Shell Motel, a half-block off the beach in Fort Lauderdale, they decided otherwise. “We gutted it,” said Pawel Plata, co-founder and manager of the Gzella Collection—which now includes three converted motels along a burgeoning corridor of the South Florida coast. With designer Blanche Garcia (of Travel Channel’s Hotel Impossible fame), they replaced the Elita’s wan yellow exterior with a graphic black-and-white facade. Out went brown tiled showers and pastel parrot prints; in came tinted glass bathroom doors and serene gray walls. But the highlight of the hotel, which opened in mid-2016, is the enclosed modern garden and pool. “It’s just our oasis,” Plata said. From $134.

At the Anvil, even the bed frames make a statement. “They are a reflection not just of the fact that wrought-iron beds were a luxury in Jackson a hundred years ago,” said Warner; they also pay homage to the ruggedness of this ski resort-cum-cowboy town. Other statements at this new ski town bolt hole: a beverage program by New York cocktail outfit Death & Co., a trattoria led by Pok Pok alum Troy Furuta, and a top-notch concierge program that focuses on the local community. “We’re spending a lot of time and resources to find that man or woman who can, say, take you into the Tetons under the pines … the float company that takes you to a private ranch to sit around a table with locals,” said Warner. From $195.

Once you’ve been to Prince Edward County, it’s hard not to go back: it has dozens of excellent wineries, Caribbean-like beaches, and tons of charming boutiques and restaurants, all within an easy drive of Toronto or Montreal. But it has little in the way of great hotels. So when a couple of Toronto friends came upon the “dingy” but structurally midcentury Sportsman Motel, they saw great potential. “Despite the popularity of the area, everyone seemed to struggle to find a place to stay,” said co-owner April Brown. Now the 16-room property is an eclectic, boho-chic spot, with pink doors, Solair chairs, and a Rosé Suite plastered in floral wallpaper, midway between the mysterious (but beautiful) Lake on the Mountain and the blink-and-you-miss-it town of Picton. From $119.

At this new gem on Long Island’s North Fork, the shore is the star—all the Sound View’s 55 rooms open onto a private, quarter-mile-long beach. Built in 1953 and redone by Eagle Point this year, the rooms now feature shiplap cedar walls, Waterworks bathroom fixtures, rope rugs, and colorblocked quilts from Brooklyn’s Quiet Town Home. The seafood-focused restaurant, Halyard, is overseen by James Beard-winning chef Galen Zamarra. Order the lobster beignets and the clams, fried in a buttermilk-saltines batter. From $205.