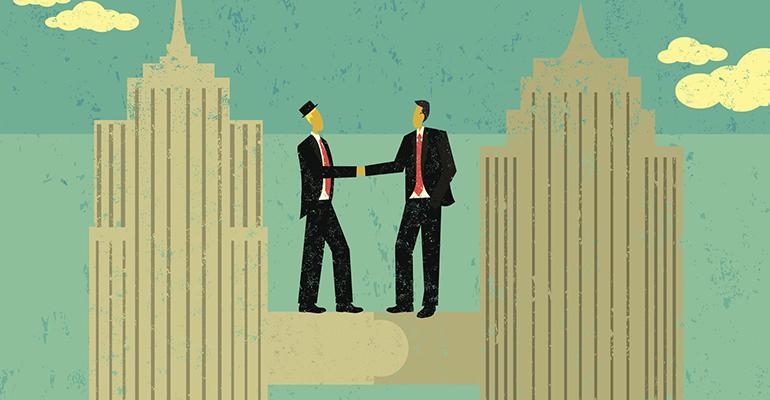 Some observers say the deal could be the start of a tidal wave of M&A activity in the industrial REIT sector.

If Prologis Inc.’s proposed $8.4 billion acquisition of smaller rival DCT Industrial Trust Inc. goes through, it’ll create an industrial REIT with 71 million sq. ft. of existing and planned warehouses and distribution centers. Some observers say the deal could be the start of a tidal wave of M&A activity in the industrial REIT sector, yet others believe the Prologis-DCT combo will trigger more of an M&A ripple.

John Guinee, managing director at St. Louis-based brokerage firm Stifel Nicolaus & Co. Inc., who tracks REITs, says he’d be “astounded” if the six publicly-traded industrial REITs he covers aside from San Francisco-based Prologis and Denver-based DCT weren’t involved in a merger or go-private deal before the end of 2018.

“All the other industrial REITs now have a target on their back,” Guinee says.

In effect, industrial REITs Duke Realty Corp., EastGroup Properties Inc., First Industrial Realty Trust Inc., Liberty Property Trust, Rexford Industrial Realty Inc. and Terreno Realty Corp. are all up for sale now, he says. By the end of this year, Guinee expects each of those REITs to receive an active or passive offer—either welcomed or hostile—to combine with another REIT or to be snapped up by an equity heavyweight like Apollo Global Management LLC, BlackRock Inc. or Blackstone Group LP.

Industrial REITs are particularly attractive now in light of relative weakness in the office and retail REIT sectors, Guinee says. Industrial has been one of the star performers among REITs, with a total return of nearly 20.6 percent for 14 industrial REITs in 2017 and an occupancy rate around 95 percent, according to industry group Nareit.

Matt Kopsky, a REIT analyst at Des Peres, Mo.-based brokerage firm Edward Jones, says the Prologis-DCT deal is positive for the industrial REIT sector and acknowledges the heightened M&A potential for industrial REITs. However, he doesn’t think the deal will lead to a significant change in industrial M&As.

For one thing, Prologis, the largest prospective buyer among publicly-traded industrial REITs, is now on the acquisition sidelines due to the DCT deal, according to Kopsky.

In addition, New York City-based Blackstone, one of the largest privately-held owners of industrial properties in the U.S., added to its industrial portfolio by purchasing Vancouver, Canada-based Pure Industrial Real Estate Trust in January 2018 for $3.8 billion and the industrial assets of Boston-based real estate investment firm Cabot Properties Inc. in December 2017 for $1.8 billion.

“Certainly, Blackstone could do more deals, and last year Saudi Arabia committed $20 billion to a Blackstone-managed infrastructure fund,” Kopsky says. “But one would think that you can only hit the gas so hard.”

Meanwhile, executives at Duke Realty, the second largest publicly-traded industrial REIT, have repeatedly said the acquisition market is quite competitive, making it difficult to find appropriate risk-adjusted returns, he adds.

Kopsky notes that the only industrial REITs that Indianapolis-based Duke might be interested in purchasing are Los Angeles-based Rexford and San Francisco-based Terreno. But he says he’d be shocked if Duke acquired them, given their high valuations.

As for Duke itself being an acquisition target, Kopsky notes it’s too large for a private buyer to swallow, except perhaps Blackstone. But Blackstone already has spent more than $5 billion in recent months to scoop up industrial properties, which would greatly decrease any appetite it might have for Duke.

What about Rexford or Terreno going after a lesser-quality industrial portfolio? The analyst dismisses this possibility, as both REITs focus on top-tier markets, and they wouldn’t want to buy a portfolio only to end up shedding assets that are outside their strategic markets.

“Substantial private capital has been raised with a limited number of attractive real estate sectors in which to deploy that capital,” he notes.

But taking into account the industrial REITs’ healthy balance sheets and easy access to capital, combined with the positive outlook for the sector, premiums for M&As involving the REITs would need to be high, he adds.

Fundamentally, Rodgers thinks the Prologis-DCT deal will neither help nor hurt the industrial REIT sector.

“The sector is highly-fragmented, and right now is operating in a very disciplined fashion,” he says. “Overall, we remain positive on industrial. With an all-time low vacancy rate and continuing strong demand—particularly from e-commerce and same-day-delivery efforts—we expect embedded rent growth and additional market rent increases to support both core portfolio growth, as well as high returns on new construction projects over the next several years.”

Overall, the Prologis-DCT deal signals confidence in the industrial sector’s underlying fundamentals and highlights robust investor demand for industrial assets, considering that both companies were trading at NAV premiums when the acquisition was announced, according to Eric Frankel, a REIT analyst at Newport Beach, Calif.-based research and advisory firm Green Street Advisors. Thanks to the ongoing optimism about the sector, other large industrial portfolios will probably sell at healthy premiums, Frankel notes.