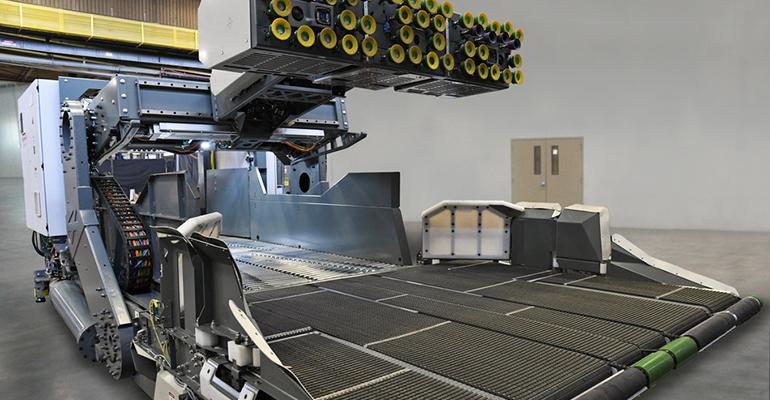 Siemens AG and Honeywell International have built robots that pull packages from the back of tractor-trailers and put them on conveyor belts.

(Bloomberg)—As FedEx Corp. and United Parcel Service Inc. beef up automation to keep pace with surging e-commerce and a potential threat from Amazon.com Inc., they’ve been stumped at a crucial stage: loading and unloading trucks.

Robot makers are getting close to solving part of that puzzle.

Siemens AG and Honeywell International Inc. have built machines that pull packages from the back of a tractor-trailer and place them on conveyor belts, whizzing the parcels off for sorting. Making robots that can load trucks is more complicated, although clearing that hurdle isn’t far off.

“The biggest challenge in our world is: Every single package is different in size, shape, weight, color, material,” said Ted Dengel, managing director of operations technology at FedEx’s ground-delivery unit. “It makes it a very tricky problem.”

The devices, unveiled at a recent automation conference in Chicago, hold out the promise of increasing productivity while reducing the need for one of the most grueling jobs in logistics. Couriers are relying on automation to grapple with the rise of online shopping, which is fueling record demand but pressuring profit margins. Amazon’s plan to handle more of its own shipping and offer more one-day deliveries is only upping the ante.

Automated unloaders took years to develop and still haven’t been perfected, reflecting the difficulty of working with an array of packages that are stacked differently from truck to truck. The machines also need space within logistics hubs and warehouses that already are packed with equipment. The Siemens contraption requires modification of a truck’s trailer. Honeywell’s doesn’t, but isn’t as fast at unloading.

Honeywell’s apparatus is a behemoth on wheels that has a bank of suction cups to grab packages stacked high. A portable conveyor catches or scoops them up from the trailer bed. It works in most flat-floored trailers and unloads as fast as a person can -- but without the back pain and exhaustion.

“I can speak from first-hand experience from developing this machine: The job is miserable inside that trailer,” said Matt Wicks, vice president of product development at Honeywell’s Intelligrated unit, which focuses on warehouse automation. “Getting people out of the trailer and on the dock side managing several of these machines is a huge factor as it relates to employee satisfaction and retention.”

Siemens took a different approach. A rolling belt must be permanently installed on the truck trailer’s floor with packages loaded on top. When the trailer is at the loading dock, a large machine is attached to the belt and packages are pulled in and sent to the sorting hub. Unloading a standard trailer takes about 10 minutes, compared with approximately an hour for one person moving the boxes.

FedEx began searching six years ago for ways to automate trailer unloading and recently began testing two competing machines, said Dengel, the operations-technology director. One device is further along, and FedEx plans to buy two of that model and start using them in the field over the next year, he said. He declined to name the manufacturers that the Memphis, Tennessee-based company is working with.

UPS also is working to automate unloading, spokesman Glenn Zaccara said, declining to provide details. The Atlanta-based courier is in the middle of a three-year, $20 billion technological makeover to keep pace with online retail growth. Over the last five years, the company’s union workforce has increased 14 percent because of rising package volume, Zaccara said by email.

Solving the three-dimensional puzzle of loading a trailer is tougher than for unloading one. Yet Dorabot, which has backing from Chinese e-commerce titan Jack Ma, is testing automated loading technology with two customers.

The startup’s robots use artificial intelligence and can load 400 parcels an hour into a trailer, filling 60 percent of its capacity -- in line with what a person can do -- said Chief Executive Officer Spencer Deng. Dorabot expects to improve speed by about 50 parcels an hour, and fill 80 percent of a truck’s capacity, before going to market within a year and a half, Deng said.

To contact the author of this story: Thomas Black in Dallas at [email protected]