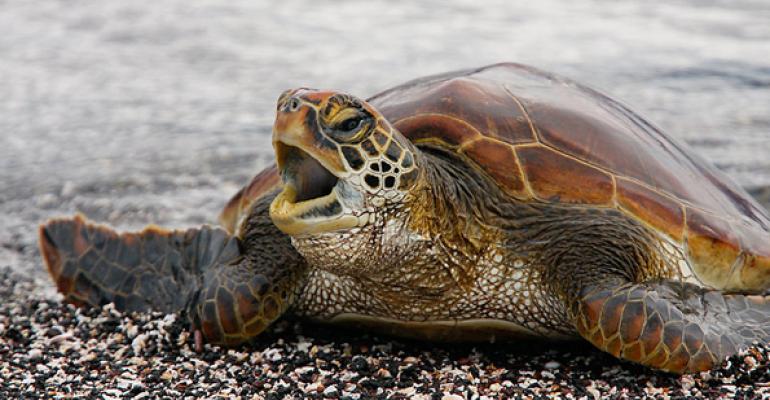 Demand for industrial real estate registered a marked pullback, associated with a sharp drop in new construction during the first quarter of 2015. A combination of weak economic activity and inclement weather interrupted the steep rise in net absorption and completions evident throughout 2014. Just as industrial real estate activity slowed in response to weak GDP growth in early 2014, early 2015 results appear to be following a similar path.

Net absorption of warehouse/distribution space totaled 16.3 million sq. ft. in the first quarter, a decline of close to 40 percent from the previous three months. This was on par with net absorption from the first quarter of 2014, when weak economic growth and inclement weather also impacted results. Completions fell even further; first quarter deliveries totaled 9.4 million sq. ft., a 61.0 percent drop from the previous period. A drop-off in construction between the fourth and first quarters is not surprising as completions tend to increase in the latter portion of the year. Yet this decline was particularly pronounced. After rising to a post-recession high in the final three months of 2014, first quarter deliveries were at the lowest level observed since the second quarter of 2013.

National vacancy declined 20 basis points to 11.0 percent due to the outsized fall in supply growth. This is the largest quarterly decline since the second quarter of 2014 and marks a 12-month fall in vacancy of 50 basis points. A large influx of new supply will likely diminish any near-term occupancy gains. Nevertheless, vacancy is now 320 basis points below its cyclical high, achieved in 2010.

Notwithstanding the disappointing headline figures, there was a silver lining evident in this quarter’s results. Net absorption has tracked new construction closely since the beginning of 2014, so it is not a surprise that the precipitous fall in completions was accompanied by a steep drop in net absorption.

However, the gap between the two figures (6.9 million sq. ft.) was at its highest since the second quarter of last year. During the current recovery, demand for large, high-quality product has been especially strong and resulted in tightness at the high end of the market. It is this dynamic that has driven the acceleration in warehouse and distribution construction over the past year. But only if more existing product leases up will we observe larger declines in the vacancy rate. The fact that demand growth held up better than supply is a positive sign for out-of-favor portions of the market.

Quarterly rent growth slowed from the previous period. Both asking and effective rents registered increases of 0.4 percent over the past three months, down from 0.6 percent and 0.9 percent, respectively, observed in the fourth quarter of 2014. This rate of growth was in line with results from the first quarter of 2014, when a backdrop of slow economic growth dampened demand. Acceleration in annual rent growth stalled; asking and effective rents were up 2.3 percent and 2.8 percent, respectively, year-over-year, the same as last quarter. 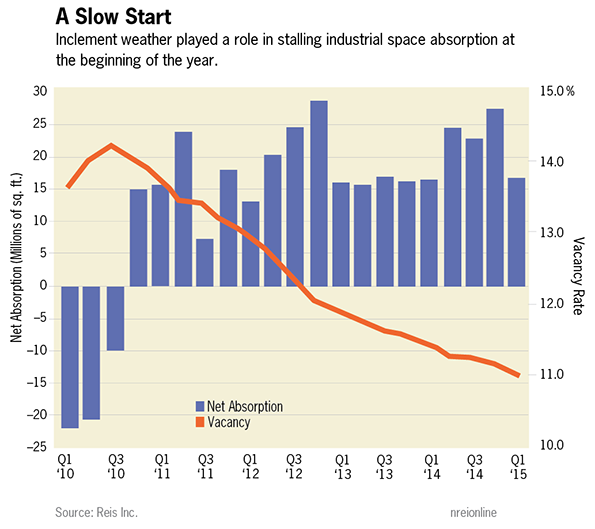 Rent growth subdued across the country

While the level of activity may have slowed across the country, the recovery in the industrial sector remains broad-based. Effective rent was up in all 47 primary industrial markets (combined warehouse/distribution and flex/R&D) across the country for the third quarter in a row. Net absorption was positive or flat in 42 markets for the second consecutive quarter. Moreover, the slowdown in supply growth helped support occupancy increases in all but 10 markets. Completions topped 1.0 million sq. ft. in just three markets: Dallas, Houston and Central New Jersey. Dallas remained the top market for construction activity with 1.9 million sq. ft. delivered, bringing its total for the past 12 months to 10.7 million sq. ft.

The largest warehouse/distribution markets have outperformed during the recovery, but some smaller markets were at the forefront this quarter. Only two of the top ten metros ranked by quarterly rent growth, Los Angeles (+0.8 percent) and Atlanta (+0.6 percent), would be considered among the largest markets in the country. Meanwhile, metros such as Columbus (+1.3 percent), Kansas City (+1.0 percent), San Jose (+0.8 percent), Orlando (+0.7 percent) and Jacksonville (+0.6 percent) outperformed. However, this was largely due to depressed rent growth across most of the nation as opposed to an acceleration in the recovery of smaller industrial markets. Whereas eleven different metros registered quarterly rent growth above 1.0 percent in the last three months of 2014, only two metros broke that mark in the first quarter of 2015.

This quarter’s metro findings may have strayed from recent trends, but annual effective rent growth rankings remain dominated by the largest markets. Los Angeles (+4.7 percent), Houston (+3.8 percent), Chicago (+3.8 percent) and Dallas (+3.7 percent) are all among the top six, rounded out by Kansas City (+4.6 percent) and Memphis (+4.0 percent). 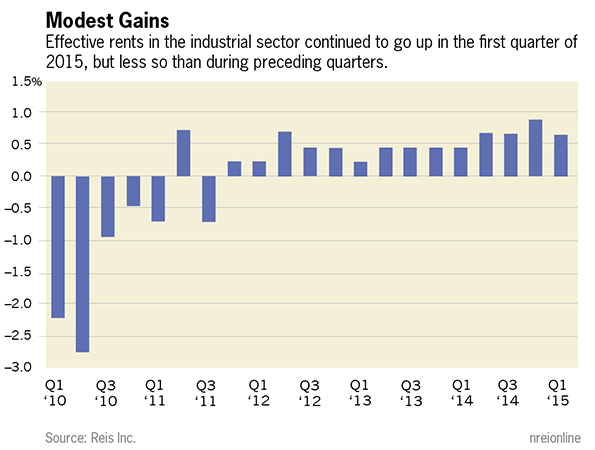 Recent weakness will not derail the recovery

Although recent economic growth has been sluggish, we need look no further than one year ago as a reminder that the current economic recovery, though strengthening, is not without its fits and starts. We still expect average monthly job increases above 250,000 and decent economic growth for the remainder of the year. Most major risks continue to stem from our trade partners, which would impact those industrial markets situated near ports and reliant on international trade. Nonetheless, we believe domestic demand will remain strong enough tosupport the growing need for industrial space.

Somewhat disappointing first quarter results have not caused any substantive changes to our outlook for the property type. Within the warehouse/distribution subsector, the large drop in construction activity during the first quarter just means that more completion dates will be pushed into the final three quarters of the year. Vacancy compression will likely slow over 2015, but demand for new product is sufficiently high to absorb the influx of new supply and support an accelerating rise in rents.