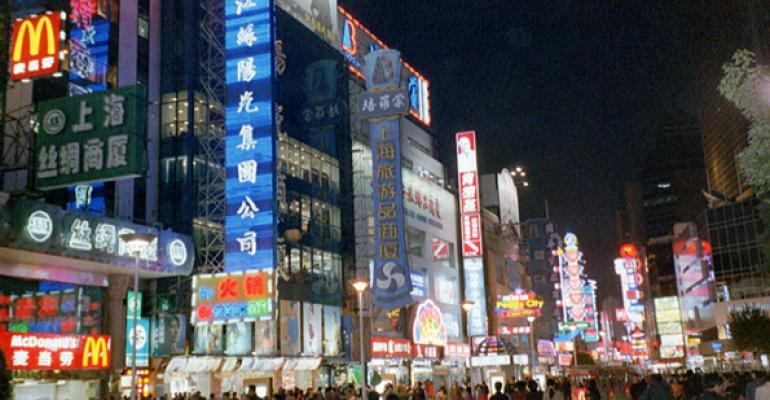 Shanghai is emerging as a top retail destination in China and across Southeast Asia.

“Shanghai is the gateway to the China market for retailers given the city’s international presence and social structure,” says Eugene Tang, regional director and head of retail for Shanghai and Greater China at Jones Lang LaSalle in Shanghai.

Shanghai has one of the largest urban populations in the world with more than 23 million residents. The city also is evolving into an international center for business and finance, which is helping to fuel a strong economy. Shanghai is home to the largest working population and ranks as the wealthiest city in China. According to Jones Lang LaSalle, per capita annual incomes average US $15,000 per year and disposable income is at $5,000 per year, he adds.

Given that backdrop, it is no surprise that Shanghai’s retail market has experienced a building boom in recent years. The current retail universe in Shanghai spans some 43.1 million sq. ft., including 34.4 million sq. ft. of shopping mall space and about 8.6 million sq. ft. of department stores, according to Cushman & Wakefield. Shanghai’s retail market has been experiencing robust demand. New additions during the first half of the year include a new two-story flagship store at Yifeng Tower for Gucci. Marks & Spencer also opened its largest store in China to date with a new 45,208-sq.-ft. store in Golden Bell Plaza.

In particular, the most active segment of the market is coming from luxury brands such as Gucci and fast-fashion brands such as Uniqlo and Gap. “With rapidly increasing incomes, consumers have become more sophisticated and discriminating in the brands that they purchase,” says Sigrid Zialcita, managing director of research for Asia Pacific at Cushman & Wakefield. “People now care more about qualities such as design concepts, customer service, and shopping environment,” she says.

For example, three new shopping centers that were completed during the first half of the year include Park Place Reel on West Nanjing Road, Yifeng Tower in the Bund and Bailian Xuhui Shopping Center in Xujianhui.

One submarket that has typically attracted a high volume of shoppers and their shopping dollars is Zhongshan Park. Earlier this year, American retailer Ashley Furniture moved into a 35,521-sq.-ft. store formerly occupied by Best Buy. In addition, Suning’s 269,000-sq.-ft. store was vacated to make way for Japan-based Gloria Department Store. Hua Ning Plaza and the 1.29 million-sq.-ft. Raffles City, which are scheduled to open in the third quarter of 2012 and the first quarter of 2015 respectively, will provide even more expansion opportunities for international retailers in this submarket, adds Zialcita.

Currently, the vacancy rate for mid-priced shopping centers in prime submarkets that include East Nanjing, West Nanjing, Middle Huaihai, Xujiahui and Lujiazui is at an ultra-low 4.2 percent. Cushman & Wakefield estimates that even with a delivery of 11.84 million sq. ft., using a conservative scenario of 80 percent occupancy rate upon delivery, the vacancy rate stands to rise to 11 percent. That is still a relatively low level, notes Zialcita. “As such, the current level of projects under construction will not cause a severe imbalance in the retail sector,” she says.

One challenge facing the Shanghai market is competition for space. The rapid expansion of brands such as Uniqlo, Gap, Zara and H&M is putting a strain on the supply of suitable space available. “The result is that fast fashion brands may be priced out of the market thus leaving a massive and potentially lucrative market unrealized,” says Zialcita.

Another hurdle for the Shanghai retail market is that some retailers are expanding rapidly, perhaps getting too far ahead of Shanghai’s maturing consumers and their available spending power. “Therefore, a small drop in growth looks obvious or retailers may dilute their sales after opening too quickly,” says Tan. “However, we see this is a good process for a better and healthier market environment for the future.”