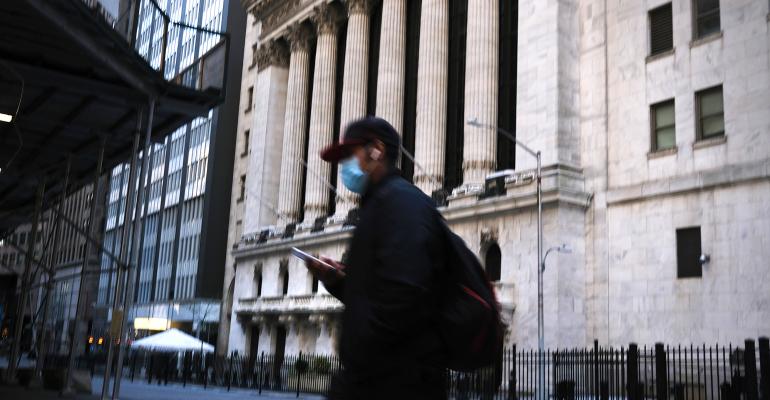 (Bloomberg) -- One after another, some of the most embattled names in corporate America are racing to raise easy money while they can.

The rush underscores the angst gripping many companies even as global investors drive financial markets to giddy heights. With reduced odds for a large stimulus package, companies looking for money to tide them through the crisis are riding an election rally and progress toward a vaccine that could end the pandemic. Traders also cheered the prospect of a split Congress that may limit regulatory changes and tax increases. But it could be a short reprieve, with President-elect Joe Biden warning a “dark winter” lies ahead as the virus roars back, signaling some hard months before a vaccine is available.

“Companies are currently focused on strengthening their balance sheets and boosting cash liquidity,” said Nicholas Elfner, co-head of research at Breckinridge Capital Advisors. “The window is open, so take advantage of it -- before a Covid Winter.”

There will likely be more companies tapping credit markets amid record low borrowing costs, to either shore up cash, or to curb the cost of their existing loans or bonds with new and cheaper debt.

Among them were two firms in the beleaguered energy sector -- Continental Resources Inc. and Antero Midstream Corp. -- which were even able to increase bond offerings to help repay their existing debt. Oil producer Continental offered $1 billion of bonds initially before increasing the notes to $1.5 billion, a rare occurrence of late for junk-rated energy companies.

Antero, which owns and operates midstream energy assets, was also able to boost its sale by $150 million to $550 million last week, just after Americans went to the polls to vote. It sold the bonds due in 2026 -- to repay debt and help improve liquidity -- at a yield of 7.875%. Other notes held by the company due in 2028 yielded over 16% in March, when the pandemic took hold in the U.S.

Tervita Corp., a Canadian company that provides waste management services to oil and gas companies, is marketing $500 million of bonds. The company had suffered as quarantines crashed demand for oil.

And at these rates, other companies will follow suit, either opportunistically or to help weather the impact of Covid-19, according to Jerry Cudzil, head of U.S. credit trading at TCW Group Inc.

“All-in yields are almost too enticing for companies to ignore,” he said. “Given the recent rally, many companies can access the capital markets at levels not seen since pre-Covid.”

Then there are the cruise operators, which are among the hardest hit by the virus. Carnival, the world’s biggest cruise company, filed to sell as much as $1.5 billion in stock after its shares surged on Monday in their biggest one-day increase ever.

Norwegian Cruise Line Holdings Ltd. would look at potential capital raises “on an opportunistic basis,” Chief Financial Officer Mark Kempa said on a conference call Tuesday. He added there was a “solid runway” of cash and wasn’t in a rush. Kempa said the potential moves could include raising money in the equity market.

American Airlines also priced an offering of about $500 million in common stock at $13 per share, people familiar with the matter said. The company will use proceeds to enhance its liquidity position, it said in a statement. Theater chain AMC Entertainment Holdings Inc., struggling to stay afloat, filed to offer up to 20 million shares late on Tuesday.

In signs that some companies affected by the pandemic may find more willing investors now, credit derivatives traders also pared back default bets on some Covid-affected companies over the last couple of days, according to data from ICE Data Services, including American, Carnival, and Avis Budget Group Inc.

Companies are also rushing to sell convertible bonds -- securities that can be exchanged for equity if the stock reaches a certain price level. Square Inc., Redfin Corp. and Novocure Ltd. all recently issued such notes.

“There is a light at the end of the tunnel, so convertibles are coming from classic issuers -- tech and health-care companies,” said Santosh Sreenivasan, JPMorgan Chase & Co.’s head of equity-linked capital markets. The motivation there is “why not take the money while you can with terms so attractive,” he said.

--With assistance from Paula Seligson and Crystal Kim.