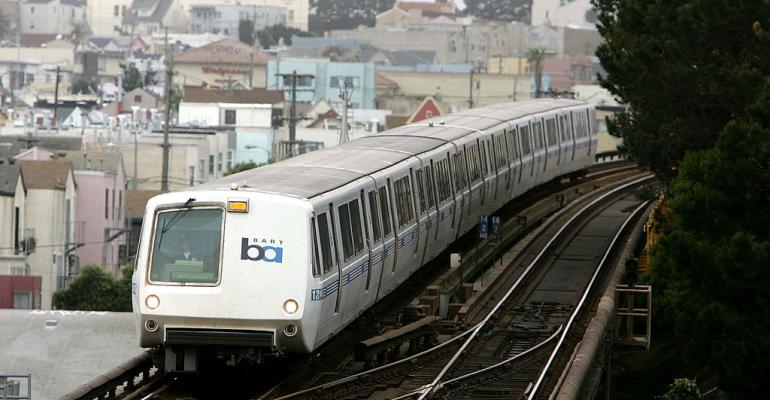 The San Francisco Bay Area Rapid Transit District, which runs trains connecting San Francisco to two nearby counties, transports about 20 percent of the local payroll. While the region’s tech-fueled economy is booming, the agency is struggling to handle the record ridership that has grown by more than 25 percent in five years.

To keep pace, officials are asking voters in San Francisco, Alameda and Contra Costa counties on Nov. 8 to authorize the sale of $3.5 billion in general-obligation debt, part of an overall $9.6 billion capital plan. The agency wants to replace original rails and power cables and modernize stations in a bid to cut delays now estimated at more than 400 hours annually.

Without a fix, commuters could abandon the service called BART -- exacerbating clogged freeways, undermining new corporate relocations and setting back the area that’s already straining under the most expensive residential real-estate market in the country. Drivers in the San Francisco area wasted an average of 75 hours last year sitting in traffic, tying it for the second-worst congestion behind Los Angeles with Washington, D.C., according to analytics firm Inrix.

"Having a wider economic growth in the Bay Area requires a reliable mass transportation infrastructure," said Ben Woo, senior analyst in Minneapolis for Columbia Threadneedle Investments, which manages $24 billion in local debt, including the agency’s bonds. "If BART becomes unreliable, and whether that would have any implications to the economic growth in the Bay Area, that for us is a valid question we have to ask and answer if the ballot is not passed."

No independent polls have gauged support for the measure, which voters are facing along with a record number of local initiatives and 17 statewide ones. The sheer volume creates uncertainty over which ones will pass, said Howard Cure, head of municipal research in New York at Evercore Wealth Management. At the last presidential election, about 58 percent of county measures such as the district’s that require approval of two-thirds of the electorate passed, according to Michael Coleman, fiscal policy adviser for the League of California Cities.

The agency started in 1972 with 12 stations and carried 100,000 passengers its first week. Now, trains with cushioned seats and hanging straps rumble by 45 stations and pick up more than 400,000 people on an average weekday. Jobs in the region number 1.8 million, according to Fitch Ratings.

Officials expect daily ridership to increase to 500,000 by 2025 and 600,000 by 2040 -- if they can maintain the system in good working order. As is the case with many transit agencies across the country, BART found more federal funding -- and more eager local politicians -- to expand lines rather than to invest in the existing nuts and bolts of the system. The average age of rail cars is 30 years, compared with 26 in Chicago and 21 in New York, according to an agency presentation.

Earlier this year, the district acknowledged to commuter outrage that 70 percent of the cameras in trains were decoys. New trains will have working surveillance.

BART officials say they have invested in capital projects with more operating revenue than is typical for a transit agency, with $500 million over the past five years. But repairs can no longer suffice as parts and technology become obsolete.

"We just couldn’t get enough money and get this done fast enough to keep up with the failing infrastructure," said Dennis Markham, manager of financial programs and planning for the agency.

At the same time, the regional job boom continues. Employment in the three counties served by the rail will grow by about 30 percent over 19 years and the population by 18 percent, bond documents show.

It was general-obligation debt that funded the first tracks, with $792 million issued from 1963 through 1969. Voters last approved general obligations in 2004 for earthquake safety. If they sign off on this measure, the annual property tax bill on average would increase by 80 cents to about $17.50 per $100,000 of assessed value, according to district estimates.

If the ballot measure fails, it won’t "cripple" the system since it generates enough to fund repairs, said Eric Friedland, director of municipal research in Jersey City, New Jersey, for Lord Abbett, which manages $20 billion of local debt including the agency’s. More than 70 percent of the operating expenses of the district, which S&P Global Ratings grades at the top AAA rank, is covered by fares compared with about 40 percent for many transit agencies, Friedland said.

Still, at some point they need to find a significant source of revenue, he said. Fitch Ratings, which ranks the district the second-highest step of AA+, said any failure to sustainably address its backlog of projects could lead to a downgrade.

"There’s just nothing else that’s as big a risk to them as consumers thinking that they are not a reliable way to get to work on time," said Andrew Ward, a Fitch analyst in San Francisco. "They need to address this, period. The longer they delay, the more it will cost them."