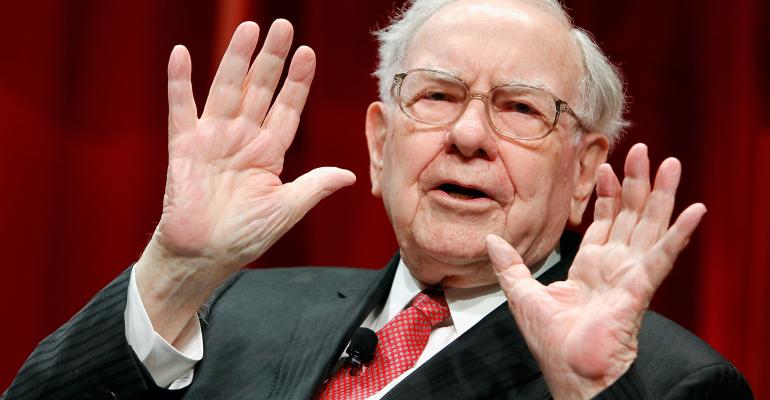 Unlike other retail landlords that have come under pressure as consumers shop more online, Store focuses on what it calls service properties: preschool facilities, health clubs, dine-in movie theaters and pet-care sites.

(Bloomberg)—Warren Buffett is betting that some types of brick-and-mortar real estate will hold up better than others in the age of Amazon.

His Berkshire Hathaway Inc. took a 9.8 percent stake in  Store Capital Corp., sending shares of the real estate investment trust surging Monday. Unlike other retail landlords that have come under pressure as consumers shop more online, Store focuses on what it calls service properties: preschool facilities, health clubs, dine-in movie theaters and pet-care sites. Less than a fifth of its portfolio is invested in traditional retail -- and even those it calls “internet resistant,” including furniture stores, hobby and craft centers, and hunting, fishing and camping shops.

Retail REITs have taken a beating from investors as Amazon.com Inc. and other online sellers make it easier for consumers to buy clothing, toys and other items from their computers or smartphones and not have to step foot into a physical store. Buffett, for his part, has long expressed confidence in property investments to generate income for extended periods of time, and to provide a cushion should the dollar lose value. He has said such bets, whether in buildings or agricultural land, are often safer than gold or bonds.

“Ideally, these assets should have the ability in inflationary times to deliver output that will retain its purchasing-power value while requiring a minimum of new capital investment,” Buffett wrote in a letter to shareholders in 2012. Farms, real estate and businesses such as Coca-Cola Co. “meet that double-barreled test.”

As an owner of single-tenant buildings, Store manages its properties differently than many retail landlords. Tenants cover the costs of operating the real estate, including taxes, maintenance and insurance. Scottsdale, Arizona-based Store essentially acts as a finance company for middle-market tenants without access to affordable capital, St. Juste said.

“They get mom-and-pops’ capital on much better terms by monetizing their real estate,” he said.

Store Capital issued 18.6 million shares to Buffett’s company in a private placement at $20.25 apiece, the REIT said Monday in a statement. That compares with Friday’s closing price of $20.77. The $377 million investment by Berkshire follows a deal last week in which it agreed to prop up Canada’s Home Capital Group Inc. by providing a credit line and committing to take an equity stake.

“Berkshire Hathaway’s investment solidly positions Store for continued growth,” Christopher Volk, the REIT’s chief executive officer, said in the statement. “An investment in our company from one of history’s most admired investors represents a vote of confidence.”

Store Capital had dropped 16 percent this year through Friday. It jumped as much as 11 percent on Monday, its biggest gain since the company’s 2014 initial public offering. Home Capital had plunged even more before Berkshire agreed to step in. Then the Toronto-based lender jumped 27 percent the day after the deal was announced.

Buffett has other bets on commercial real estate. Berkshire and Leucadia National Corp. are joint owners of Berkadia Commercial Mortgage LLC, a provider of banking and sales services to the property industry.

The billionaire has also personally invested in REITs. After Sears Holdings Corp. spun off some of its properties into an entity called Seritage Growth Properties, he took an 8 percent stake in the trust. The deal followed an investment, in 2000, in Aegis Realty Inc., which at the time owned shopping centers and other properties in 15 U.S. states.