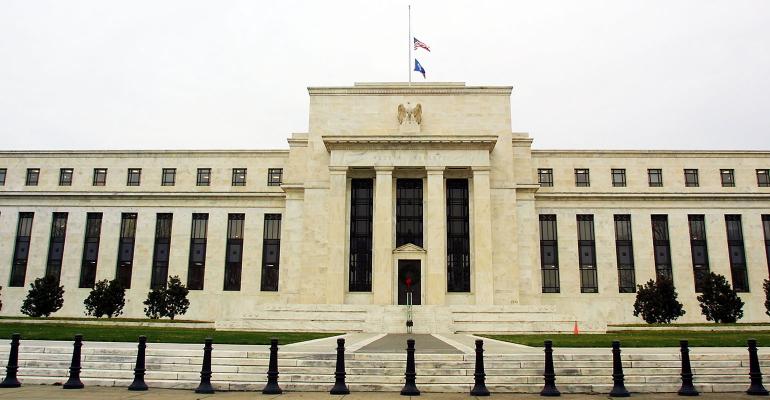 The additional guidance could provide more clarity on what conditions would eventually prompt the Fed to increase or decrease the pace of bond purchases.

(Bloomberg) -- Federal Reserve officials this week will link the future of asset purchases to measures of employment and inflation without taking any immediate action to alter the pace or composition of bond buying, according to economists surveyed by Bloomberg News.

A slight majority of the 47 respondents to a Dec. 4-10 questionnaire said they expected the new guidance will be approved at the two-day policy meeting ending Wednesday, while most of the remaining analysts expect it in January or March.

An actual boost to monetary stimulus this week is seen as unlikely, though. While nearly two-thirds of economists anticipated the Federal Open Market Committee will extend the average maturity of ongoing bond purchases before the end of 2021, just 23% of those forecasting such a step saw it coming at the December meeting.

While limited in its impact, the additional guidance could provide more clarity on what conditions would eventually prompt the Fed to increase or decrease the pace of bond purchases.

Officials are currently buying $80 billion a month in Treasuries and $40 billion a month in mortgage-backed securities in a program designed to put downward pressure on real borrowing costs for households and businesses slammed by the Covid-19 pandemic. They began large-scale purchases in March at the same time as slashing their benchmark interest rate to zero.

Only 19% of respondents saw the Fed increasing the total size of monthly buying in the next year. A larger proportion, 32%, expected officials will reduce purchases in that time frame. The rest, nearly half, predicted no change through the end of 2021.

“The fiscal outlook may be an important factor with respect to potential changes to the Fed’s” bond purchases, Brett Ryan, senior U.S. economist at Deutsche Bank Securities Inc., said in comments accompanying his response. “All else being equal, less fiscal stimulus would put more pressure on monetary policy makers to provide more accommodation to achieve their goals.”

In seeking to fine-tune monetary policy, policy makers are grappling with a high degree of uncertainty. Soaring infections, hospitalizations and deaths from Covid-19 have markedly slowed the economy’s recovery -- and could reverse it -- following the initial hit suffered in March and April. Some forecasters now expect a contraction in the first quarter.

At the same time, the rollout of vaccines and the potential for new stimulus from Congress have raised the chances of a healthy rebound for growth and employment in the second half of 2021.

Another respondent, James Knightley at ING Financial Markets LLC, said the Fed might act with balance-sheet changes if successful vaccines next year prompt long-term yields to rise too far too fast. In that case, the Fed might copy the Bank of Canada’s strategy, he said, of shifting purchases to longer-dated Treasuries but reducing overall purchases.

“By focusing spending there, they could achieve the same amount of stimulus using less ammunition,” he said.

In September, policy makers provided some additional clarity on how long they intend to keep interest rates near zero, but have remained more vague on their plans for future asset purchases.

Minutes of their previous session, in early November, showed most policy makers favored moving to “qualitative outcome-based guidance” that links the horizon for continued purchases to economic conditions.

In the survey, 69% of economists said those economic conditions will likely focus on measures of both inflation and employment.

Respondents didn’t change their expectations for rates, projecting the federal funds target range will stay near zero through the end of 2023.

“As long as the coordination is done willingly and without threats, it makes sense for the Fed and Treasury to coordinate during extraordinary times,” said Joel Naroff, president and chief economist at Naroff Economic Advisors Inc.

--With assistance from Chris Middleton.