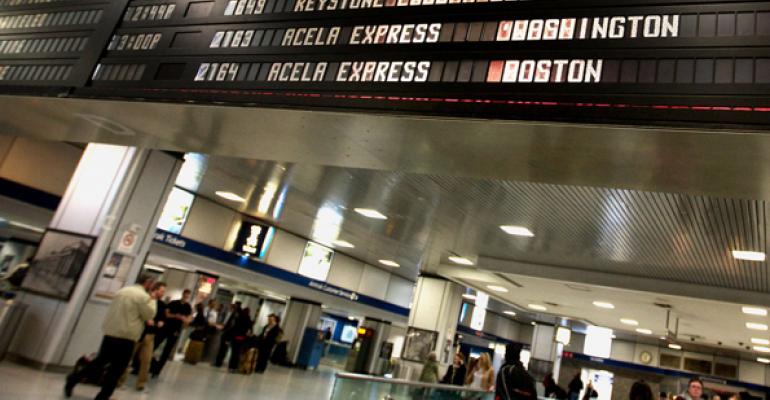 (Bloomberg)—President Donald Trump tapped New York developer Steven Roth as one of his top private-sector advisers on fixing roads, bridges and airports. One of the nation’s most pressing bottlenecks is a familiar one -- untangling the Gordian infrastructure knot that is New York’s Pennsylvania Station.

Roth’s Vornado Realty Trust is the largest property owner surrounding the crumbling rail hub. Its One and Two Penn Plaza towers sit atop the facility, which is owned by Amtrak and used by New Jersey Transit, the Long Island Rail Road and city subways. Madison Square Garden, the arena that covers much of the rest of the station, is owned by yet another constituency -- the Dolan family.

Roth, 75, Vornado’s chairman and chief executive officer, has described improving the area as the real-estate investment trust’s “Big Kahuna.’’ The core challenge is that Amtrak, the national passenger railroad, lacks billions to fix the squalid warren of overcrowded passages, stairways and platforms, the result of a decision more than a half-century ago to tear down the original station, a Beaux-Arts landmark.

Like many intractable infrastructure challenges, Penn Station is the result of decades of failure to keep up with soaring use. The urgency was underscored Friday, when downpours flooded the main entrance and access to two tracks. Two days earlier, Vornado apologized after a broken pipe at One Penn Plaza unleashed a feculent waterfall into a ticketing area. In March and April, the station was the scene of chaos after derailments and track issues, and a stampede after passengers emerging from a stalled train mistakenly thought they heard gunshots.

Penn Station and the fast-decaying Hudson River tunnel that ends there are key to the Northeast Corridor, the Boston-to-Washington route that is the nation’s busiest, defying forecasts that inter-city rail was dying. Most of the 600,000 daily passengers are commuters participating in the $1.4 trillion New York regional economy, which accounts for 11 percent of annual U.S. gross domestic product, according to a 2014 report by the New York Metropolitan Transportation Authority.

“That’s got to be the No. 1 project for that part of the country,” LaHood said.

On May 2, Roth, who has a 1.55 percent stake in Vornado, told investors on a conference call that “Penn Station is the eye of the storm right now, because it had -- it’s got very old obsolete infrastructure. And it’s breaking down and it’s causing commuter issues.”

The sewage-smelling leak, captured on video and embraced by commuters as a metaphor made real, “underscored how all the elements of the station seem to be failing simultaneously,” said Thomas Wright, president of the Regional Plan Association, an organization of businesses and design professionals.

“It’s not fair to point the finger of blame, but it’s more an indicator of the incredible pressure this single facility is under,” Wright said.

Plans for a comprehensive rebuilding have been floated, including relocating Madison Square Garden to allow the creation of a new and beautiful hub. The complexity and many stakeholders make the problem vexing, said Alex Goldfarb, an analyst for Sandler O’Neill & Partners LP in New York. Goldfarb has a buy rating on Vornado’s shares, which were down 8.4 percent this year through Monday.

“Penn Station redevelopment is one of those things that is out there, sort of like cold fusion,” said Goldfarb. “At some point someone will figure out how it works.”

Meanwhile, New York state has chosen a team including Vornado to transform the adjoining Farley Post Office Building into a new, $1.6 billion Moynihan Station for Amtrak and the Long Island Rail Road. The project will handle a minority of rail passengers and won’t open until 2020. Vornado also has a design that would allow natural light into the Long Island Rail Road concourse under West 33rd Street, Wright said. The state hasn’t moved on the plan.

Still, Governor Andrew Cuomo called the Penn Station situation “intolerable and unconscionable.’’ He blamed Amtrak and said while the state is doing what it can, the federal government must step up.

“We need fewer speeches from our federal officials and we need more action and more funding because this is deplorable, and it was avoidable and it was foreseeable,’’ Cuomo told reporters Friday.

Roth’s relationship with Trump goes back to the early 1980s, when the men acquired stakes in Alexander’s Inc. during a takeover battle for the department-store chain. Roth took the company’s real estate -- including what is now the Manhattan headquarters of Bloomberg LP -- and turned it into a $35 billion empire.

Vornado interceded when Jared Kushner, Trump’s son-in-law, almost defaulted on $1.1 billion of loans in 2011 for a Manhattan tower. Vornado injected $80 million in a deal to stave off creditors.

“They’re great builders and they know how to get things done,’’ Trump said during an event in Washington on April 4.

Administration officials have said Trump plans to propose using $200 billion to leverage private-sector capital to amass $1 trillion for transportation infrastructure, veteran’s hospitals and other assets. Trump hasn’t detailed what role Roth’s council will play, but has suggested it could recommend streamlining approvals and procurement.

“The gospel is that the government sets goals, and is bureaucratic,’’ Roth said at a Bloomberg panel discussion in New York on April 24. “The private sector is entrepreneurial and more efficient. The process is improved by switching over from government-managed to private-managed as early as possible.’’

One potential project could be the proposed Hudson River tubes. “None of this other stuff matters if we don’t build those tunnels,” Wright said.

Amtrak is planning weeks of partial service shutdowns throughout the summer to repair rotting tracks in the station. Disrupting the complex morning minuet of trains will mean hours-long treks over land and water. Already, delays are a daily occurrence.

“If a leaf or snowflake falls, they find an excuse,” said Michele Ocejo, who’s been riding New Jersey Transit more than 20 years. On Friday, she left Manhattan early, only to have one train canceled and the next depart 15 minutes late. That was after navigating a station where, she said, “rain was pouring in.”

“It makes you worry someone’s going to get hurt -- something’s going to collapse,” Ocejo said.