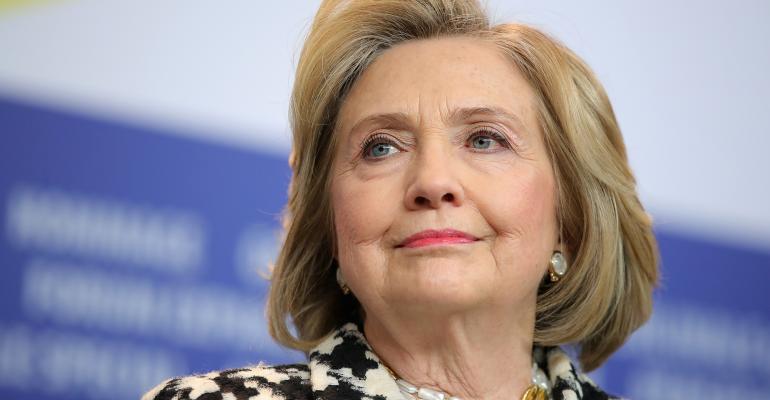 The chorus of voices arguing for a new wave of COVID-19 relief grew louder as many CEOs and political leaders at the Bloomberg New Economy Forum called on governments to act.

(Bloomberg) -- Hillary Clinton joined corporate chieftains in calling for more U.S. stimulus now as the pandemic threatens hopes for a global recovery. On the second day of the four-day Bloomberg New Economy Forum, the former Secretary of State said Donald Trump’s Covid-19 stimulus had not reached those in the greatest need and that she hoped for an agreement on new relief before the new U.S. Congress takes over in early January.

Mastercard Inc. Chief Executive Officer Ajay Banga said a fresh batch of U.S. fiscal support is needed as a renewed surge in coronavirus cases threatens to impact consumer spending. Earlier in the day, European Central Bank President Christine Lagarde reiterated that her institution will “recalibrate” its stimulus in December, widely understood as meaning it will add more monetary support for the economy.

In a panel on cities, Indian Prime Minister Narendra Modi said he is keen to attract foreign investment to modernize the country’s urban centers following the pandemic. Top CEOs including Anheuser-Busch InBev’s Carlos Brito, Unilever’s Alan Jope, HSBC Holdings’ Noel Quinn and BlackRock Inc.’s Larry Fink are scheduled to discuss green investment on the third day of the New Economy Forum, which is organized by Bloomberg Media Group, a division of Bloomberg LP, the parent company of Bloomberg News.

“The original stimulus post-Covid was not sufficient,” Clinton, the former Democratic presidential nominee said on the Bloomberg New Economy Forum’s “Financing the ‘Real’ Economy” panel. “It really did not reach those people -- either the employees or the small businesses -- that were in the greatest need.”

Clinton also said there had been “quite a disturbing action by the Chinese government with respect to Alibaba and Ant,” without elaborating. Beijing in recent weeks has sought to curb the influence of major corporations like Alibaba Group Holding Ltd., and suspended Ant Group Co.’s $35 billion initial public offering.

Ultimately, Clinton said, “even China is going to have to sell into and work within a global economy and we need to reestablish new standards to replace the standards of the past.” -- Karen Leigh

AirAsia Group is “doubling down” in the Asean region as domestic travel recovers from the coronavirus pandemic, AirAsia.com CEO Karen Chan said at the New Economy Forum. AirAsia is confident about a recovery in travel, led by Asia, and the airline is selling passes for unlimited travel within its networks for a certain period in Malaysia, Thailand and Indonesia, she said. -- Kyunghee Park

While travelers are trickling off of airplanes and into hotels, the cruise industry is keeping ships ashore as it grapples with the challenge of keeping passengers safe, said Carnival Corp. CEO Arnold Donald. Business will bounce back once those problems are solved, he said.

“We’re not worried about demand, and we’re not worried ability to price to attract people,” Donald said. “We need to make certain that we’re able to sail safely again, and that the destinations are comfortable.” -- Patrick Clark

“We need the fiscal stimulus and we need it relatively quickly,” he said. “Because I can see where the second wave is coming. You can see consumer spending beginning to get impacted again.”

He said that consumer spending now is in “relatively good shape” and that companies have reached a form of “normalization” amid the virus. “It’s a new normal,” he said. “We’re not really doing the things we used to.”

Nevertheless, he said there will likely be an economic recovery in the second half of next year, returning to a “pre-Covid kind of stage” as vaccines are widely distributed. -- Dan Reichl, Jonas Bergman

While Indonesia is past the worst of the Covid-19 pandemic, risks remain and weak consumer confidence is a major hurdle to reviving businesses and growth, Finance Minister Sri Mulyani Indrawati said at the New Economy Forum. Southeast Asia’s biggest economy probably saw the deepest impact from the virus in the second quarter and a rebound in the third quarter, but “we still need to be very careful” as the virus is flaring up again in some countries, she said. -- Claire Jiao

Tokyo Governor Yuriko Koike said her government has bolstered its push to attract international businesses looking to expand operations to the Japanese capital from Hong Kong.

Tokyo’s government set up an office in Hong Kong last month to help companies make the change. The push comes after a new security law imposed on Hong Kong by China earlier this year has raised question about the city’s autonomy. -- Isabel Reynolds

The world needs to join forces in order to achieve sustainable development in the post-virus era, said Zhang Xiaoqiang, a former vice-chairman of the National Development and Reform Commission, the nation’s economic planning agency. In opening remarks to the NEF, Zhang said efforts should be made in areas such as maintaining an open world economy, investing in green development and digital transformation, as well as enhancing support for small and medium sized enterprises. -- Lin Zhu

European Central Bank President Christine Lagarde warned that a key challenge facing policy makers is to stop the current economic crisis due to the coronavirus pandemic morphing into a financial crisis.

A “risk I see is that potential financial spillover, which we managed to avoid so far,” Lagarde said at the Bloomberg New Economy Forum on Tuesday. “We need to stay really clear of that because that would be an aggravating factor.”

New lockdowns to curb the spread of the coronavirus have put the euro zone on the verge of another slump as winter starts. While the prospect of effective vaccines soon is encouraging, they’ll come too late to avoid more economic damage.

Atlanta Mayor Keisha Lance Bottoms said that the Georgia city has developed a roadmap for recovery as it struggled with the effects of the Covid-19 pandemic. But the number of people and businesses that need assistance is substantial and growing.

“It’s going to be relevant to many more people who didn’t expect to see themselves in this position,” Bottoms said during a Bloomberg New Economy Forum panel on Tuesday. “There’s going to be a large economic impact that will likely last for years.”

The mayor of the southeastern U.S. city said that the combination of the virus and social unrest “made us focus on what our goals were.” Affordable housing, jobs and funding for economic development projects are priorities of Atlanta’s plan. As the pandemic continues, Bottoms said she believes that the region’s technology sector will prove resilient, but other areas of the local economy, such as the many small minority-owned businesses at Hartsfield-Jackson International Airport, will need more assistance to recover. Many airline workers have been furloughed and passenger traffic is down substantially. — Brett Pulley

“Leadership is so critical,” Alabbar said. Since the spread of the pandemic, which he described as an “attack on humanity,” the United Arab Emirates, where Dubai is located, has been “very serious about managing its affairs.” — Abeer Abu Omar

With Covid Under Control, Travel Recovers in China (10:50 a.m. NYT)

In China, the travel and transportation industries are showing signs of life as the coronavirus pandemic heads toward the end of its first year.

Jean Liu, president of Chinese ride-hailing company Didi Chuxing Inc., said in a panel at the Bloomberg New Economy Forum. That business fell “off a cliff” when the pandemic started in January and February. But Liu gradually saw a recovery in April, and Didi is now racking up 60 million rides every day. “Right now we are fully back,” she said.

Liu said she is most proud of the initiative her company came up with to shuttle healthcare workers around the city when there was no public transportation. Around 140,000 drivers volunteered, she said.

Covid-19 has devastated communities across the globe, but as with disease outbreaks of the past, cities can not only survive but see themselves transformed for the better.

“In every crisis there is also an opportunity,” Lord Mayor Hazel Chu of Dublin said in a panel at the Bloomberg New Economy Forum. Dublin, Chu said, has been rolling out a series of transportation improvements in light of the pandemic to help people move around. Among the ideas the city is pursuing is the establishment of a “15-minute city,” in which the needs of all residents can be met within a walking or biking system.

But it’s critical to prevent the 15-minute concept from becoming a “bubble” for wealthy citizens, Chu said: The Covid crisis is also exposing the deep inequalities inside cities, and accelerated the need for healthier buildings, more efficient public transit to prevent crowding, and better integration among communities of different socioeconomic backgrounds. — Linda Poon

Covid-19 has given governments the chance to accelerate the “process of making cities more livable for people,” Modi said in his speech on Tuesday. “We are looking at a future where a major chunk of education, healthcare, shopping, may happen online. Our cities need to be ready for the convergence of the physical and digital worlds.”