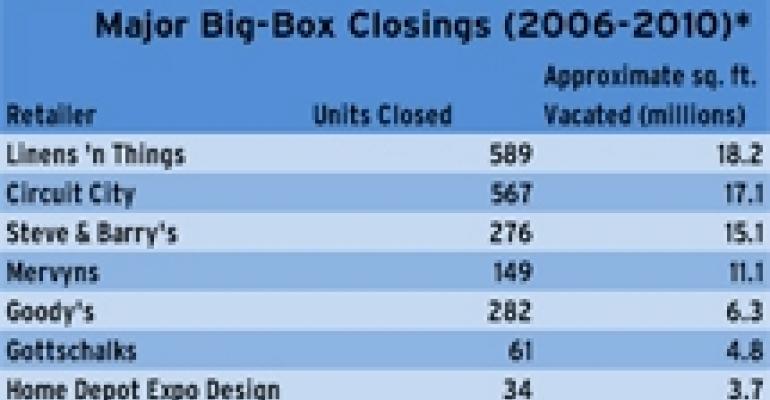 Closures by big-box tenants have hurt the retail real estate industry over the past few years. But has the problem been even more dramatic than previously thought? Findings from the first part of a two-part white paper published by Colliers International estimates that vacant, large-format retail stores in the U.S. actually account for more than 34 percent of all retail vacancy.

Further, the paper, which features Colliers Retail Research Director Garrick H.S. Brown as its principal author, says, “In fact, approximately 120 million square feet of big box retail space has been vacated since January 2008 alone. That figure is roughly the equivalent of the entire shopping center inventories of Baltimore, Cincinnati and Kansas City combined.”

Many of the culprits make up the familiar rogues’ gallery of now-defunct retailers including Circuit City, Linens ‘n Things, Mervyns and Steve & Barry’s. But liquidating chains were not the only problems. During the difficult retail climate that emerged as part of the Great Recession many large format retailers slimmed portfolios and exacerbated the problem. And now fears are arising that Barnes & Noble will be the next big-box chain to close stores.

In some markets, the glut of big-box space added to the market was dramatic. For example, more than 50 big boxes closed in Las Vegas since 2007 while Charlotte, N.C. saw 25 big boxes go dark. And in Chicago, Colliers estimates that there are approximately 175 empty vacant large spaces accounting for almost 9.5 million square feet of space.

This, unsurprisingly, has had an adverse effect on rents. Deals getting done today are at rents that are between 30 percent and 40 percent lower than peak levels in 2008. According to the report, “For tenants with the cash to pay for their own improvements, we have seen rental rates discounted by as much as 50 percent or more. In many markets, big box space that previously rented from $13 to $16 per square foot (on an annual triple net basis) is now being leased for approximately $10 per square foot if the landlord contributes tenant improvements. In cases where tenants are paying for their own improvements, we have seen deals go for as low as $5 per square foot.”

Vacant big boxes have also hurt property values leading to properties trading for fractions of the cost that they sold for four or five years ago. Citing data from Real Capital Analytics, the report found that the average price of big-box space sold over the past year nationwide has been $97 per square foot, with an average cap rate of 7.8 percent.

Still, the picture is not all bleak. The lower rents available today are encouraging some new big-box users to emerge and expand. There is buzz surrounding a new children’s concept called WONDER!, which will open its first location later this year.

Ultimately, Colliers concludes that the worst may be over for big-box spaces, although additional vacancies may still occur for the next two years. However, there is now enough demand from potential users of space to help ease the blow.

The report concludes, “But even with further consolidation within the grocery sector, the amount of space being returned to the market will be outpaced by the number of users backfilling vacant big boxes. Top-tier big box locations—those within busy shopping centers or situated on prime intersections— are already moving quickly. We expect that most of these will be backfilled within the next 12 to 24 months. But it will still take years to work through the current glut of big box vacancy.”