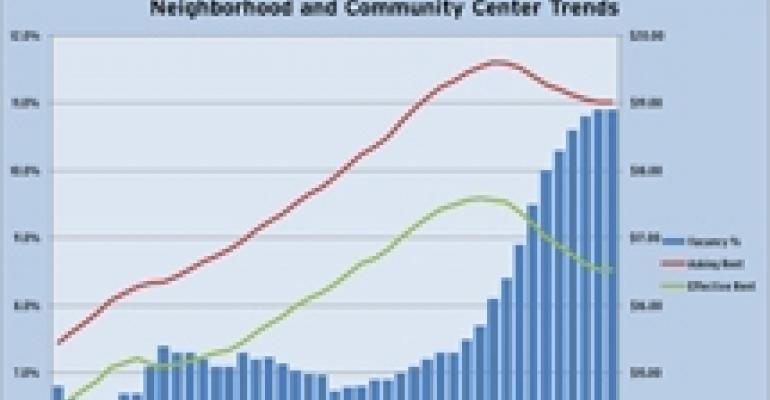 Retail Vacancy Rates Fall, But Does it Mean Recovery?

Leasing fundamentals in the retail sector improved slightly in the third quarter of 2010, according to reports by Reis Inc., CoStar Group and CB Richard Ellis. The improvement broke a long dry spell for retail real estate during which rents slipped and vacancies rose for more than four years.

The firms monitor different markets and chop up the retail sector in slightly different ways. But all three measured improvements in the latest quarter.

Lastly, CBRE Econometric Advisors, a Boston-based research firm, measured an overall retail vacancy rate of 13 percent for community and neighborhood shopping centers, down 10 basis points from the quarter prior. This came after 17 straight quarters of vacancy increases.

The question that faces the industry now is if the third quarter figures are a blip with conditions worsening in the months ahead or whether they represent the beginnings of improving fundamentals. Experts are split on the matter, although macro-economic indicators—including sluggish GDP growth, lingering unemployment and wavering consumer confidence—point to a tortoise-paced recovery at best. At worst, those conditions could spell continued declines.

“I think the retail market has survived better than people thought it would a year and a half ago,” says Robert Bach, Chicago-based senior vice president and chief economist with Grubb & Ellis, a commercial real estate advisory firm. “I don’t think that consumers are out there spending recklessly, but they feel more confident and they are taking advantage of deals. That’s having some effect.”

Another factor that has contributed to improving fundamentals is the fact that the amount of new retail space delivered to the market continues to shrink, says Chris Macke, senior real estate strategist with the CoStar Group. In the third quarter of 2010, the amount of newly delivered space totaled 5.6 million square feet. In contrast, during the first quarter of 2006, the market saw 82 million square feet in new retail properties, Macke points out. He expects that developers will continue to keep tight reins on the construction pipeline going forward. With minimal new space added to the market, if consumer spending simply stays stable, vacancy levels will gradually improve, Macke says.

He also notes that the declining rental rates might be playing a role in creating leasing momentum. Retailers that would not opt to expand otherwise are taking advantage of the available bargains. In the third quarter, average asking rents fell 1.4 percent from the quarter prior, to $15.18 per square foot, according to CoStar. The figure was also down 4.28 percent from the same period a year ago.

Yet Ryan Severino, a Reis economist, notes that this improvement in fundamentals might be short-lived, rather than signaling the beginning of a long-term trend.

Nothing in the current macro-economic picture suggests that retailers will become significantly more active about leasing new space, Severino says. National GDP grew only 2 percent in the third quarter and 1.7 percent in the second quarter, according to the Bureau of Economic Analysis, compared to growth of 3.7 percent in the first quarter. In September, the national unemployment rate remained unchanged from the month prior at 9.6 percent. And the Deloitte Consumer Spending Index, which measures consumer cash flow as a predictor of future consumer spending, fell to 4.5 percent last month, from a gain of 4.8 percent in August.

Likewise, Abigail Rosenbaum, economist with CBRE Econometric Advisors, a Boston-based research firm, note that there might be a slight bump-up in vacancy in the fourth quarter of 2010.

Severino expects a lackluster leasing environment to persist through 2011, with a modest recovery in 2012. In fact, Reis predicts that the retail vacancy rate might overtake the all-time high of 11.1 percent sometime next year, largely as a result of all the over-building that took place during the boom.

Third quarter numbers “look like a sort of temporary halting as opposed to any real change of direction,” Severino says. “A lot of it stems from the fact that things have not been worsening at the rate they once were. And there is some seasonality in the third quarter, such as back-to-school shopping, that supported the market. What we saw is a slowing down in deterioration, not any sort of a trend reversal.”