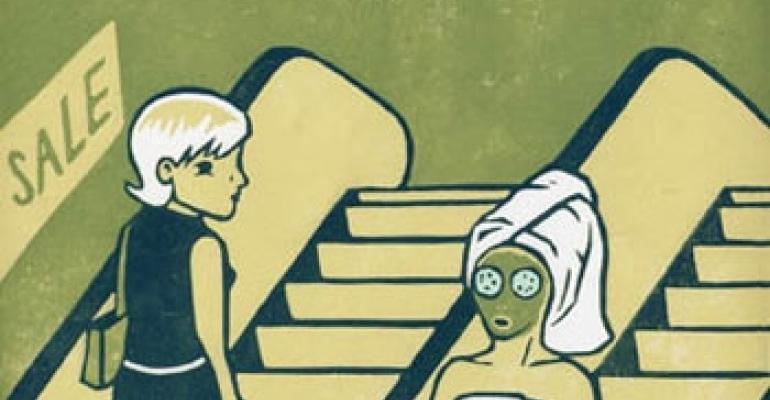 The recession and slowdown in consumer spending has hit every corner of the retail sector—including temporary tenants. Operators of kiosks that hawked everything from discounted sunglasses and jewelry to toys and cell phone accessories have disappeared amid the economic storms. But specialty leasing pros are finding unconventional success thanks to a rise of kiosk-based health and beauty services. Such tenants are emerging as important players in the $12 billion a year specialty leasing business.

This is important in a climate with retail vacancies rising at malls across the country. ICSC predicts more retail chain store closings, 3,100 in the first half of this year; in addition to the more than 6,100 estimated shuttered in 2008. That means retaining a vibrant specialty leasing business is more important than ever, notes Rudolph Milian, senior staff vice president, director of professional development services for ICSC. “All of a sudden, we’re in this credit crisis and specialty leasing has become a top priority for retail real estate to make up for the shortfall in rental income,” Milian says.

Today, massages, chiropractic evaluations, teeth-whitening and eyebrow threading are fast becoming popular offerings by temporary tenants. It leads to an interesting scene playing out in mall common areas across the country. Increasingly, you’ll walk through malls and find consumers sitting in dentist chairs, lying on massage tables or getting facials.

The appeal is that services offered at kiosks typically cost less than half the price than they would in more conventional settings. Furthermore, by setting up out in the open, the kiosks are driving a fair amount of spontaneous business in an area where consumers already congregate. Not to mention, the additional revenue generated by this burgeoning category to the specialty leasing sector helps mall operators partially offset the decline in rents stemming from vacant in-line stores.

Patricia Norins, publisher of Specialty Retail Report, a Hanover, Mass.-based magazine covering temporary tenants, notes the trend of medical and quasi-medical procedures and wellness services offered by specialty vendors began in 2007 and grew by leaps and bounds last year as the economy became mired in a recession. With the economy as it is, she says, consumers can still treat themselves and stay within their budget.

“When we’re stressed, we look for little goodies,” says Linda E. Johansen-James, president and CEO of the Las Vegas-based American Kiosk Management. It is the owner/operator of 377 carts and kiosks at malls in the United States and Canada; 95 percent of which are in the U.S, many of them sell Proactiv Solution Skin Products. “People will give up buying a pair of shoes or pants, but, when it comes to taking care of themselves they’re still spending,” says Johansen-James.

For example, since August, Youngstown, Ohio-based Cafaro Co., has received at least one inquiry per month from vendors in the $11 billion-a-year massage chair business looking to lease space at the 162 retail merchandising units (RMUs) it has spread through 14 malls in the United States.

One such vendor is Holbrook, N.Y.-based BackRubber. Last year, the firm sold 400 $1,800 chairs, according to BackRubber vice president Lawrence Carvano. He attributes the success to the fact that the economic pressures are leaving consumers feeling more stressed. “They’re worried about losing their jobs,” Carvano says. “They’re at the mall spending money, but they don’t have as much money and they’re searching for relaxation.”

The wellness category has come on strong as well in the last year or so, says Deborah J. Georgetti-Piro, senior vice president, Mainstreet, the Mills Corp., a Simon Company (NYSE:SPG). Georgetti-Piro is in charge of specialty leasing. It recently added eyebrow-threading and teeth whitening vendors to its mix of specialty leasing tenants. The Mills centers, which Simon acquired along with Farallon Partners in 2007,don’t have traditional regional mall layouts. The centers’ footprints are typically more than one million square feet on a single-level. In some cases, the malls are laid out in a race track format. Shoppers in those settings—where they might be covering more ground—have welcomed the pods of vending massage chairs, Georgetti-Piro says. “We strategically put these chairs throughout our centers so people can relax, rejuvenate and then continue their shopping experience,” Georgetti-Piro says. The cost: $1 for 3 minutes up to $10 for 30 minutes.

Similarly, at Australia-based Westfield Group’s (ASX:WDC) Westfield Shoppingtown, in Milford,Conn., Pleasure Island, offers fully-clothed aqua-massages, for as little as $7 for five minutes up to $30 for a half hour. The business, owned by Bill Pavia, has picked up a lot of business from people walking buy. “If a husband and a wife come by, they will try it,” he says. “Afterwards, the husband will tell the wife, ‘Go on, finish shopping and meet me back here.’”

Mertes/Piller Chiropractic Clinic in Peru, Ill. chose to advertise and perform free chiropractic consultations at a kiosk in Peru Mall, to generate business for its off-site practice. Dr. Michael Piller says, his fiancée, an esthetician, who administers facials and provides skin care assessments at a spa, Ariva, also located in Peru Mall told him of a kiosk’s ability to leverage the mall’s foot traffic. “I wanted to get to as many people as I can, so we needed to go where the people are,” says Piller, co-owner of Mertes/Piller Chiropractic Clinic. In its five months of offering chiropractic assessments at Barrington, Ill.-based GK Development’s Peru Mall, Piller says he has added 30 patients to the practice.

Teeth whitening has become another of the popular potential service-oriented temporary tenants mall owners and managers can turn to. This past fall, GK Development brought a teeth-whitening temporary tenant to its Columbia Mall in Grand Forks, N.D. “Given the economy, these services and treatments are an affordable option for our consumers,” says Amy Jo Hall, senior director of specialty leasing at GK Development. Such services at mall kiosks run approximately $99. That may sound steep, but it’s just one-fifth the price that a patient could pay at a dentist’s office for a similar service, estimates Georgetti-Piro.

Patrons frequenting health and beauty services for maintenance can help drive repeat traffic. Eye Beauty in Peru Mall, has a significant base of loyal customers who, manager Urmila Patel says, return every two to four weeks. And, if they enjoy long-term success, such tenants sometimes opt to upgrade to in-line space. The volume of repeat customers to Mills properties is responsible for approximately 20 percent of its specialty leasing teeth-whitening and eye-brow threading vendors eventually signing long-term leases for in-line space at its portfolio, Georgetti-Piro says.

At Peru Mall, Eye Beauty operates one of its seven eyebrow threading venues located throughout Illinois. However, it is the only one that is a specialty leasing tenant and does not occupy an in-line space. Being out in the open affords the location greater visibility among shoppers passing by unaware that the services were available at the mall, Patel says. Furthermore, the lack of privacy, Patel says, has not been an issue for customers during Eye Beauty’s three years at Peru Mall. “We left it to the customer to decide if they feel comfortable participating in that service out in the open,” adds GK Development’s Hall. Today, it’s so much more acceptable to have personal services performed in public view, she adds. There’s a cultural shift that we’ve seen in baby-boomers and their children as they embrace the culture of wellness.

When Hall was first presented with the idea, she admitted to having reservations. “Was I sure it would work? No. But, that’s the beauty of specialty leasing, we strive to give our customers a diverse offering and see if an idea will work in a mall environment.” GK Development, Hall says, established guidelines for service uses so that both the operator could perform the treatments professionally and shoppers would still enjoy a pleasant atmosphere.

At the Mall of America, in Bloomington, Minn., teeth-whitening is done in a kiosk, behind a four-foot-high wall offering a semi-private setting. We had the option to put them in an in-line space, says Lisa Taylor, specialty leasing manager for the Mall of America. “But, the operator wanted the visibility," she says.

This past holiday season Cafaro enjoyed some success with three massage chairs in a kiosk at one of its malls. Still, Cafaro rejects requests by vendors for year-round tenancy. “As a developer we just don’t want that type of use out in the common area on a year-round basis, says Dan Mancuso, vice president of specialty leasing at Cafaro. During the holiday season, Mancuso says, there was a novelty appeal. Still, he says, Cafaro’s rejects requests for year-round tenancy. However, they do offer available in-line spaces to those vendors. “Some things are just done better in a room,” says Mancuso.

Ivanhoe Cambridge Inc’s., vice president of specialty leasing and partnerships Suzanne Cayley agrees, it’s a personal service that should be done behind closed doors. The Toronto-based developer’s Cayley noted with all the empty storefronts arising from retailer bankruptcies and store closings there is an abundance of in-line inventory that would be best used to keep these services private. At the very least, she says, they should install frosted privacy glass in the kiosk to keep the personal experience from becoming a public experience.

However, Blackford argues mall owners and operators cannot lease to their own tastes. “You have to lease to the demographics of the customer who is coming to your mall," Blackford says.