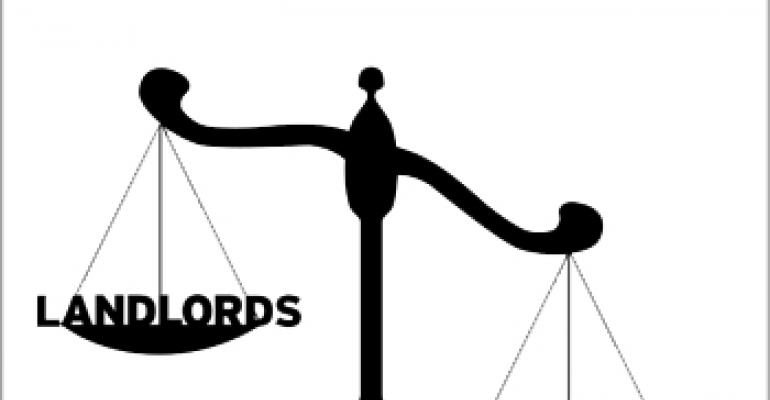 In spite of projections that retail space availability nationwide will start to decline by mid-year, retailers continue to call the shots in lease negotiations.

The days of every tenant asking for rent concessions have passed. However, national, credit-rated tenants willing to take sizeable chunks of space know they are rare enough to demand generous TI packages, shorter than average leases and caps on common area maintenance (CAM) charges from landlords.

Moreover, with retailers carefully evaluating store portfolios and rethinking occupation strategies, the balance of power will continue to favor tenants in lease negotiations for the foreseeable future, even as property fundamentals improve.

“I don’t think the pendulum has swung back to where tenants are not in the driver’s seat, especially when it comes to credit tenants,” says Branson Edwards, Chicago-based executive vice president and managing director of retail occupier services with commercial brokerage firm Grubb & Ellis. “There is still a lot of uncertainty with existing tenants and still a lot of changes in vacancy happening in the marketplace. Generally, across the country, it seems to us that we are still some time away from there being parity between tenants and landlords.”

Last week, CBRE Econometric Advisors, a Boston-based research firm, forecast that space availability at neighborhood, community and strip centers will decline to 12.7 percent by the end of 2011, from 13.1 percent today. Meanwhile, the CoStar Group, a Washington, D.C.-based research firm, estimates the retail vacancy rate to be around 7.1 percent—in line with the fourth quarter of 2010. Whether the retail real estate sector will see positive net absorption in the coming months will depend in large part on the rate of employment growth, the firm’s researchers say.

In addition, quoted rents in the first quarter fell to $14.86 per square foot, from $14.91 at the end of 2010, CoStar reports. CBRE Econometric Advisors projects that rents at neighborhood, community and strip centers will continue to decline through the rest of the year, bottoming at $18.92 per square foot in the fourth quarter, down from $19.09 per square foot today. Next year the industry will begin to see rent growth.

“[We] believe that rents coming back to pre-recession levels is still two to three years away,” says Naveen Jaggi, senior managing director of retail services with CB Richard Ellis. “Until then, creditworthiness of the tenants will drive most deals.”

In addition to favorable rents, tenants looking to take new space can often still get a myriad of concessions—ranging from help with build-outs to termination and kick-out clauses.

Owners of shopping centers, power centers and class-B and class-C malls dealing with vacant boxes left over from the spate of tenant bankruptcies that occurred in recent years are not in strong bargaining positions. Creditworthy national tenants continue to have a lot of spaces to choose from when contemplating new deals and they expect to see landlords share some of their real estate costs. In such cases, offering tenant improvement (TI) allowances is key to getting tenants to commit, notes Jaggi.

For example, a national credit-rated retailer signing a lease for a 25,000-square-foot former Circuit City space at a power center will ask for $40 per square foot to $60 per square foot in TI to convert the space into a plain vanilla box, a base rent that can be as low as $10 per square foot in certain markets and a termination clause if sales don’t reach desired levels within a three-year period, according to Gene Spiegelman, executive vice president with brokerage firm Cushman & Wakefield.

“Basically, if I were the retailer, I’d be looking to come in, turn on the lights, and if the situation warranted, leave in two or three years,” he notes.

What’s more, in order to sign new tenants, landlords have been agreeing to caps on CAM charges, in spite of extremely volatile utility prices, says Edwards.

“I’d be surprised if landlords are taking their gas costs as being a given, as we see all kinds of uncertainty in the economy,” he notes. “But that’s a concession that landlords are making, which makes me think that the power is still [on the side] of the tenant.

There are exceptions, however. Owners of class-A malls in primary markets are in a strong enough position that they no longer have to meet every demand from tenants, since vacancy at those centers is back in line with historical levels, according to Spiegelman. As of the end of the first quarter, the vacancy rate at regional malls nationwide stood at 5.8 percent, according to CoStar—a better figure than most other retail property types.

In addition, landlords in a stronger position are pushing back against requests for shorter lease terms. If a retailer gets TI allowances, landlords often push for 10-year terms with five-year options, according to Jaggi. In 2009 and 2010, landlords often accepted three-year and five-year leases. Still, when dealing with weaker properties, tenants accepting the longer terms are asking for kick-out and termination clauses to offset risk, says Spiegelman.

Existing tenants have been taking advantage of early renewals to renegotiate leases, says Michael Weiner, president and CEO of Excess Space Retail Services Inc., a national disposition and lease restructuring firm. Prior to the downturn, most retailers would simply renew leases without renegotiations, he notes. Now it’s become commonplace for tenants to evaluate whether their rents are in line with market rates and ask for discounts if they feel they are over-paying.

In addition, with the FASB accounting rule changes on the horizon, retailers have been trying to do away with percentage rents altogether.

“We’ve been eradicating percentage rent for our clients for the last couple of years, and we’ve been highly successful at it,” Weiner says. “There are ways [to do that] that are acceptable to both parties.”

Overall, Weiner, Spiegelman and the others say they don’t expect conditions in the retail sector to ever come back to what they were pre-recession. After the downturn, national retailers have focused on portfolio optimization and are also blending online and brick-and-mortar sales channels. As a result, the pace of physical store growth will likely be slower than in previous decades.

Meanwhile, many areas of the country continue to have an overabundance of retail space, which means that supply and demand will be out of balance for several more years.

“I think that we would all agree that retailing is changing dramatically and that the nature of storefront retail is changing dramatically, regardless of the type of real estate that retailers are occupying,” says Edwards. “A sizeable portion of retailers are really re-tooling their business model and all of that uncertainty makes a credit tenant still a very dear commodity for a landlord.”