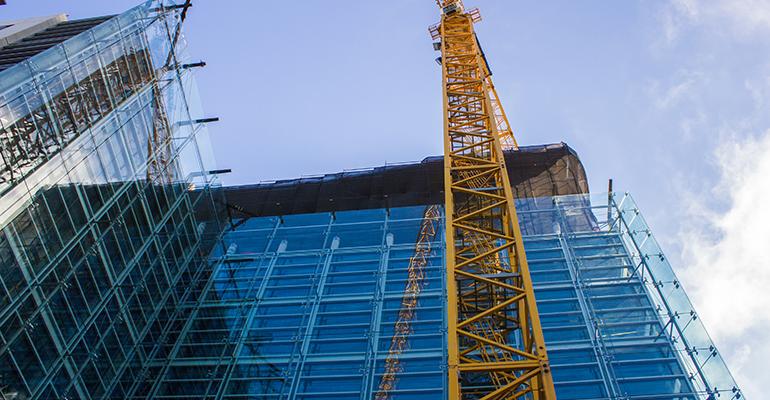 Lenders Pull Back the Reins on New Construction in San Francisco

Is the crown San Francisco wears as the city everyone wants to be in beginning to weigh heavy? This year, the West Coast tech mecca should continue to experience rent growth in the multifamily sector and strong office leasing volumes compared to the rest of the nation. But the surplus of new development coming on-line by the end of the year makes for an environment in which construction financing is increasingly more difficult to attain.

Demand for office and multifamily space in the city will be generally healthy in 2017, sources say. In the case of the office sector, that is spurring extra development that is causing traditional construction lenders to bow out. Multifamily developers, meanwhile, are expected slow the number of units they bring on-line from 2018 through 2020.

In 2016, San Francisco saw 5,200 multifamily units completed, ending the year with a 3.6 percent vacancy rate. However, healthy absorption rates buoyed by a strong employment market are keeping developers active so that more units will come on the market in 2017.

The vacancy rate is expected to uptick just slightly in 2017, to 4.2 percent, when an additional 5,600 units are forecast to be completed, according to Marcus & Millichap’s 2017 Multifamily Investment Forecast. Market vacancy should uptick very nominally, agrees David Weglarz, vice president of multifamily sales at real estate services firm Transwestern. San Francisco and Silicon Valley’s overall multifamily vacancy are each  expected to only rise 0.25 percent this year, he notes.

There are just not enough large-scale apartment buildings that are completed in San Francisco in any one year to satisfy employment growth, according to James Devincenti, executive vice president in the multifamily investment group of real estate services firm Colliers. “With just nine buildings on the market in the entire city right now, supply is fairly limited,” he says.

A five-year multifamily forecast from Colliers expects the addition of approximately 3,000 units per year to the city’s apartment stock. In 2016, 4,225 units built, and between 2017 and 2018, 6,133 units will enter the market. Developers will pause to see how fast those apartments are absorbed through 2018, notes Devincenti. “But there is still a supply/demand imbalance with Bay Area tech jobs.” This may force some prospective tenants to move to the Richmond/Mission District or Oakland in the East Bay, he adds.

However, rents are not expected to climb much higher at this point in the cycle.

By the end of 2017, rent growth will be flat to at most 5.0 percent, Devincenti projects.

“Some owners are not seeing demand for larger units, so that is putting downward pressure on rents for two- and three-bedrooms. But this is not the case for studios and one-bedrooms,” he says.

Developers are taking pause on future projects that would be completed in 2018-2020 to see how the market handles the additional influx of units, he adds. There are not many units planned for 2019 and 2020 because of rising land costs and concerns about the end of the up cycle.

But in the San Francisco Peninsula, which encompasses Silicon Valley, 1.1 million sq. ft. of office space is under construction, with 52.6 percent of it pre-leased. So demand for office space in San Francisco appears generally healthy, with an even tighter market in the Peninsula.

“San Francisco is still driven by venture capital funding; this is short-term money that needs to be invested,” says John Jensen, senior vice president at commercial real estate brokerage Colliers International. “We don’t see softness in terms of surplus space—all those requirements were in the market and then signed leases. The last two months have been robust and we expect that to continue this year, driven not only by technology occupiers; we are seeing non-profit foundations and schools coming from New York touring the market to acquire beachheads this quarter. They are seeing San Francisco as a market to get into.”

In the second quarter of 2016, venture capital funds raised $12.2 billion, the highest amount in 10 years, according to Peter Conte, vice president at commercial real estate services firm Transwestern. In total, 2016 saw $40 billion in venture funds closd. “Venture funds continue to raise money quarter-over-quarter and that has to be invested,” Conte says.

“While leasing velocity has slowed, we are not seeing much excess office space in our marketplace because it is being utilized so efficiently – higher rents and construction costs are forcing higher headcounts and better utilization of the spaces. Certain amount of space constructed has potential to affect the market for next year but not right now, as much of the space coming online has already been preleased,” he adds

Technology tenants are leaning heavily toward the efficiency model for office space, and developers whose projects don’t meet that demand and continue to build skyscrapers with small floorplates will see longer lease-up times, according to Conte.

The technology sector remains the employment driver responsible for gobbling up San Francisco office space, comprising 45 percent of tenant demand or 2.1 million sq. ft. in the fourth quarter, according to Colliers. The other sectors driving demand for office space include professional services (nearly 450,000 sq. ft.), education (about 400,000 sq. ft.) and financial services (about 350, 000 sq. ft.)

Preliminary data from the Bureau of Labor Statistics (BLS) calculated the unemployment rate in San Francisco at just 3.4 percent in December 2016, down from 3.9 percent in December 2015 and below the national rate of 4.7 percent. But employment growth is expected to moderate in the coming years, notes Andrea Cross, head of Americas office research at real estate services firm CBRE. CBRE Econometric Advisors forecasts 1.7 million net jobs added in 2017 nationally and 1.1 million net jobs in 2018. San Francisco itself will see 16,900 new jobs added in 2017, and a net of 10,700 new jobs in 2018, forecasts CBRE Econometric Advisors.

There is an overarching theme in the San Francisco office market of cautious optimism, according to Nate Prouty, senior vice president and managing director at capital services provider NorthMarq.

“The general consensus among most lenders is that there’s got to be a ceiling on rents at some point; they can’t run up much higher,” he says.

As a result, the availability of construction debt is limited compared to two years ago and there is very little construction financing available for speculative office projects, he adds.

“To secure financing you would need the project to be pre-leased or otherwise be willing to provide full-recourse and expect low leverage. Some traditional construction lenders are sitting out at this point in the cycle. In this low cap rate environment, there is no longer the option of a senior mortgage at 80 percent LTV—you can expect 60-65 percent max LTV as most balance sheet lenders (aside from agencies and CMBS) are debt service coverage and debt yield constrained in their sizing.”

Construction loans are challenging to get for both new multifamily and new office projects in San Francisco at this point, says Kevin Kaberna, senior managing director of investments with real estate investment and management firm Greystar. Lenders are zeroed in on the profile of the borrowers and will only lend to existing clients. “If you’re not in the game already, it is a challenging time to enter the market as a new developer,” Kaberna says.

On the permanent lending side, however, San Francisco continues to be attractive as it is considered to be a core market with a positive outlook. “With 35-40 percent equity behind you, lenders are comfortable even if debt yields are lagging. Lenders remain focused on high-quality infill Bay Area locations with proven sponsors,” notes Prouty.