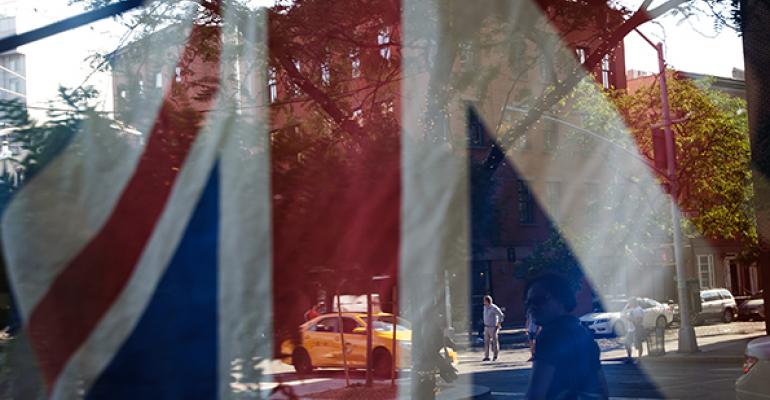 What Brexit Will Do to U.S. Real Estate

With the Brexit vote triggering a new sense of risk and instability, what happens to commercial real estate finance, especially from United Kingdom and European sources?

Alongside that, what do different commercial real estate banks have at stake here? What do they stand to gain or lose by doubling down on U.S. lending or, alternatively, on U.K. or European Union lending?

While a more volatile economic situation prompts many to behave more conservatively, the precise way in which different commercial real estate players will calculate the risk of each action depends a lot on where they sit. Each player needs to weigh the stability offered by U.S. commercial properties against the cost of doing business in the U.S. What do commercial real estate players have at stake now that the British have voted to leave the E.U.?

The glaring truth about Brexit commentary is that for all the ink spilled, no one really knows what the exact fallout will entail. All the same, we have examined the lending portfolios of some of the banks most likely to be affected by the referendum, and taken the liberty of speculating about the impact on commercial real estate by analyzing commercial real estate players' possible strategies according to where they are based.

Though the stability of the U.S. commercial real estate market is expected to be a draw for some lenders, U.K. banks such as Barclays, HSBC and Royal Bank of Scotland have to take into account another risk factor: the exchange rate. The more volatile the pound and the euro are, the greater the risk of losing money by taking funds out of the U.K. and putting it into the U.S. If the pound and euro stabilize, but at a rate lower than the dollar, U.K. banks will be better able to take the exchange rate into account—but will still have to weigh the cost of doing business in the U.S. at an unfavorable exchange rate.

Since the cost of capital is higher in such a situation, U.K. banks could offer less competitive interest rates for borrowers even if they do decide to engage in more U.S. lending. Though we can't know yet what will happen, if U.K.-based banks do clamp down and take some U.S. financing home with them, they are more likely do so after the loans mature.

Such a move would ultimately provide other lenders with refinancing opportunities. Let's take Barclays as an example. Barclays issued approximately $15.8 billion in commercial real estate loans across the U.S. in 2015, in cities including Houston ($169.6 million in loans); Jacksonville, Fla. ($51 million); Los Angeles ($32 million) and New York ($93.6 million). (Note that these loan amounts may not reflect all affiliated lender entities in the Barclays ownership structure. Condo data limited or excluded for all lenders.) Some of Barclays' biggest U.S. commercial real estate loans in 2015 include a $720 million cross-collateralized loan for properties including the Red Roof Inn on North Pointe Drive in Durham, N.C., near Duke University Medical Center, as well as a $655 million for 1993 North State St., a retail property in Greenfield, Ind., that matures in 2020.

Some of the British-based owners of commercial properties in the U.S. are banks like HSBC, which owns multifamily properties such as 2723 Cruger Ave. in the Bronx, N.Y., and 7442 S. Maplewood Ave. in Chicago. But non-bank commercial real estate owners with offices in London or other U.K. cities don't have the same resources as banks and may push off buying additional U.S. properties in the near term.

For owners as for lenders, a lot depends on whether Brexit will turn out to be an event that causes a short-lived shock to the system or more far-reaching changes. With a stable pound and euro, the stability of the U.S. market could outweigh any currency risk. If things get bad for owners and the pound is weak, though, owners could potentially seek to realize gains on the exchange rate and sell their properties.

The multifamily property 2723 Cruger Ave. in New York City is owned by HSBC. Like U.K.-based lenders, other European (non-British) banks such as Deutsche Bank and Credit Suisse will have to weigh the benefit of increased stability in the U.S. commercial real estate market against the risk of increased cost of capital if the euro is unstable or weak, which puts them at a disadvantage to U.S. banks.

In a situation involving a risky exchange rate, the most conservative option could be retaining the status quo and recycling the money that's already in the U.S. Arguments for more conservative behavior include Deutsche Bank's sizeable London exposure and the International Monetary Fund's report last week stating that, among global systemically important banks, Deutsche "appears to be the most important net contributor to systemic risks." (HSBC and Credit Suisse are next in line.)

Even if Deutsche were to hold off on putting more money into U.S. properties for now, though, there would still be plenty of financing floating around: Deutsche Bank issued $39.3 billion in commercial real estate loans across the U.S. in 2015 alone. Of that financing, $4 billion went for New York City properties, $1.13 billion for Chicago, and $869 million for Los Angeles. And in Georgia, the Courtyard Atlanta Duluth/Gwinnett Place hotel in Duluth is one of a portfolio of 65 Marriott Courtyards financed by a $670 million loan issued by Deutsche Bank last year.

One potentially positive Brexit outcome for Deutsche is that if the U.K. does pull out of the EU, that would leave Germany as the financial capital of the EU, as well as the No. 1 candidate for banks to move to if they end up relocating from the U.K. That could put Germany in a very strong position, from which Deutsche would benefit and potentially increase U.S. lending.

Although big U.S. banks such as J.P Morgan and Citibank have exposure to the U.K., that doesn't mean they will back away from lending there altogether. They actually have an incentive to do quite the opposite. U.S. banks could take advantage of the favorable exchange rate, which cuts the cost of capital for them to lend in Britain and Europe.

U.S. lenders are in a strong position to increase lending in Europe. The Courtyard Atlanta Duluth/Gwinnett Place hotel in Duluth, Georgia, is one of a portfolio of Marriott Courtyards financed by a $670 million loan issued by Deutsche Bank last year.

That doesn't mean it will be a free-for-all. Even if U.S. banks issue more loans in the U.K. for less than it would otherwise have cost them, they can be expected to take into account the risk of default and general economic instability by opting for more conservative, stable properties such as trophy buildings. Because their cost of capital for U.K. lending will be lower given the exchange rate, U.K. investment does not necessarily have to mean cutting back on U.S. commercial real estate, since they will effectively be getting more for less money. Of course, if Brexit were to trigger a global recession, all bets are off.

Foreign lenders (not based in U.K. or EU)

In the midst of risk, people seek a safe haven. This is where the U.S. market stands to benefit. Foreign lenders and owners that are less exposed to a weaker pound or euro, like Bank of China and Chinese insurer Anbang, could well take funds earmarked for the U.K. or the EU and divert them to more stable assets such as U.S. properties.

In addition to its extensive New York City lending, the Bank of China was also one of the biggest foreign lenders in Chicago last year, issuing more than half a billion dollars in just three loans.

It's too early to know exactly what the ramifications of Brexit will be, but by looking at the kinds of calculations that different types of commercial real estate players need to make and at the financing that's already in play, we can begin to develop some insight into a post-Brexit future.