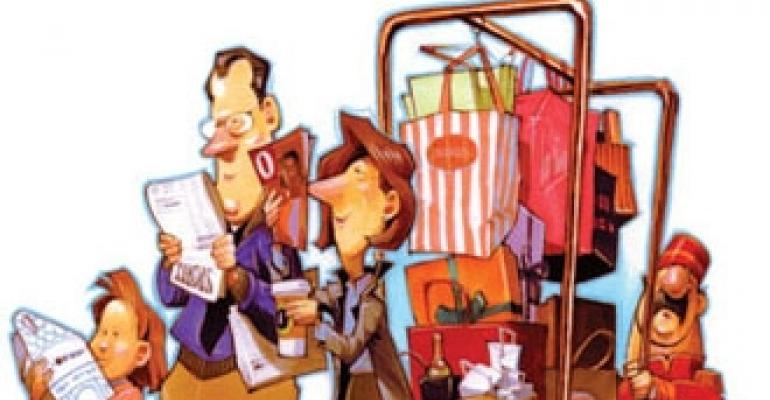 When developers of mixed-use projects started adding hotels into the mix about five years ago, the idea seemed like a partnership made in heaven. Retail centers and hotels complement each other by generating new business and traffic.

Having a hotel on site, with its constant flow of visitors, pumps new dollars into a retail center every two days, says Emerick J. Corsi, executive vice president of development in the commercial group of Forest City Enterprises, Inc., a Cleveland-based diversified real estate operating company. Restaurants usually benefit the most, as travelers search for a convenient place to eat. But hotel guests might also forget to pack minor items or need to buy a gift for someone at home or be in a mood to see a movie. So the dollars trickle into stores and entertainment venues throughout a project.

Meanwhile, from a hotel owners' perspective, being located within walking distance of a convention center and having food and entertainment amenities on site serves as an added draw for potential tourists and business travelers, notes Lynn Cadwalader, partner and co-chair of the global hospitality group with the international law firm Holland & Knight. In fact, a location in a mixed-use center can boost revenue per available room (RevPAR) by 20 percent to 30 percent, estimates Donald J. Bredberg, CEO of Stonecreek Partners, LLC, a Westlake Village, Calif.–based real estate services firm. And since hotel developers often have the option of bringing a branded condo component into a mixed-use project, the arrangement makes construction financing easier to obtain because proceeds from condo sales provide the builder with extra equity.

In recent months, however, this idyllic relationship between retail and hospitality sectors has been tested by a deep recession and cutbacks in both corporate and personal spending. While retail real estate has been hammered by rising vacancy levels and falling asking rents, owners of hospitality properties seem to be faring worse than every other niche of commercial real estate. Hotel metrics across the board are down steeply from 2008 and even further from 2007 peaks. In fact, the contraction in the hotel sector has now been more dramatic that the one following 9-11.

For example, the minimum profitability threshold for hotels requires occupancy levels of about 50 percent, according to Marcus & Millichap Real Estate Investment Services, an Encino, Calif.–based national brokerage firm. In April, average occupancy rates at all hotel types dipped to 56.4 percent, down from 63.5 percent in 2008, according to Hendersonville, Tenn.–based Smith Travel Research. The weakness was across all property types and all regions. That represents an 11.1 percent drop year over year. Meanwhile, average daily rates (ADR) are down 9.4 percent and RevPAR is down 19.5 percent.

Given the widespread reach of this recession, a meaningful recovery in the hospitality industry will probably take another year and a half, notes Bruce Stemerman, managing director of strategic advisory and asset management with Jones Lang LaSalle Hotels, a firm specializing in hotel real estate.

This presents a dilemma for owners of mixed-use properties, who need to start generating profits as soon as hotels are out of the ground, according to Bredberg. Converting a completed hotel facility into another use is problematic, he notes, because of the very specialized structure of the product type. Rebranding a five- or four-star hotel into a more affordable flagship might make sense, but hotel management agreements are often airtight. As a result, hotel owners have been looking at another solution—bringing in independent third-party managers who could run the hotel under the same brand for less.

Out of the lap of luxury

The next few years could see a shift toward more affordable hotel brands in mixed-use developments, notes Stemerman. At the height of the mixed-use craze, properties that sprang up in dense urban markets, such as Time Warner Center in New York City and 12th and Midtown in Atlanta, tended to feature five-star hotels. Those located in suburban settings had a more modest focus on three-star operators, like Courtyard by Marriott or Sheraton. Now, however, developers brave enough to embark on mixed-use projects would do well to focus on cheap chic hotel concepts, according to Stemerman.

Stemerman sees potential for low-cost, high-style operators to emerge, similar to what's happened in the apparel sector.Firms like H&M and Uniqlo built businesses on selling trendy clothes at affordable prices. "It's very economically priced clothing, but presented in a cool, modern way," he says. "That's where we are heading to" on the hospitality side.

One example of the kind of brand that could thrive in coming years is Starwood Hotel's Aloft, which offers high-speed internet access, a flat-screen LCD TV and a modern feel for less than $160 per night. By contrast, a stay at a Westin (another Starwood brand) in the same area would cost more than $260 per night.

Given the current market environment, developers with mixed-use projects on the drawing board might want take into account whether there is enough built-in demand, says Douglas Thimm, vice president and principal with MHTN Architects, Inc., a Salt Lake City–based architecture and interior design firm. A property located near a convention center or a major sports stadium could support a hotel even in a downturn. A suburban mixed-use center with no draw for outside visitors might suffer a big drop in occupancy when business conditions turn dire. Developers might also need to ask themselves whether the retail center will be the dominant one in the area, adds Forest City's Corsi. "Travelers are looking for a place that's convenient to the offices they'll be visiting, that is surrounded by a daytime population and that features restaurants and entertainment," he says. "If you have those details, you can add a hotel."

In May, for example, Forest City and LTD Management Co., a Chesapeake, Va.–based hotel developer and manager, opened a 151-room Hyatt Place at White Oak Village, Forest City's 900,000-square-foot mixed-use center in Richmond, Va., which according to Corsi, is the dominant retail destination in the area. Rooms at the three-star hotel range from $132 to $154 per night and include 42-inch flat-screen HTDVs and wireless access.

For the next several years, however, most developers will likely concentrate on repositioning existing mixed-use properties rather than building new ones, notes Cadwalader. Part of the repositioning might involve thinking up ways to increase profitability of hotel components as the hospitality sector struggles with falling demand. In that case, bringing in third-party management in place of existing brand operators might make the most sense, according to Cadwalader.

As a general rule, owners don't want to give up the star rating of their hotel—that might put off visitors, as well as leave a bad impression on office users and shoppers who frequent the complex. What they want to do in a challenging environment is bring down operating costs and that might mean paying an independent firm to operate a Four Seasons or a Ritz Carlton property at a fraction of the price. The trick is that to avoid legal battles, third-party managers need to be approved by the original brand.

Still, when switching to an independent manager, having a lower tier hotel might turn out to be an advantage, as brands with ratings below four stars cooperate with a wide network of third-party managers, whereas an operator of a Four Seasons or St. Regis caliber might approve of only a handful of firms. "The lower you move down the chain, the more sophistication there is in separating the flag from the management," Bredburg notes.