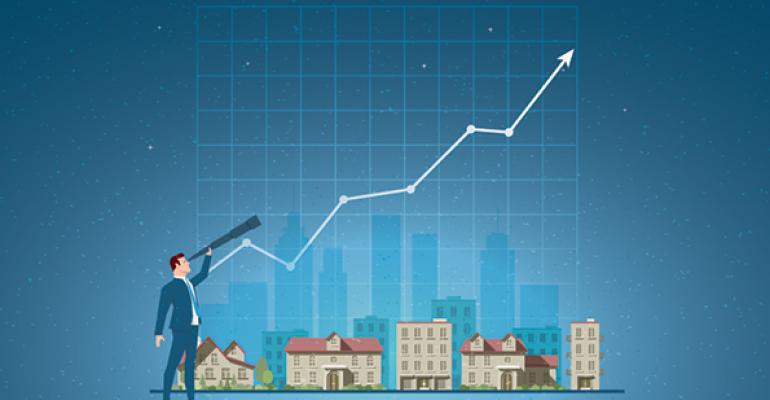 It has suddenly gotten a lot more difficult to borrow money for an apartment property.

“The overall cost of borrowing has gone up undoubtedly,” says Peter Smyslowski, managing director in the San Francisco office of capital services provider HFF. “But the interest rates spreads offered by lenders are very similar to the spreads they offered last year.”

Long-term interest rates rose by well over 50 basis points in the last months of 2016, as the yield on the benchmark U.S. Treasury bonds took off after the victory of Donald Trump in the presidential election. That will make it tougher for borrowers to make deals work. Meanwhile, lenders have not shifted the terms they offer or bent their underwriting requirements to help close deals.

Experts have been waiting for years for interest rates to rise from their historic lows and the rate increase so far is likely just the beginning.

“Most experts think the general trend is more rates to continue to rise,” says Mitchell Kiffe, co-head of national production for the debt and structured finance group within CBRE Capital Markets.

The increase started when the Federal Reserve raised its key rate by 25 basis points in December. In addition, “The Fed has indicated that it envisions two to three rate increases in 2017,” says Kiffe. At a likely 25 basis points per increase, that would add up to another 75 basis points.

The yield on 10-year Treasury bonds was roughly 2.3 percent early this week, up from about 1.75 percent just before the election. “The yield on the U.S. Treasury is expected to increase somewhat over the year,” says Kiffe. However, “given the lack of clarity over specific policies that the new Administration will propose and get enacted, it is possible rates will flatten out as growth and inflation expectations may not be as robust as the markets initially thought.”

Lenders are not easing their underwriting requirements to help borrowers who may be struggling to make deals work because of higher interest rates. If anything, they are looking more skeptically at the prices buyers are willing to pay for assets relative to the income from the properties.

“Lenders are normalizing capitalization rates because they are concerned about where we are in the real estate cycle,” says Justin Bakst, director of capital markets with research firm CoStar.

Lenders are also looking more skeptically at the claims of borrowers who think they can raise the rents at their properties. “There is a sensitivity to underwrite rent growth—in core markets that has all flattened out,” says HFF’s Smyslowski.

Borrowers who want to buy apartment properties may have to put in more of their own money into the deals, because the amount of debt a property can support shrinks as interest rates rise. “Lenders are also not lowering their debt service coverage ratios or debt yield to maintain loan proceeds this far,” says Kiffe. Lenders are no more likely to offer borrowers longer periods in which they only pay the interest on their loans.

That said, the balance of competition between lenders has not shifted much as long-term interest rates rise. “We expect the trends of 2016 to continue with the government-sponsored entities being a significant presence,” says Kiffe.

Life insurance companies, banks and even conduit lenders are also still eager to make deals, even if they aren’t bending much on their underwriting. “Not much has changed,” says HFF’s Smyslowski. “There is still available liquidity.”